Plummeting costs have made renewable energy sources the most inexpensive option for new power generation throughout most parts of the world, according to a new study.

The findings come from the International Renewable Energy Agency (IRENA) in its new report, Renewable Power Generation Costs in 2018. The comprehensive study determined that costs “from all commercially available renewable power generation technologies” dropped in 2018:

Furthermore, the agency expects that of projects set to be commissioned in 2020, more than three-quarters of onshore wind and four-fifths of utility-scale solar PV “should provide lower-priced electricity than the cheapest new coal-fired, oil or natural gas option.” 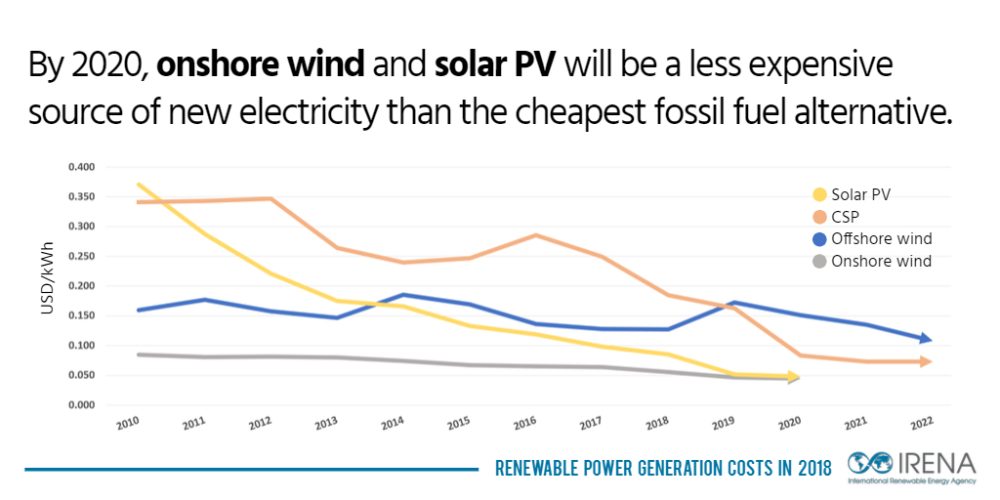 IRENA also outlines where some of the lowest prices have been seen thus far:

Onshore wind and solar PV costs between three and four US cents per kilowatt hour are already possible in areas with good resources and enabling regulatory and institutional frameworks. For example, record-low auction prices for solar PV in Chile, Mexico, Peru, Saudi Arabia, and the United Arab Emirates have seen a levelised cost of electricity as low as three US cents per kilowatt hour (USD 0.03/kWh).

While many of the numbers in the report concentrate on new power generation, the analysis also notes that “new solar PV and onshore wind are expected to increasingly cost less than the marginal operating cost of existing coal fired power plants.”

This conclusion pairs with a March report which found that in the US alone, constructing new wind and solar projects would be cheaper than continuing to run 74 percent of existing U.S. coal plants as of 2018.

IRENA’s findings are based on global averages, as costs per project — and per country — will vary. The full 86-page report offers a more complete breakdown.

How Low Can It Go?

“Renewable power is the backbone of any development that aims to be sustainable. We must do everything we can to accelerate renewables if we are to meet the climate objectives of the Paris Agreement. Today’s report sends a clear signal to the international community: Renewable energy provides countries with a low-cost climate solution that allows for scaling up action.”

The agency believes cost reductions will continue into the next decade, and the study’s conclusive findings echo La Camera’s words:

Very low, and falling, costs of electricity for solar PV and onshore wind, as well as cost reductions for CSP and offshore wind until 2020 and beyond, make renewable power the competitive backbone of the global energy sector transformation.

IRENA’s Global Energy Transformation report released in April concluded that renewable electricity paired with electrification could reduce CO2 emissions by 60% in total, and the combo could also meet 75% of the total energy-related emission reductions necessary to meet global climate goals, as established by the Paris Agreement.

Renewable costs keep dropping, even exceeding the expectations of the experts on a regular basis. Battery storage prices have also been falling faster than expected, and smart grid projects are advancing, as well. Pair all of these with the rise of electric vehicles, green manufacturing and you’ve got a rough outline of a sustainable future.

But the time to embrace that future has already arrived — it’s time to further accelerate our deployment of renewable energy, and to increase those investments which “stalled” last year. Because we need it.