Paris, like many large International cities, has not been immune to the electric scooter phenomenon. As thousands of electric scooters have flooded Paris streets over the last year, the city has made efforts to curtail their expansion. Now Paris’ Mayor has announced that the scooters will no longer be able to park on the sidewalk and has attempted to severely limit the speed of the electric scooters across the city.

Electric scooters are everywhere in Paris

As a geographically small yet densely populated city, Paris has seen an explosion in popularity of electric scooters.

The city is small enough that that scooters can reach just about anywhere, yet large enough that walking isn’t always a convenient option.

But as useful as the electric scooters are for riders, they have become a problem for non-riders, i.e. everyone else. With the notoriously narrow streets and sidewalks of Paris, electric scooter riders and pedestrians have often struggled to share sidewalk space safely. That led to a ban on electric scooters riding on sidewalks in Paris last year. Instead of riding sidewalks, scooters were forced to ride on the road or in bike lanes. But scooters were still allowed to park on the sidewalk, or at least until now.

The Mayor of Paris has just announced a complete sidewalk ban on electric scooters, which includes both riding and parking. The electric scooters can now only be parked in designated parking spots for cars or motorcycles/mopeds.

In addition, the Mayor has asked electric scooter companies to limit their speeds to 20 km/h (12 mph) across the city and down to just 8 km/h (5 mph) in areas with high pedestrian traffic.

Both Lime and Bird have complied by reducing the speed of their scooters to 20 km/h city wide, and provided the following statements to Electrek.

“Over the weekend, Lime made the decision to reduce the speed limit of scooters to 20 km/h in Paris and 8 km/h in pedestrian areas. Lime has a strong desire to maintain a constructive partnership with the municipalities of the cities in which it operates. This quick response to a new measures announced by the mayor of Paris at a press conference last Thursday demonstrates Lime’s commitment to working with cities and serving the needs of a growing number of Parisians. Since arriving in Paris almost a year ago, Lime has been driven by a long-term vision and by the ambition to play a responsible role as a leader of new mobility.”

“Bird is committed to helping Paris become cleaner and greener by giving people an environmentally friendly alternative to car trips. More than 300,000 people use our service saving an estimated 800,000 kilograms of CO2 emissions. The scooter industry is less than a year old in Paris and we’re still learning. We immediately implemented the new speed restriction and we look forward to working with the city so we can continue to provide the service that so many Parisians have come to rely on.”

This one is a tough one for me. I can legitimately see both sides of the coin here.

On the one hand, I think the electric scooters have totally changed Paris for the better. When Electrek attended the Paris Motor Show last year, we got around almost entirely on Lime scooters.

The scooters made it so much more fun to see the city as we traveled around, as opposed to being cramped in the back of an Uber without really being able to take in the city.

However, we definitely discovered that the bike lane system could use some work. In some areas, there were wonderful bike lanes. In others, the bike lanes were cobblestones that made the ride so rough that our vision literally blurred. In many areas the bike lanes were simply nonexistent, leaving us deciding between mixing it up with cars or potentially weaving around pedestrians on the sidewalk (this was pre-sidewalk ban).

Obviously, no pedestrian wants to get taken out by a 25-30 km/h (15-18 mph) electric scooter while on their way for a morning croissant, so something’s got to give.

Angry scooter-protestors made their sentiment abundantly clear. Here’s what a Parisian did to a scooter on my morning route. 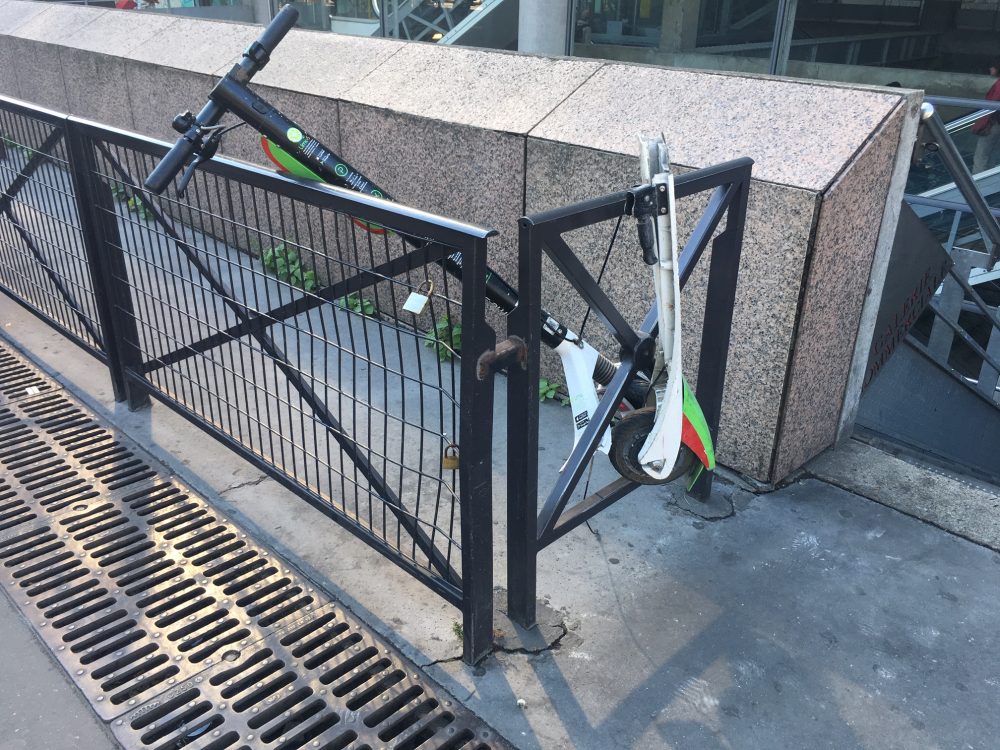 I support the sidewalk riding ban, because that just makes sense. These things are dangerous to pedestrians.

Regarding the sidewalk parking ban, while it sounds good in theory, it may be fairly tough on everyone. Riders will find it harder to locate an available scooter. Scooter companies will have fewer riders, as the inconvenience will push more people into the back of Ubers. And surely drivers are going to be pissed when parking spots are taken up by scooters. You know how annoying it is to finally find a parking spot in a busy lot, only to pull up and realize there is a motorcycle in it? Imagine that but with a few electric scooters.

Surely these laws and restrictions are headed in the right direction, but I worry they could be overly limiting. I’d rather see Paris charge the scooter companies more money to operate, and then put that money into building better bike/scooter lanes. But hey, that’s just my two Euro cents.