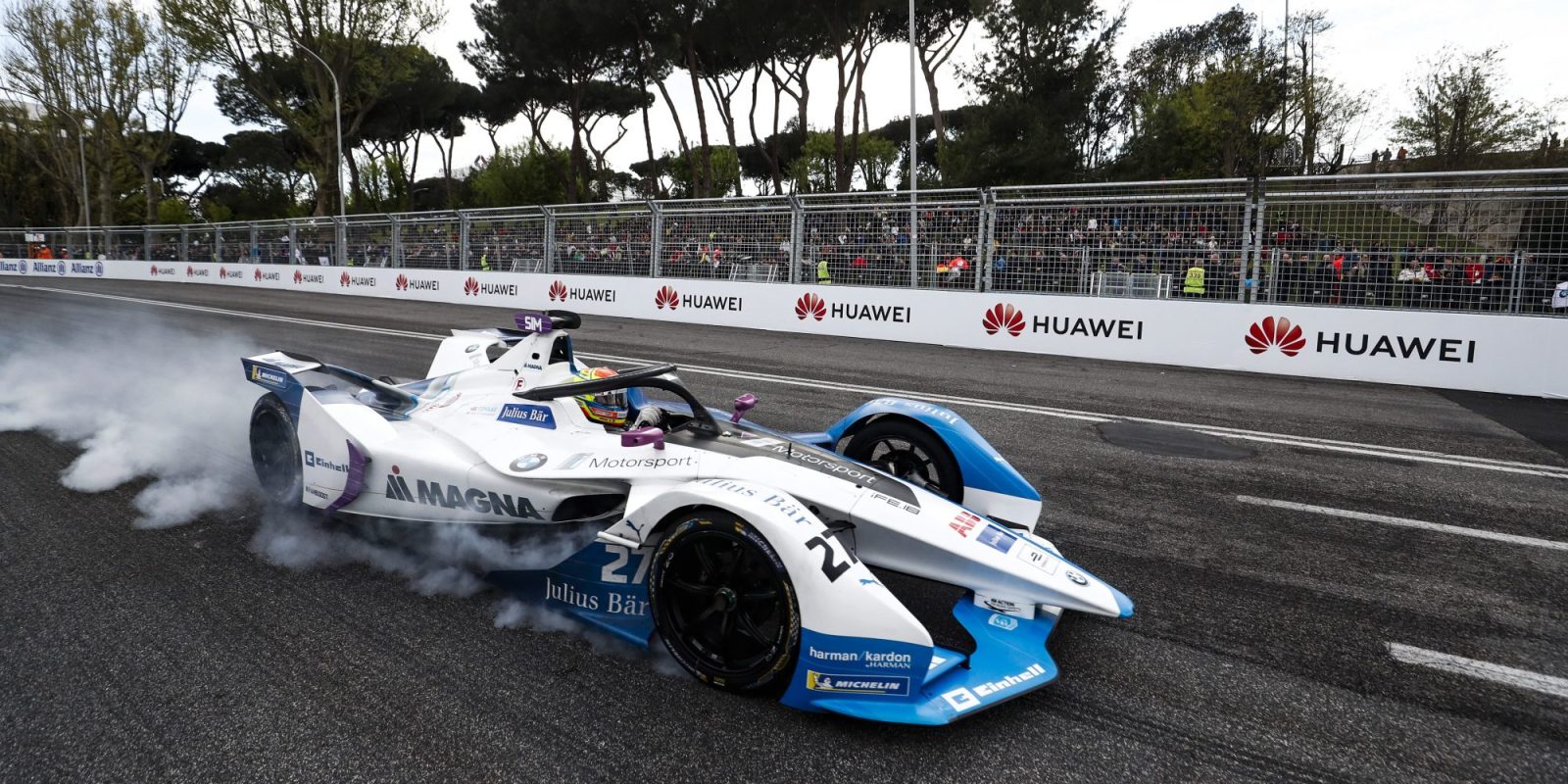 The exciting, close racing of this Formula E season continues this weekend in Paris.  Last race in Rome was the seventh race of the season and again we had a new winning driver and new winning team.

Before we talk much more about last race’s results, here’s the full race on Formula E’s YouTube page. Have a watch if you’d like. You can also visit the bottom of this post for a shorter video of last race’s highlights.

We had a few driver changes, with Alex Lynn replacing longtime Formula E driver and season 1 champion Nelson Piquet Jr. at Jaguar and Maximilian Gunther coming back to Dragon to replace Felipe Nasr – who had previously replaced Gunther.  Dragon seems to be on a race-to-race arrangement with their drivers at the moment.

The Rome ePrix started out as many have before – with the threat of rain looming.  Qualifying was wet, and cars were quite squirrelly around the track. Andre Lotterer qualified on pole, giving us the 7th different polesitter in 7 races.

The wet surface promised to make for a chaotic race if the track stayed wet, particularly since a large bump in one part of the track, combined with this season’s faster cars and Formula E’s low-downforce design, had created a “jump” where cars would actually lift off the track at high-speed.

Alex Lynn’s car catching air – note the left wheels out of contact with the ground.

But after qualifying the rain stopped, and the track began to dry.  By the time the race started, it was still mildly wet, but not quite enough to call this a true wet race.  Five seasons in, and Formula E has still never had a real wet race.

The track was wet enough for some first lap chaos, with Gunther and Alexander Sims both going into the wall on the first lap.  Jose Maria Lopez and Sam Bird battled for a few turns as well, until Lopez spun Bird going into the chicane and knocked him out of the race.  Bird, former championship leader, was out on the first lap for the second race in a row.

But soon, Lopez came back to the chicane and lost control, crashing into the wall and causing Gary Paffett and Jean-Eric Vergne to hit him from behind.  A ~10 car pileup formed behind them which obstructed the track completely and brought out the red flag.  The race was still officially on the first lap, due to different placements of the start and finish line.

The red flag lasted quite a while, which allowed all the cars which went out on the first lap to limp back to the pits.  Team mechanics were the heroes of the day, getting every car back onto the track for the restart except Paffett.

By the time the restart came, the track was completely dry, and the first lap this time around was a lot less chaotic.

The rest of the race settled into an exciting lead battle between polesitter Lotterer and Mitch Evans.

Evans used attack mode to catch Lotterer and on the last lap of his attack mode activation, he made a rude lunge going into the chicane, bullying Lotterer almost into the wall and driving past into the lead.  It was quite a rough pass, but fair, as he did leave Lotterer space not to hit the wall and contact was extremely light.  He earned a warning but no penalty.  “Rubbin’ is racin’,” they say.

Lotterer tried to fight back with his own attack mode activation soon after, but was unable to pass Evans.  The race for the lead was close all the way through.

By the end, several cars including the leaders were borderline on their energy usage, and may not have had enough energy to finish the whole race.  So Evans slowed the pace by about 5 seconds on the penultimate lap, letting the clock count down to trigger the “final lap” of the race one lap earlier, giving everyone a reprieve and allowing everyone to finish comfortably in terms of energy use except for Gunther – who had an exceptionally poor first race back, crashing, getting a penalty, and then running out of energy.

Evans managed to hold onto the lead for the win, with Lotterer just behind and Stoffel Vandoorne picking up his first podium.  It was the first race win for Evans and for the new Jaguar team.

For a race with so much first lap chaos, including a pile-up which included half the field, all but 3 cars managed to finish.  And despite the narrow track without many options for overtaking, the race at the front made this one exciting.

The casualties of the race were Eduardo Mortara and Felipe Massa, the two Venturi drivers, who both retired with what seemed to be similar drivetrain issues, a few minutes apart from each other.  Both were running in the points at the time of their retirement.

Strangely, despite him being nowhere near the podium, this race put Jerome D’Ambrosio back on the top of the championship.  He finished only 8th, but his close competitors finished behind him.  Now the top 8 competitors are all close, with the top 4 only covered by a 4 point gap.  The parity level of this series is insane.

One reason we’ve been seeing so many polesitters is due to Formula E’s qualifying format, which puts championship-leading drivers in the first pack of cars to qualify.  This means the track is more “green” for them, with some dust on the racing line, which makes it a little less grippy and hurts their lap time.  The effect is small, but when cars are so close in performance, it can make a big difference.

Before the last race, in what seems to have been a coordinated effort, several leading drivers complained to the media about this qualifying format, calling it unfair and wanting a more traditional format.

But in so many motorsports series, winners are so predictable, because once one team gets an advantage, that advantage tends to compound.  Starting at the front gives you more chances to avoid accidents in the pack, less traffic to deal with, lets you run less risky strategies, and so on.  It’s rare to see championship battles so close.

And it’s not like nobody can pass in Formula E.  If a driver qualifies lower in the field than he feels he deserves, he’ll be able to get up front.  Between car parity, attack mode, and low downforce, Formula E has more passing than most anything out there.

We’re still seeing some drivers and some teams rise to the top, and they’re the drivers you would expect to see – ones who’ve run well in the past, or who’ve done well in other top-level racing series.  So driver quality is still important, and still influences the season standings.

So this qualifying change not only makes the races more exciting for viewers – and after all, that’s what we’re all here for, right? – but makes it more fair for racers, by letting everyone get a crack at pole or a win.

The Paris ePrix circuit is at the heart of Paris around the famous “Les Invalides'” complex, a monument to France’s military history and former hospital for veterans.  The complex is transformed into a track for the Paris ePrix.  This is the fourth year the race has been run in Paris around the same complex.

The track is tricky here, given that some sections of the track go over a cobblestone area, which need to be paved over temporarily to host the race.  These inconsistent surfaces result in different grip levels around the track, adding to the challenge of this street track (as compared to permanent circuits).

Vergne and Lucas di Grassi have done well here in the past, both with two podiums – a win and a second place each.  Bird often runs well too.  Look out for Vergne, who will surely be looking to do well at his home race.  He’s had inconsistent results this year, but is still within reach of the championship, in 7th place and 11 points down from the lead.

The teams’ championship continues to be a toss-up, with Mahindra sinking from their early prominence and now back in 4th place.  They’re still within a shout, though, with the top 4 teams covered by a 14 point gap.  Techeetah is in front with 116, Virgin has 109, and Audi and Mahindra both have 102.  BMW lags behind with 82, and the rest of the teams are falling further out of reach.

Venturi in particular has been having a rough time of it.  Their drivetrain has been having problems, with both of their drivers retiring in the last race with similar issues.  Even more worryingly, Vandoorne’s driveshaft failed on the cooldown lap after Rome.  Vandoorne drives for HWA, whose drivetrains are supplied by Venturi, which makes 3/4 of Venturi drivetrains which failed in one race.  Vandoorne’s finish was only the second points finish for HWA this year.

If we had to pick a “new team” to get a win, it looks like Nissan is the only one with a reasonable shot of it.  Their performance has been middling all year, but they have a former champion driver in Sebastian Buemi and they have pulled off a 2nd place finish.  The rest of the teams seem too close to the back to have a shot.

But hey, it’s Formula E, and anything can – and probably will – happen.  Tune in to see if it does, this Saturday.

The Paris ePrix is on Saturday April 27th. The race starts at 7am PDT/10am EDT, 2pm UTC, 4pm local Paris time. Head to Formula E’s website to learn how to watch the race in your country.