Sono Motors, a German EV startup, announced today that it will build the crowdfunded solar-powered Sion EV at a manufacturing facility formerly owned by SAAB in Trollhättan, Sweden.  The plant is owned by National Electric Vehicle Sweden (NEVS), a holding company which acquired most of SAAB’s assets after its bankruptcy.

The Sion is a small, sleek-but-plain, minivan-like electric car with a 35kWh battery good for 255km (158mi) on the WLTP cycle (so, perhaps more like 120 EPA miles).  While this battery seems a little small compared to today’s EVs, the Sion is aimed at the European city market, with lower mileage and slower speeds.

What’s most interesting about the Sion though is the large solar panel on the roof of the car.  Sono states that this panel is large enough to provide “up to” 34km (21mi) of range per day – though we don’t know if that’s on California sun or Sweden sun (there is a significant difference due to latitude).

The car is also equipped with a bidirectional charger, meaning that the battery and solar panel can be used to power devices offboard the car.  Theoretically, if the power went out, you could plug your house into your car and run some lights and low-draw appliances – and could even keep recharging the car’s battery with solar while you’re at it. 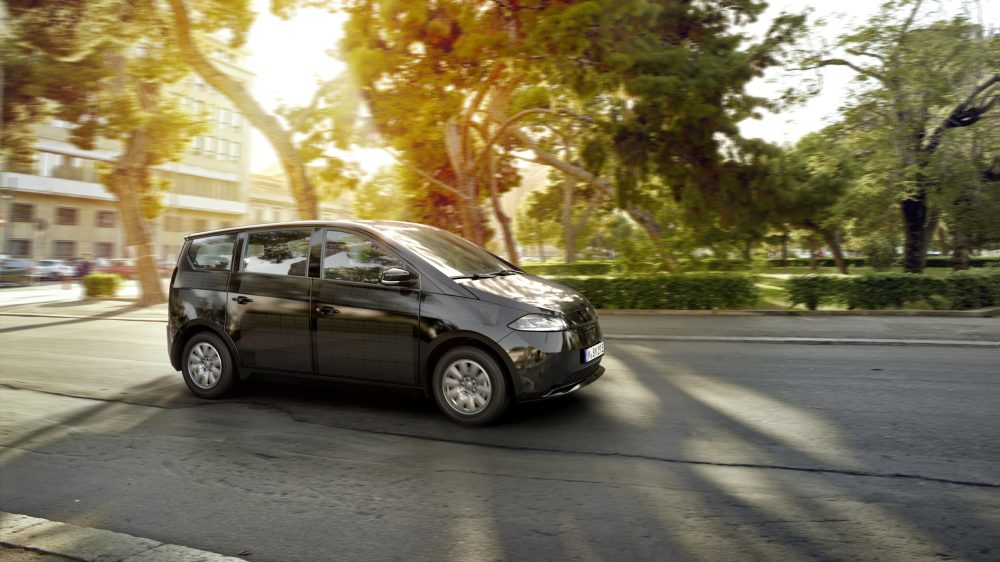 The Trollhättan assembly plant operated from 1947 until 2011.  At its peak, Saab produced around 125,000 cars per year, most of which were built at Trollhättan.  Saab declined significantly around the turn of the century, and the company went bankrupt in 2012.

NEVS acquired Saab’s assets, and has started using them to produce electric versions of Saab’s old sedans for the Chinese market.  In 2017, the first electric 9-3 rolled off the lines.  They’ve received some big investment too, with former Faraday Future investor Evergrande plowing $2 billion into NEVS earlier this year.

Sono Motors isn’t the only company which NEVS has been involved with.  In January, Swedish hypercar maker Koenigsegg took $170 million in investment from NEVS with an emphasis on electrification of Koenigsegg’s upcoming hypercars.  Christian von Koenigsegg, a legend in hyper-performance vehicles (who also owns a Tesla Model S and loves it), recently went on record saying that he was “embarrassed” by the crazy performance specs of Tesla’s coming next-gen Roadster.

So NEVS seems to be throwing their weight around quite a lot.  Now they’re putting their Saab assets to good use in producing the Sion.

The plan is to eventually reach a peak production rate of 43,000 vehicles per year.  With a total of 260,000 vehicles over 8 years, this suggests they’ll take 2-3 years to reach that peak rate.  The company currently has 9,800 preorders, so if production starts slow, it might take a little time to work through those orders.

Sono also states that they want to expand to other vehicle models on the same platform, though they have offered no details yet on what those vehicles might be, or who they might contract with to manufacture them.

For the most part, solar panels are better on the roof of a house than the roof of a car.  We’ve seen cars before with solar panels on the roof (Fisker, Prius) and they haven’t provided nearly enough electricity to make a difference.  Even with the Sion’s small footprint, likely low weight, and very flat roof, it’s still only going to be able to supplement the battery, except for very low mileage drivers in optimal sun conditions.

Nevertheless, this is the least-gimmicky solar-equipped car we’ve seen, and comes in at a reasonable price given its specs even without taking the solar panels into account.

If the solar panels work as well as Sion says they do, there are a lot of possibilities for a car like this.  Between the battery and solar panels, it could be a great car to go camping in – or a full-on “vanlife” vehicle.  Bidirectional charging capability also opens up a lot of possibilities.  We recently had a long conversation with Nissan/Fermata energy about said possibilities, which are quite exciting from a grid perspective.

So we like the Sion a lot, and it’s great to see it getting produced, in real numbers, at a real factory.

There are so many EVs which come along and get small releases, or get big commitments which end up being pared down over time.  But 43,000 cars per year is nothing to sneeze at, at least for a startup. That’s about a third of what Saab used to sell worldwide each year.  It may seem small compared to the major auto manufacturers, but if Sion can pull off their production plan, this will be a tremendous success.

And with what looks like a great little car, they seem like they’ve got a good chance of doing so.  I’d be tempted to get one if it were available in California, honestly.

See Sono’s press release, and tell us what you think about the car in the comments below.

First series production SEV to be manufactured at former SAAB plant in Trollhättan.

Munich, April 17, 2019 – The first series production solar electric vehicle (SEV) developed by the German mobility provider Sono Motors is to be manufactured in Sweden. As Sono Motors officially announced today, the first generation of the Sion will be produced in Trollhättan by National Electric Vehicle Sweden (NEVS). The plant located there was home to the production lines of the long-standing and innovative automobile manufacturer SAAB. In total, an initial 260,000 vehicles will roll off the production line in Trollhättan over an eight-year period. Production will commence in the second half of 2020. After the ramp-up period, approximately 43,000 Sion a year will be manufactured in two-shift operations. Production will be carried out using one hundred percent renewable energy.

“In NEVS, we found the perfect partner for us,” says Thomas Hausch, Chief Operating Officer, Sono Motors. “Together, we share a vision of intelligent and resource-conserving mobility. We also value our partner’s specific expertise based on their many years of experience in traditional automobile development and production in combination with proven expertise in the area of electromobility.”

The innovative vehicle concept of the Sion already represents tomorrow’s mobility today – the aim of which needs to be the reduction of vehicles on the roads through more sustainable and more efficient usage. The Sion will therefore be equipped ex works with integrated sharing options. These enable the owner to share the vehicle itself, individual journeys, or even energy via a mobile application (goSono app), developed by Sono Motors. A bidirectional charging function enables the Sion to both receive and supply electricity, power electrical devices independently, and feed energy to other vehicles or into the electricity grid. Thanks to full-surface solar integration, the vehicle battery can be charged with pure and free solar energy worth up to 34 kilometers’ range per day in addition to its regular WLTP range of 255 kilometers.

For its market launch, the Sion will be rolled out in one single variant version costing 25,500 euros. There are plans afoot to develop other vehicle models based on the vehicle’s platform.

Since the presentation of the prototypes in summer 2017, the Sono Motors team has been going on test drive road shows all over Europe. On the occasion of the cooperation with NEVS, the next road show will take place in Sweden. Sono Motors has so far taken approximately 9,800 partially paid preorders for the Sion.

The innovative and owner-led automotive company Sono Motors was founded in 2016 based on the vision of a sustainable mobility concept independent of fossil fuels. The company now boasts an experienced team of engineers, designers, technicians, and industry experts who are developing and building a forward-looking electric car which is suitable for daily use, with integrated solar cells and innovative mobility services.

The carbon emissions generated during the vehicle’s production and manufacturing are entirely offset. The first prototypes were produced in 2017 with the support of renowned investors and crowdfunding, and have since been driven and experienced by more than 13,000 potential customers at test drive road shows. The overwhelming response to the vehicle and mobility concept confirmed the company founders’ vision and is turning it into a reality – the electric car Sion will go into series production.