Tesla crashes into river, owner claims it accelerated on its own

A Tesla Model S owner crashed his vehicle into a river near a Supercharger station in China and he claims that the vehicle accelerated on its own – in yet another alleged event of unintended acceleration.

On Wednesday, a Tesla Model S jumped into a river next to the Tesla Qingpu District Supercharger in Shanghai under some strange circumstances.

Xiao Chen was pulling into the Supercharger station when he claims that his Model S accelerated out of control.

“When the reporter rushed to the scene in Qingpu District, the owner Xiao Chen had just been rescued ashore, and the gray Tesla was still lying in the river and was soaked in the water. Xiao Chen is still in shock, he told reporters: I was from the beginning stepping on the brakes, and the car suddenly rushed out of control! It turned out that Xiao Chen and his wife drove the car to school in the morning of the incident. After the delivery, they came to the Tesla Supercharger station to prepare for charging. According to Xiao Chen, he kept driving very slowly, stepping on the brakes, but when he got there, the car was out of control.

The Model S ended up going through a fence and plunging in the river.

Fortunately, it apparently hit shallow water and both the driver and passenger were able to quickly get out – resulting in this picture: 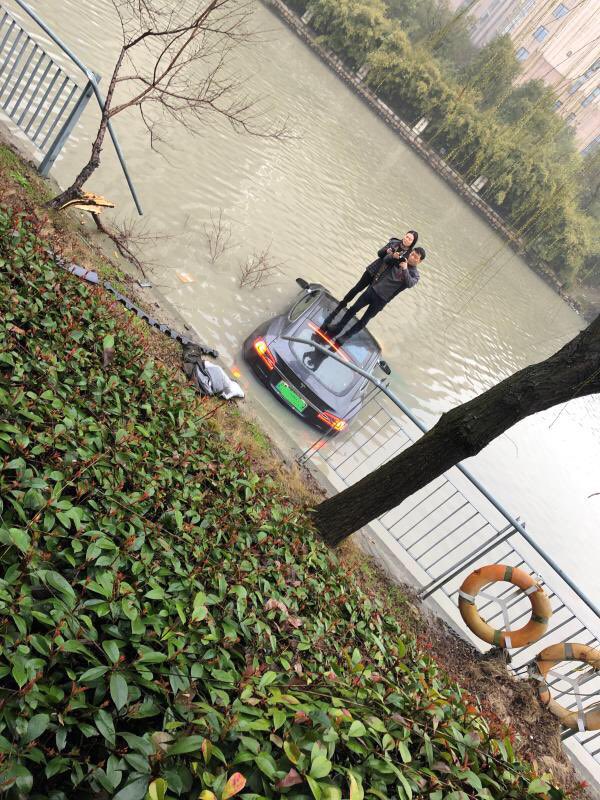 Friend of the site Jay In Shanghai also shared some footage of the Tesla Model S being lifted out of the river:

According to the local media, Tesla is investigating the situation

Tesla vehicles have been involved in several unintended acceleration events, which consists of vehicles accelerating without it being the driver’s intention – whether it is due to malfunction or driver error.

We extensively covered cases of unintended acceleration involving Tesla vehicles and we concluded that the evidence points toward pedal misapplication, including in one particular case where the logs were reviewed by a third-party.

While a problem with Tesla’s system is not completely impossible, a user error still looks more likely to me.

Tesla has safeguards to prevent an automatic system to enable a sudden acceleration like that.

I want to give the driver the benefit of the doubt, but every time we have seen similar circumstances, the logs always pointed to a user mistake.

Also, I think it’s important to note that he made the claim of sudden acceleration right after the accident and as the Chinese report states, he was still shaken at the time.

It’s difficult to admit a mistake or even recognize that you made one in a situation like that. So let’s not be too hard on him.