4-wheel eQooder with Zero powertrain unveiled – is it an electric car, motorbike, or scooter? 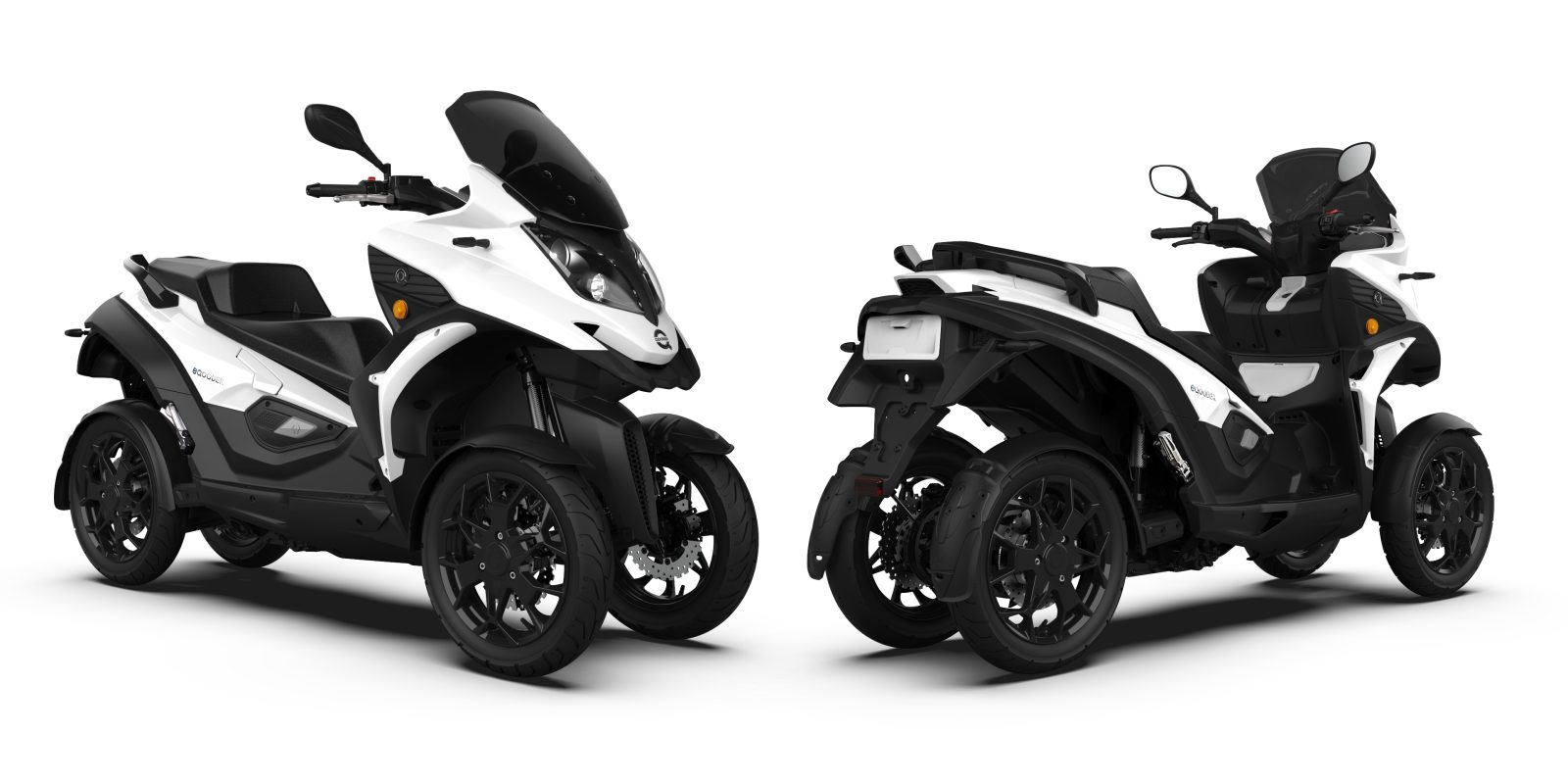 Quadro Vehicles just unveiled an electric version of their popular four-wheeled Qooder at the Geneva Motor Show. The eQooder blurs the line between electric motorbikes and cars.

Swiss-based Quadro entered into a partnership with Zero Motorcycles to develop the eQooder.

To power the eQooder, Zero supplied their Z-Force 75-7 motor.

That makes the eQooder more powerful than a number of large maxi scooters. According to the company:

“Compared to a thermal engine, eQooder’s electric motor performance is equal to a 650cc displacement. Furthermore, eQooder’s torque is three times more powerful than that of the 400cc Qooder (38,5 Nm).” 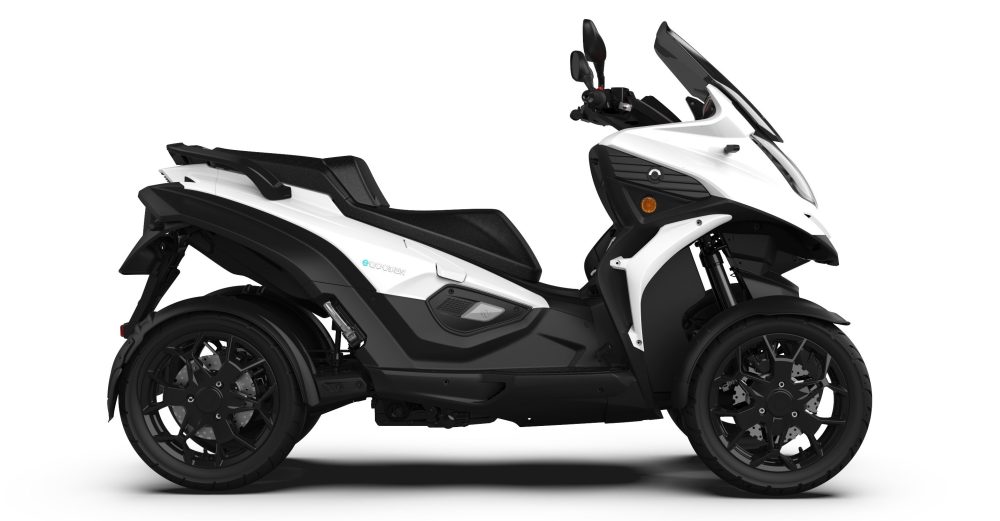 Additionally, the eQooder sports a 10.8 kWh modular battery pack also supplied by Zero. The battery has a recharge time of 6 hours. Quadro claims the eQooder has enough battery capacity to travel 150 km (93 mi) on a single charge. Or in their words:

“The eQooder will be able to travel in and out and within the historical center of Rome 150 times, cross the Paris Boulevard Périphérique 5 times, or the Avinguda Diagonal in Barcelona 15 times.”

Just in case it’s easier for you to think in terms of European metro areas.

The eQooder comes with two power modes, Eco and Sport, as well as a third mode that is user-customizable via an accompanying smartphone app. Quadro partnered with evway, an app supporting EV drivers. Together, they’ve enabled the eQooder app to show a convenient map of all charging locations nearby. 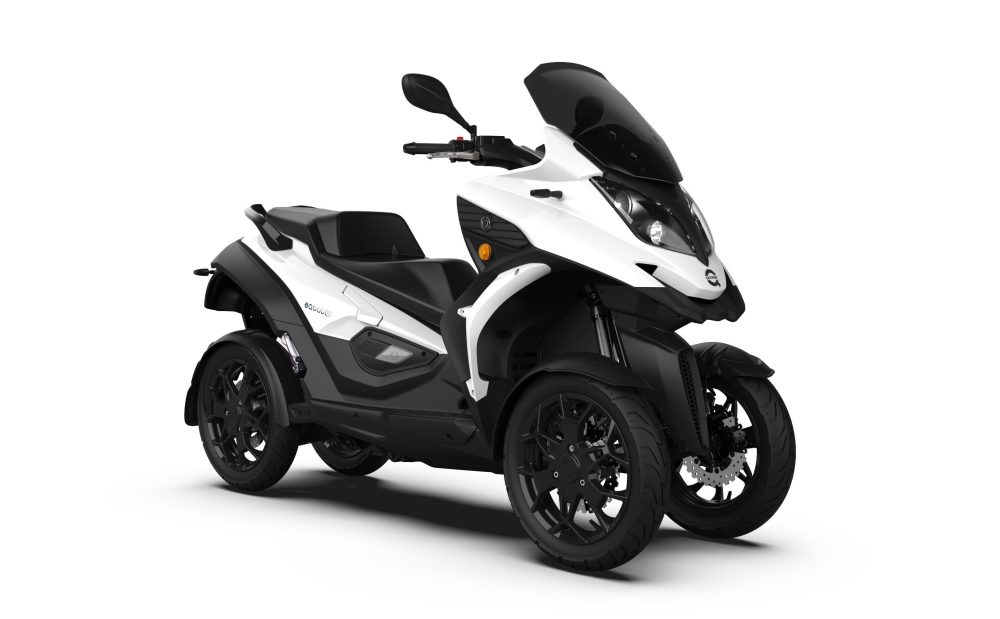 The eQooder also includes a reverse gear, which can be helpful for maneuvering the four-wheeled scooter.

The eQooder’s unique design requires the Zero ZForce motor to be coupled to a mechanical differential like a typical four-wheeled car. That provides the eQooder with smooth rear wheel drive. The system is also equipped with dual rear traction control to ensure proper grip and optimal safety.

Unlike a four-wheeled car though, the eQooder leans into turns and handles nimbly like a scooter or motorbike. 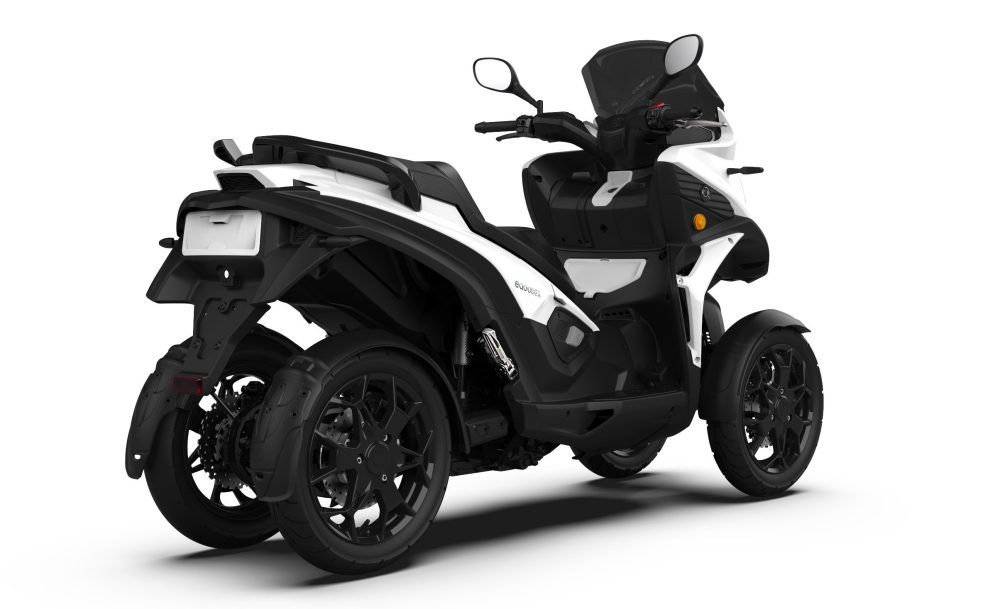 The eQooder will be launched in December 2019 in the European market. Eager buyers can already place a €5,000 deposit on the vehicle via the Quadro website. The full price of the vehicle has not yet been revealed.

Interestingly, Quadro is offering reservation holders a long-term rental of a standard gas-powered Qooder while they wait for the eQooder to begin deliveries. That rental will cost €190 per month.

The eQooder joins a short list of other electric maxi-style scooters such as the BMW C-Evolution. This may very well be the only electric maxi scooter with four wheels though. So for riders who prefer to keep their feet off the ground and desire two wheels for every foot, the eQooder could be the ride for you.