Tesla has released a first glimpse of Supercharger V3 in an invite to a select few owners ahead of the launch of the new fast-charging station in Fremont, California later today and it has a noticeable difference.

He’d been talking about the new generation of Tesla’s fast-charging station for over two years and we’re finally going to see it for the first time tonight.

However, it sounds like only a select few owners are going to be able to experience the new charging station at the launch event tonight.

Tesla has been inviting Model 3 owners who are part of the Early Access Program to experience Supercharger V3 in Fremont tonight.

In the invite, they released a glimpsed of the Supercharger V3 – pictured above . – and they wrote:

“As an Early Access Program member, you’re invited to experience the next generation of long-distance travel by V3 Supercharging your Model 3.”

The teaser image looks very similar to the current generation of Supercharger stations, if not identical, but the charge cable actually looks much thinner, which would be surprising considering the new generation is supposed to enable a higher charge rate.

But Tesla temporarily had a thinner Supercharger cable at its Computer History Museum location that was liquid cooled (pictured above with heat map). That was replaced last year by the thicker traditional cable. But we noted at the time from a source familiar with the matter,

Tesla isn’t abandoning this technology at all. We’re told that liquid cooled cables are a “key” technology for Tesla and the company continues to evaluate the technology for upcoming Supercharger and possibly other applications.

Here’s the invite in full (via Privater on Twitter): 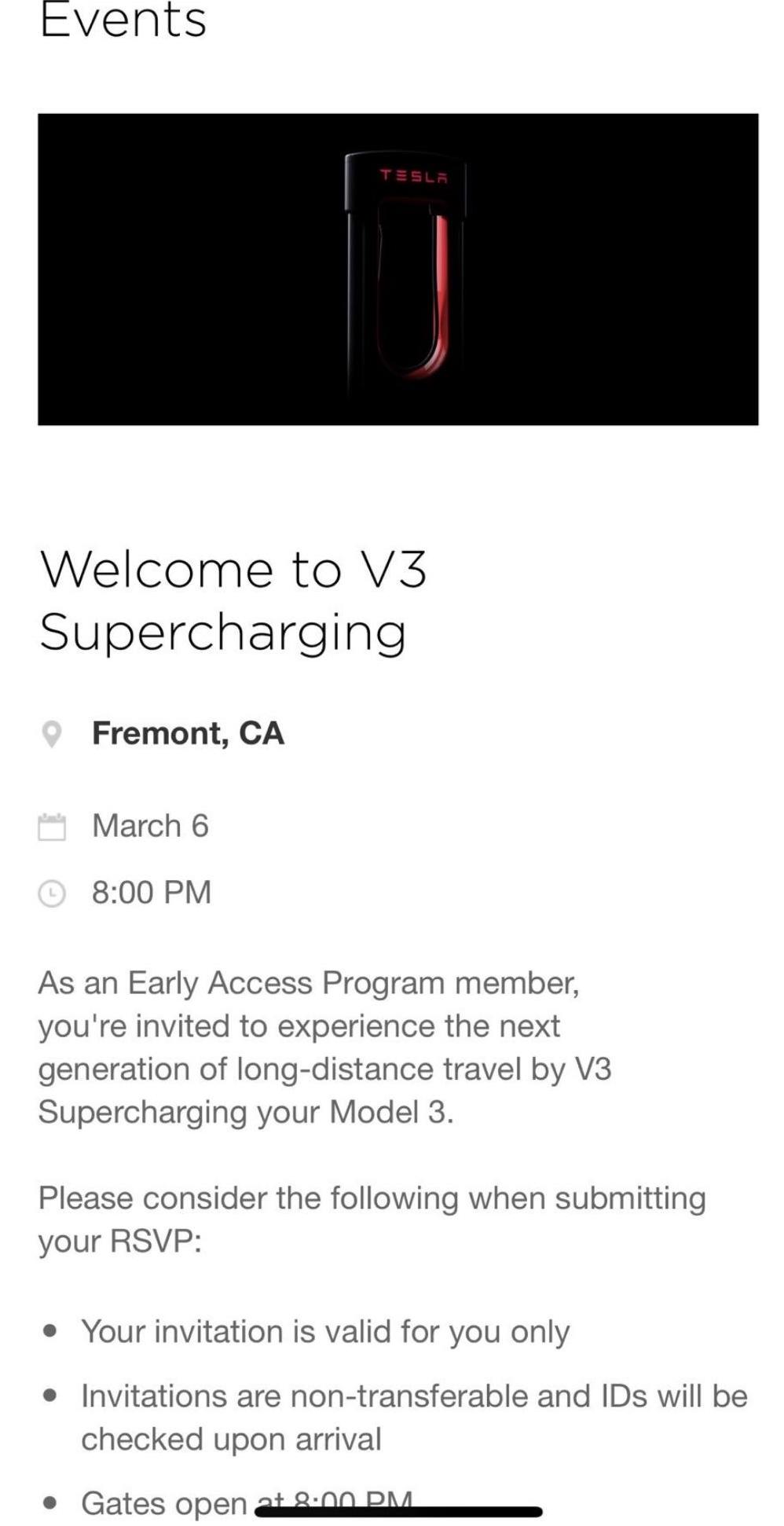 A few interesting things here. Tesla is bringing back the mention of “long-distance travel” when talking about Supercharger V3 – leading me to believe that the new version will only be for stations between cities to enable longer routes.

It was the original intention of the Supercharger network, but Tesla ended up moving away from it to include city charging on the network.

In fact, in 2013 Tesla CTO JB Straubel wondered,  “By the time the low-cost Tesla is released, Supercharging might only take 5-10 minutes for a full ‘tank’.

Also, here they invited a Model 3 owner in the EAP program. We know that the Model 3 is able to take a higher charge rate than the current limitations of the Supercharger V2.

It’s an assumption at this point, but I wouldn’t be surprised if the higher charge rate of V3 is only compatible with Model 3 at launch — or at least only retroactive for existing Model 3 vehicles at launch.

Tesla has yet to confirm a hardware upgrade in Model S and Model X to support a higher charge rate, but we have to assume it’s coming.

There have some interesting rumors about the specs of the Supercharger V3 (via NetBrown on Reddit). You can see a full list below.

He says that the cable will actually be thinner, which is in line with the image that Tesla released, and therefore, it gives weight to his other specs, which includes a 200 kW charge rate.

Here are the rumored specs:

We should know if any of this is true later tonight. If you happen to go to the event or know anything about the Supercharger V3, you can reach out at fred@9to5mac.com.