Tesla Corsa, a new Tesla-only race track experience where owners get to safely explore the limits and performance of their vehicles, is starting to emerge in the Tesla owner community.

We went to their latest event in California last weekend to see what it was like. Here’s our report:

The event took place at the Buttonwillow Raceway in Central Valley between Los Angeles and the Bay Area.

It was put together by Unplugged Performance, a popular California-based Tesla vehicle tuner.

In an interview during the event on Sunday, Ben Schaffer, CEO of Unplugged Performance, described the idea behind Tesla Corsa:

“Tesla Corsa is basically an opportunity for Tesla owners who daily drive their cars to go on the race track and experience the full dynamic of their cars in a safe environment.”

They held their first event last year, but it was mainly an experiment to see how it could work out and get feedback.

15 Tesla owners ended up signing up to drive their car on the race track.

Now only a few months later, they held their second event and this time, 50 Tesla owners showed up – resulting in a pretty unique and spectacular scene:

Interestingly, all Tesla owners were welcomed and yet almost only Model 3 owners, especially people with the Model 3 Performance ended up participating in the event.

It’s clear that Tesla’s new track Mode, which is only available on the Model 3 Performance, has something to do with that.

A lot of owners were having fun testing the new mode which enables some specific powertrain settings for the track.

Track Mode includes a new race-oriented cooling system that enables drivers to do many runs and get used to the track without going into a low-power mode to cool the powertrain.

It can do a lot more and it is fairly impressive. You can read our previous report on Tesla’s Track Mode for all the details.

Owners who were using it were able to improve their time significantly at the Buttonwillow Raceway.

Kevin Becker, a SpaceX engineer who regularly races his Model 3 Performance at Buttonwillow, said that he saw his lap time drop by about 6 seconds when Track Mode was introduced through an over-the-air update.

At Tesla Corsa last weekend, Becker ended up getting the fastest time on street tires: 2:04.8.

You can see some footage from his car on the track in our short video about the Tesla Corsa event:

That said, Becker’s Model 3 is not completely stock. It features several upgrades from Unplugged Performance, including new coilovers and performance brake pads.

It is also equipped with the company’s newly designed front lip, which they claim improves aerodynamic performance:

You can check out his Youtube channel for videos of his Model 3 at the Buttonwillow track.

Cameron Rodgers, a Model 3 owner who has been breaking a bunch of electric race track records, also showed up and he unsurprisingly got the best time of the day.

Thought to be fair, his Model 3 performance was on slick tires and it features some more “extreme” modifications including a custom rear spoiler and a very deep lip on the front end. 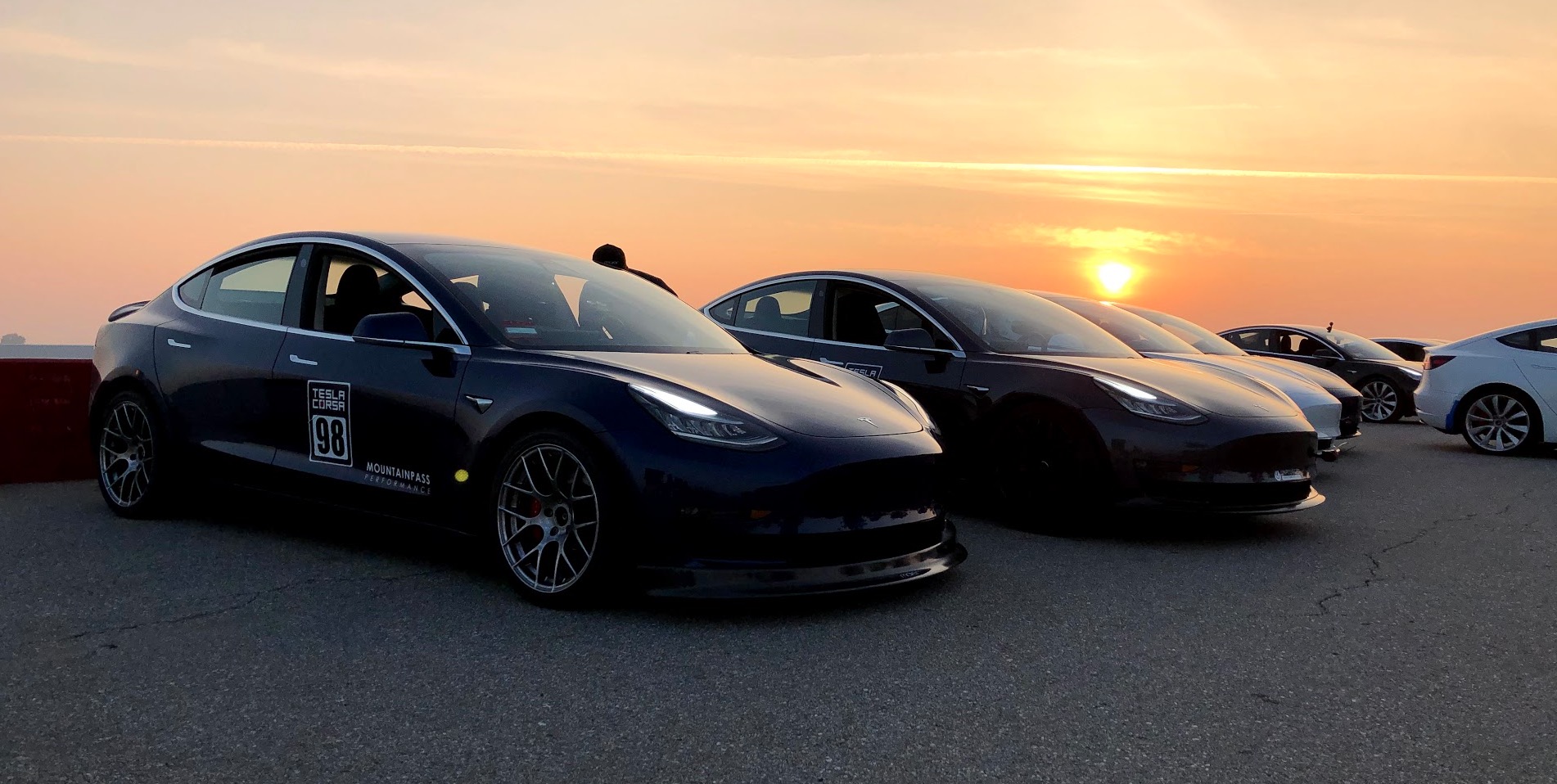 With those modifications and his driving skills, it looks like he established a new electric lap time record at the Buttonwillow Raceway: 1:58.8.

Other notable times include Evan Eugene Brannigan who manage a 2:05.4 lap in a completely stock Model 3 Performance on Track Mode.

Tan Suphavarodom did a 2:11.2 lap – the fastest without using Track Mode.

As for non-Performance vehicles, Morgan Higham managed a 2:14.3 lap in a rear-wheel-drive Model 3.

Those guys were really pushing their vehicles hard, but the event was also for Tesla owners who had never brought a car to the track before and they were able to explore the limits of their new vehicle for the first time.

Some of them got a little more than they could handle and lost control, but it was at least done in a controlled environment and nobody got hurt.

The biggest accident of the day was actually from an experienced driver who pushed it a little too far and ended up sliding into the wall in his Model 3. It resulted in some mostly cosmetic body damage:

Overall, it looks like the event was a success and they are looking to expand this type of track experience to other regions.

You can check out their website for more details.

I was really impressed with this event and the timing of it couldn’t be better.

With the release of the Model 3 Performance and Track Mode, I think Tesla now really has a fun car to take to the track and I think it could help expand the community to the race track.

At Electrek, we think every aspect of motoring, including motorsports, are going electric and I think we are seeing some important steps toward that here.

The Central Valley was a particularly interesting backdrop for this event. It was my first time there and I was shocked when we came down from the mountains to see the thick layer of smog over the valley. You are supposed to clearly see the mountain range in this picture: 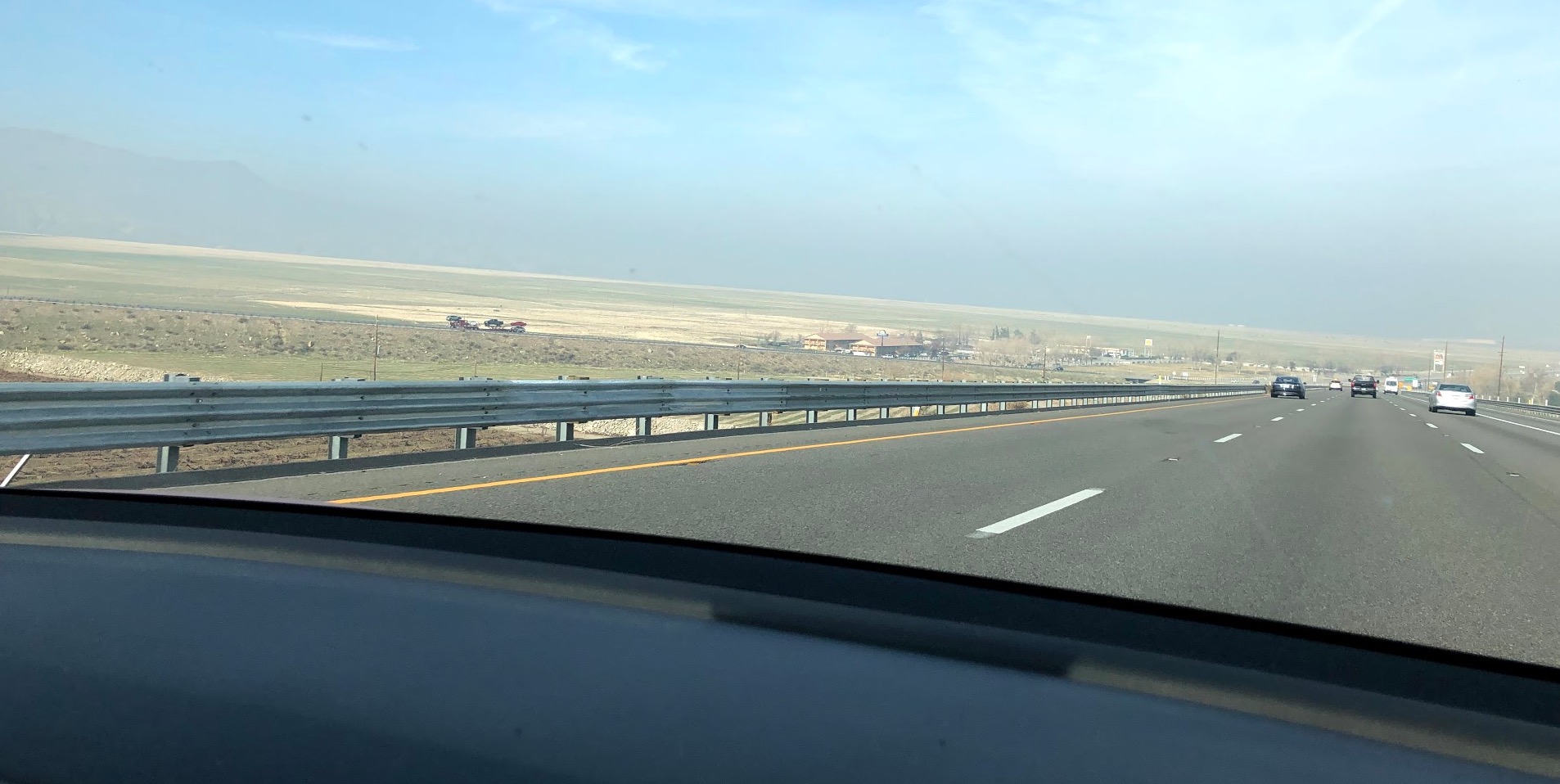 I couldn’t help but imagine that it wouldn’t be as bad if all the cars on the road and on the track were electric.

On top of it, it’s just a fun way for owners who wouldn’t normally bring their vehicles to the track to get a better feel of what their car is capable of doing.

I think Tesla should be all over this. It would be a great way to get feedback in their vehicles from more “hardcore” owners.

While the company was not officially involved with the event, they did send a marketing team to film it:

So who knows? We might see Tesla help sponsor those kinds of events in the future?

Do you want to see these track day experiences making it to other regions? Let us know in the comment section below.