Here’s a crazy Tesla story for you this Sunday: we just learned about the case of a Tesla vehicle fire in which the owner claimed his brand new Model S caught on fire on its own while he was driving it back home after taking delivery, but Tesla says that someone fired a bullet into the battery pack from the passenger cabin.

It happened back on December 31, 2014, but we are just learning about it after a lawsuit he filed against Tesla came to light (hat tip to Tim).

John Schneider from Pennsylvania took delivery of his Model S on the last day of 2014.

In the lawsuit filed with the court of common pleas in Pennsylvania, Schneider describes what happened to his car as he was driving it back:

“As Schneider drove the Vehicle in the Pittsburgh, Pennsylvania area, smoke, and flames began to emit from the rear seat of the vehicle in the vicinity of the VEhicle’s rear battery cells. Schneider immediately stopped and exited the Vehicle and watched as the rear passenger seat continued to burn.”

He added that “flames were visible from outside” the Model S and the fire resulted in a total loss of the vehicle.

At the time, a few Tesla vehicles caught on fire in some very publicized cases and what happened next was pretty interesting.

It looks like Tesla was on high alert for any potential fire since Tesla’s regional manager reached out to Schneider the same day after his Model S was “throwing some faults with the battery”.

According to the lawsuit, Tesla sent engineers to take possession of the car the same day and start their investigation.

Within 5 days of the incident, Tesla quickly offered a deal to Schneider to keep quiet about his Model S catching on fire and in return, they offered to take care of his loan and quickly get him a new car with a free extended warranty.

Here’s the agreement that Schneider signed at Tesla’s request:

Tesla gave Schneider a loaner while they were preparing his new vehicle, but that’s when things got crazy.

A few weeks later, the automaker completed its investigation into the cause of the fire and it claims that the battery pack caught on fire because someone fired a bullet into it:

“Tesla has determined that the cause of the thermal event that occurred in the Vehicle’s battery was a bullet fired into the battery from inside the Vehicle’s passenger cabin.”

On January 21, 2015, Tesla sent an official letter rescinding the original deal because of the new finding: 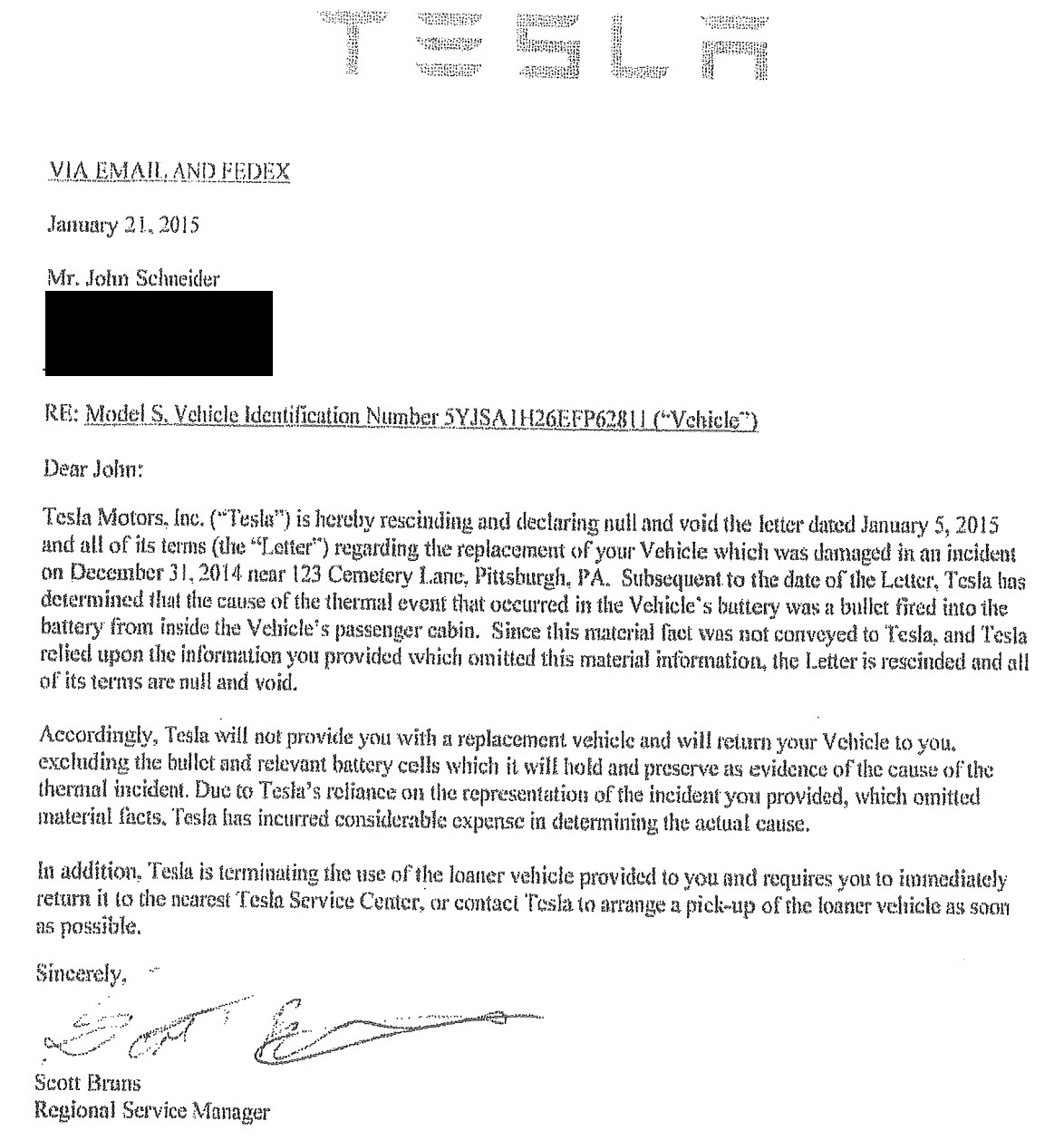 Schneider said that he didn’t agree with Tesla rescinding the deal and that the company’s actions resulted in losses for him due to his loan on the vehicle that wasn’t in his possession anymore.

The case was eventually settled out of court without any detail on the settlement.

That’s one weird story. I can’t imagine a situation in which someone would fire a gun toward the battery pack inside the passenger cabin of a car right after taking delivery.

But Tesla says that it has found the actual bullet and the owner did say that the fire started from the battery pack at the level of the back seat.

It’s a good one to keep in mind when we hear about other Tesla fires without any apparent accident.

That said, there’s a worry about batteries having thermal runaway events without any accident, which is why Tesla does those kinds of investigations when a vehicle catches on fire without an apparent impact.