In a new first for electric flight, researchers at MIT have succeeded in achieving heavier-than-air powered flight using an engine with no moving parts.

At a time when new electric planes are setting records right and left, a novel type of electric aircraft has achieved an industry first.

In order to maintain powered flight without any moving parts, the experimental aircraft uses an ion drive engine.

Ion drive engines operate under the principles of electroaerodynamics. Essentially, they use electricity to accelerate charged particles instead of using a propeller or jet engine to accelerate air. This is sometimes referred to as ionic wind.

This type of solid-state engine has actually been used in space travel for some time. However, it was long thought to be incapable of flight on Earth due to its inability to overcome the force of gravity. Or at least until now.

Researchers at MIT have just published an article in the journal Nature detailing their work to successfully achieve solid-state flight.

According to lead researcher Steven Barrett, the inspiration for the research came from his childhood interest in science fiction:

“I was a big fan of Star Trek, and at that point I thought that the future looked like it should be planes that fly silently, with no moving parts – and maybe have a blue glow. But certainly no propellers or turbines or anything like that. So I started looking into what physics might make flight with no moving parts possible, and came across a concept known as the ionic wind, with was first investigated in the 1920s.”

How does ion drive flight work?

The ion drive engine used in MIT’s experimental aircraft contained an array of high voltage electrodes operating at around 40,000 volts. Even with a small amount of current, approximately 15 mA, that still provided around 600 watts of power.

The array of high voltage wires carries a positive charge over many negatively charged airfoils. This charge differential ionizes nitrogen particles in the air, causing them to shoot backwards out of the engine and over the airfoils.

As the nitrogen ions travel backwards out of the engine, they collide with air molecules, forcing them backwards as well. That generates thrust, pushing the aircraft forward. With enough tiny high voltage wires and enough surfaces, the thrust can become sufficient to power an aircraft.

Of course in order to maximize the small amount of thrust, the aircraft must be optimized as well. MIT’s experimental aircraft had a wingspan of over 5 meters (16 ft), yet weighed less than 2.5 kg (5.5 lb), including the battery. 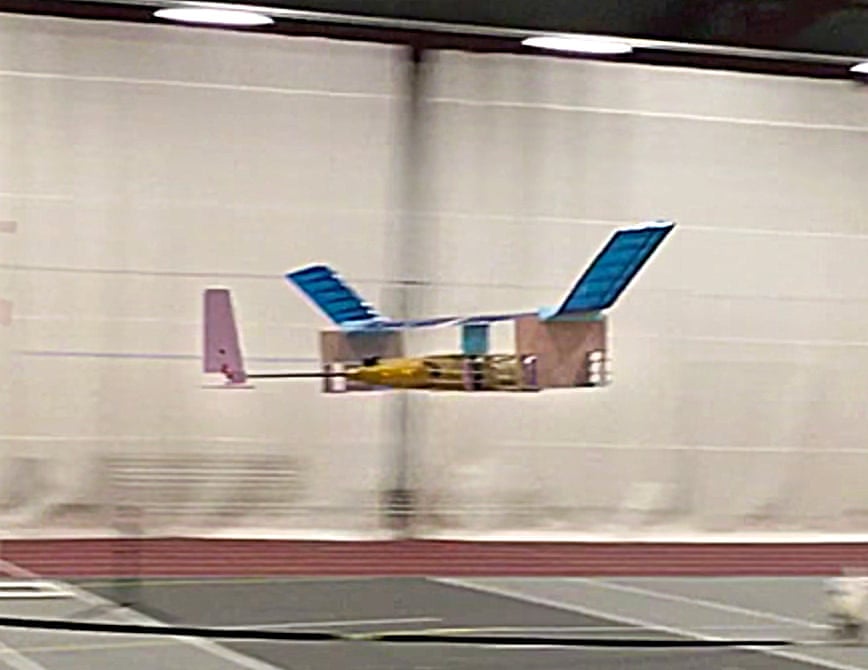 The first flights traveled only as far as 60 meters (197 ft), though the researchers are quick to point out that this is similar to the distances achieved by the Wright brothers in their first experimental flights at Kitty Hawk.

After demonstrating that ion drive flight is possible, now the team will work to expand its capabilities by further optimizing the engine and the aircraft to achieve longer flight times under wider operating conditions.

Why use ion drive engines?

Ion drive flight has a number of important advantages that could help electric flight compete with fossil fuel powered flight.

Unlike traditional combustion engines, solid-state ion drives have no moving parts and are thus nearly maintenance-free. This would allow the engines to work for months or even years at a time.

While the current uses are still limited due to the early stage development of the technology, the applications are vast. With electric airliners almost a reality, the possibility for this type of technology is promising.