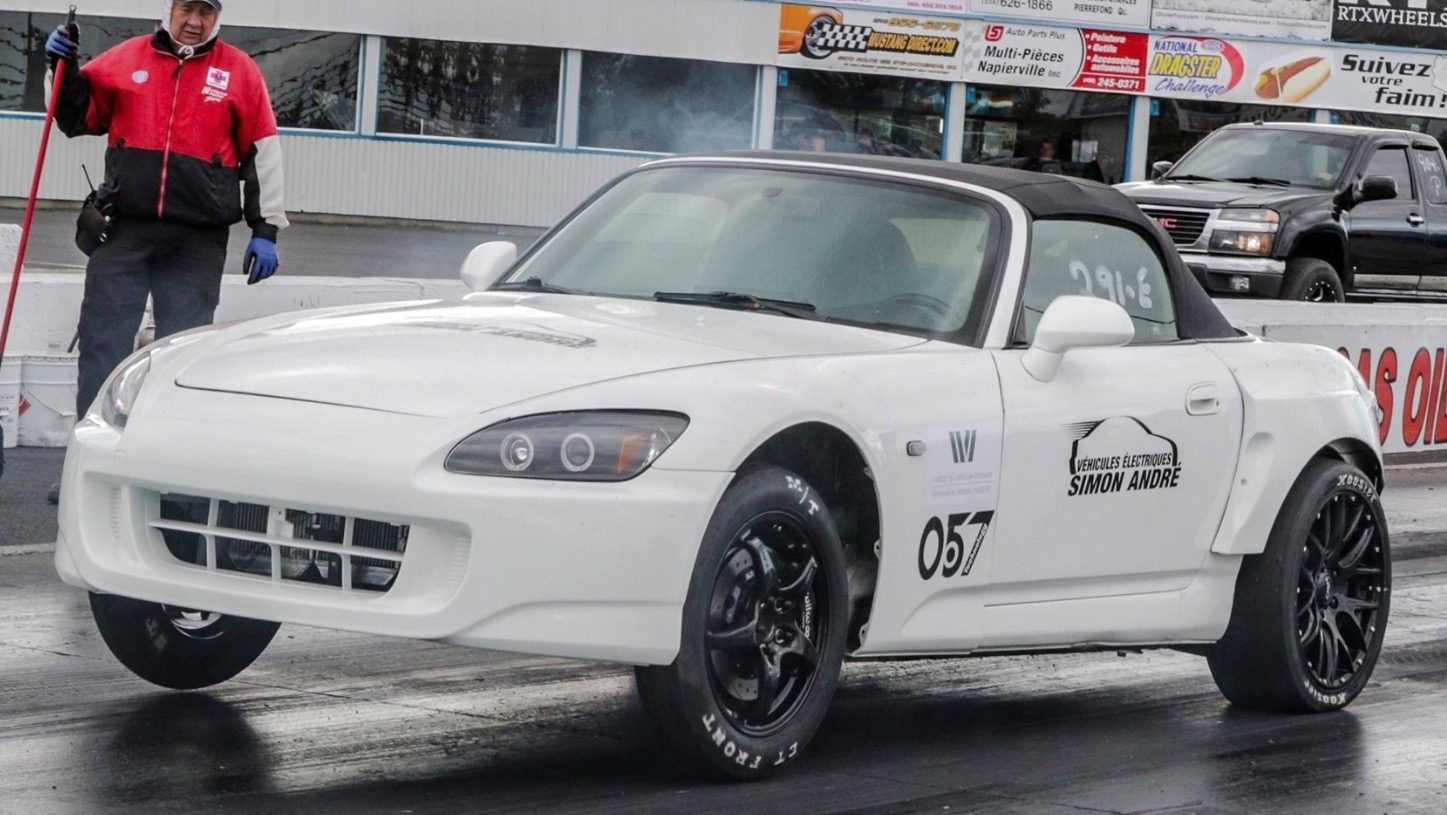 As I stated in my ‘Taking a Tesla Model 3 Performance to the dragstrip‘ post yesterday, there was only one other electric vehicle at the track this weekend and it was a special one: A Tesla-powered Honda S2000 that ran the quarter-mile in 10 seconds.

The vehicle, nicknamed Model S2000, is the result of a collaboration of three cool companies involved in the electrification of transport:

The result is one of the coolest EV conversion projects that we have seen to date.

They built a Frankenstein of sorts: an electric vehicle with parts from several different popular EVs that was made to fit in a Honda S2000, which turns out to be a great car to convert to electric propulsion.

057 Technology designed the controller for the motor, which is powered by 2 Chevy Volt battery packs.

The reason behind using the Chevy Volt batteries is because of their higher discharge rate than Tesla battery modules.

It’s better suited to the purpose of this conversion.

They split the battery modules between under the hood and in the trunk of the vehicle. It’s still a work in progress and Guillaume André from the Simon André electric dealership urged me to ignore the current cable management or lack thereof.

Along with the Tesla drive unit, they also used Tesla’s subframe and the performance brakes:

The hardware work is quite impressive in the car, but there was also a lot of impressive work to make it all come together in software.

They can monitor the temperature and voltage of each battery module and cell, along with several other variables.

Once the team arrived at the track last weekend, they initiated the battery pack’s temperature management to warm the battery modules a little before hitting the dragstrip since it was somewhat cold outside.

After that, they gave me a quick smackdown against my Model 3 Performance, which had no business being on the track next to this electric beast.

They achieved their best time yet with a 0 to 60 mph acceleration in 2.39 seconds and a quarter-mile in 10.24 seconds.

I had the chance to jump in the passenger seat to experience that acceleration for a quick run and I felt the g-force lifting my butt off my seat for a fraction of a second.

Here’s a quick video of the making of the vehicle as well as some footage from our day at the track:

What’s next? With the Quebec winter coming, they are pretty much done for this season, but they plan to keep working on the car and come back next year with a sub 10-second time.

Since it should end up with a somewhat decent range, they also intend to clean up the look of the car and use it for regular driving.

We will revisit the Model S2000 next year and hopefully witness some improvements both on the track and as an overall electric vehicle.

Of course, they are also learning a ton from the project and getting valuable experience for potential future EV conversions.

Special thanks to Guillaume André and Sylvain Bélanger from Véhicules Électriques Simon André and Hugo Normand and Frédérick Prigge from the Institut du véhicule innovant (IVI).