Dirt bike riding can be a fun hobby, what with the whole flying-through-the-air-on-two-wheels thing. But with gas-powered dirt bikes belching smoke, blaring noise and seemingly in constant need of maintenance to keep them running, it hasn’t always been the most kid-friendly sport.

However, one company is changing that by introducing electric dirt bikes specifically designed for riders aged 3-18.

Oset specializes in small electric dirt bikes that are easier for children to learn to ride. With adjustable brake levers, smaller components and power levels that can be dialed in to grow with the child, the Oset bikes help kids develop dirt riding skills early in a more manageable way.

Very few neighbors would be approving of a kid riding his loud 2-stroke dirt bike around the backyard, but Oset provides a solution that makes dirt bike riding more accessible to kids.

“OSETs are recognized globally as the best bikes for children to learn and improve their skills and being fully electric they are silent, meaning riders can use them everyday in their backyard without causing any noise disruption” 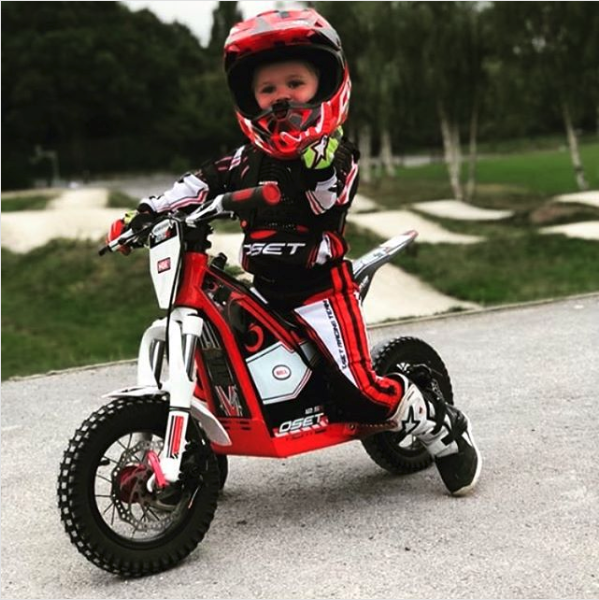 The company’s range of electric dirt bikes starts with the cute little Oset 12.5 Eco 24V designed for 2 to 5 year olds.

It is designed to be a simple, sturdy and adjustable electric dirt bike for introducing kids to the sport. With a 24V battery and 600W motor, it has decent power to climb jumps and sling dirt, but is still manageable for children.

“Safety features are paramount. An on/off handlebar switch is easily operated by the rider, while the separate key switch is easily removable by the parent when it’s time to take a break. The OSET controller has been designed for our exclusive ‘2 dial’ system, which allows parents to easily adjust the characteristics of the bike. By simply removing the rubber bung in the ‘tank’ area, the responsible adult can adjust the speed and response of the bike. It can be set from a very mellow machine at walking pace and low power, all the way up to maximum power for more experienced riders. For those learning to ride, the throttle response can be set so the reaction of the bike to throttle openings is softened.”

Check out this little thing in action (and ignore the annoying “braaap braaap braaaaap” from the gas-powered dirt bikes in the background).

For slightly older kids from ages 5-7, the 16″ version includes upgrades such as hydraulic disc brakes, a ‘3-dial’ selector system, a 36V battery and a more powerful 800 W motor for around $2,199. 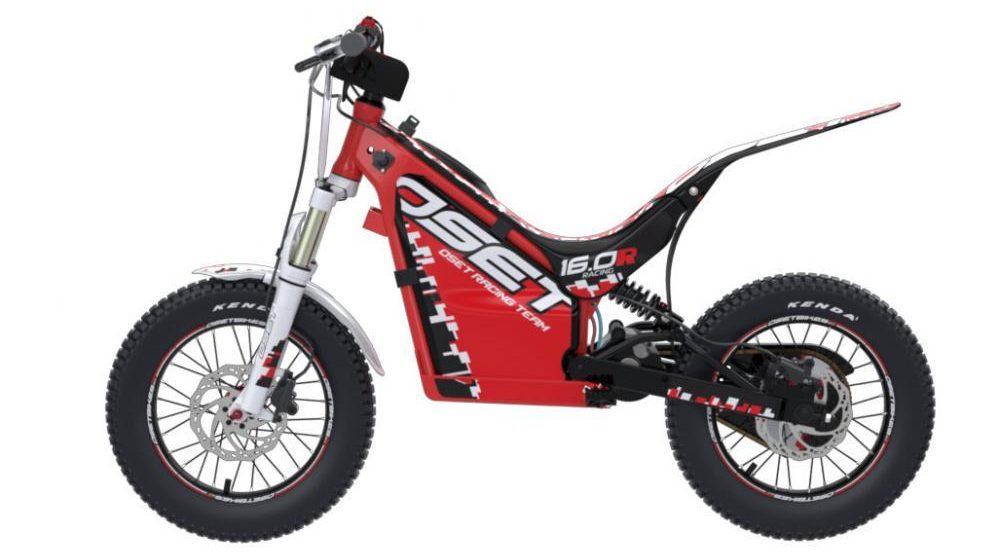 The 20″ version for 8-12 years olds is where things start to get fairly serious. With an upgrade to a 48V battery and 1,200W motor, the Oset 20.0 Racing model is designed for competition. Gone are the chain guard and chin protector. They’ve been replaced by features such as lightweight aluminum swingarms and alloy sprocket carriers as well as an oil dampened rear shock.

The Oset 20.0 Racing has dominated gas-powered bikes in national competitions for the last few years, demonstrating that electric drive can be just as good as, or even better than, gas-powered dirt bikes. Though that performance does come at a cost, which is precisely $2,999 in the case of this dirt bike. 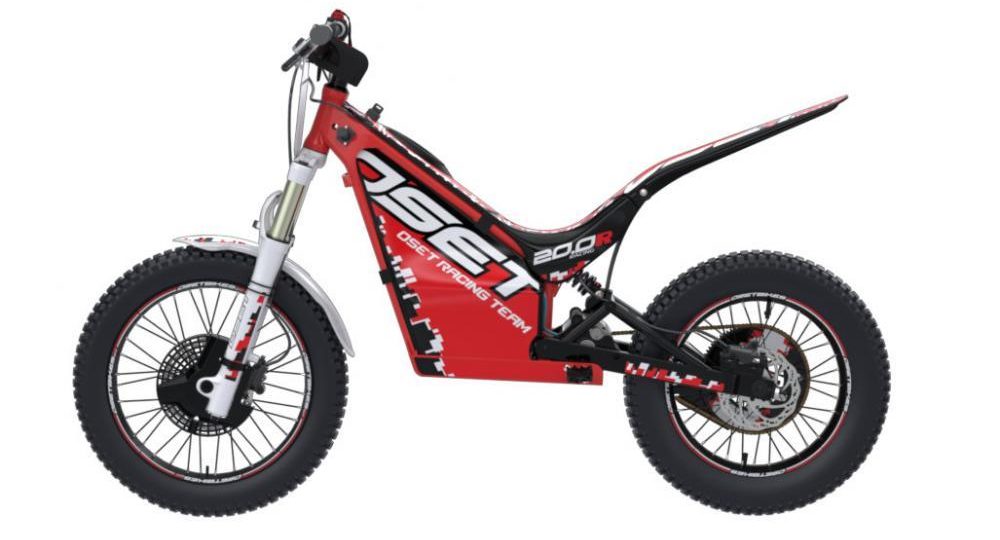 By the time you reach the 24″ version, you’re looking at something that adults can realistically ride. The old lead acid batteries of the previous version are scrapped in favor of lithium-ion batteries, and the motor is upgraded to 1,400W.

“The OSET 24.0R features high end components, from the 20ah high output OSET lithium battery, to the adjustable full-length RST forks, DNM rear shock and Avid hydraulic brakes with a 180mm discs front and rear. Motorcycle rims are strong and light to take some serious riding. The motor is a new 1400w OSET unit with hardened sprockets and strong chain. The OSET controller is a high-power unit and features the familiar 3-dial adjustability, so the power, speed and response are fully adjustable to suit the rider. The new OSET magnetic lanyard adds a level of safety and is competition legal.”

This model will cost you though, with a lofty retail price of $4,299. 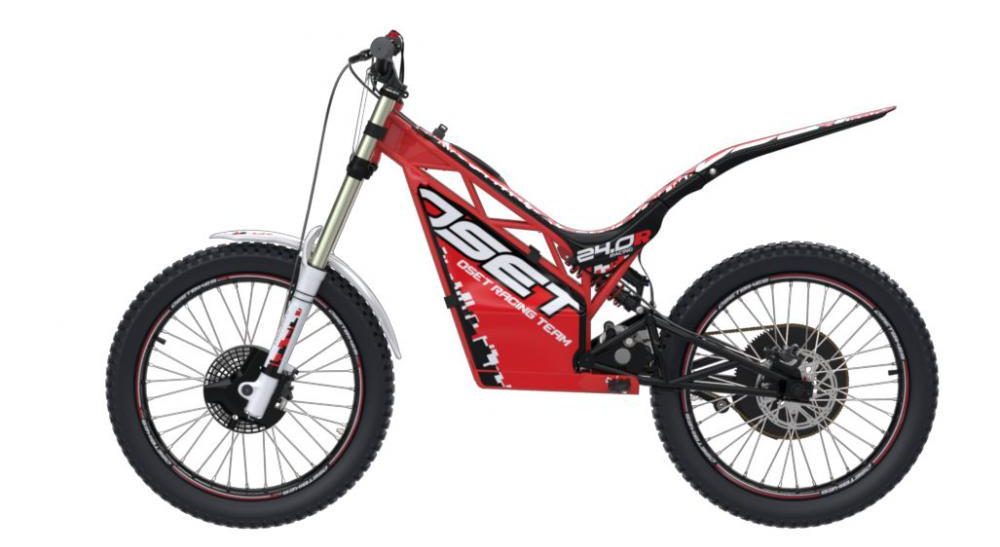 Obviously these vehicles require kids to be responsible, and should only be used with adult supervision until kids learn how to ride them safely and reach an appropriate age. But if you want your kids to learn riding skills safely and effectively, then starting from a young age with appropriate-level electric bikes seems like a great way to do it.

I’d love to see the smaller models swap out the heavy lead acid batteries for Li-ion packs, but I understand that they have to keep the cost down, and weight isn’t the highest concern for non-competitive models.

All in all, these little bikes look awesome, if not a bit expensive. Especially since Razor sells a 500W kid’s dirt bike for just $449. I imagine it isn’t as well-engineered as these, though it still might make a good alternative for those on a budget. I don’t have kids, but I’d love to see my nephews on a mini electric dirt bike!