Now a manufacturer is trying to push the boundaries of charge rates by unveiling a new station with a record capacity of ‘up to 475 kW’.

Tritium, an Australian company who is currently supplying some of the 350 kW ‘ultra-fast’ charging stations used in the Ionity charging network being deployed in Europe, unveiled the new technology in Amsterdam last week.

They described it as a “unique HPC system, a scalable, flexible system for commercial operators, capable of charging an electric vehicle up to 475 kW.”

The company released the following image of the “high-power station”: 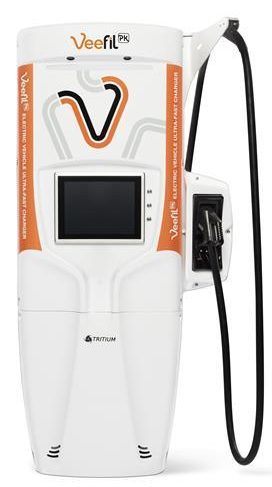 Jeroen Jonker, General Manager of European Sales at Tritium, said in the announcement:

“Tritium’s strategy is to be at the forefront of development in this fast-growing sector – first to market where there are new opportunities,”

At the forefront indeed, Tritium’s 350 kW stations currently being deployed in the Ionity charging network have a higher charge rate than any passenger electric vehicle can currently take.

They are considered “future-proof” and the first passenger electric car that can take full advantage of them is expected to be the Porsche Taycan late next year. The vehicle could charge up to 80% in 15 minutes on those stations.

A similar situation is likely to happen with the deployment of those new stations – though larger commercial electric vehicles are likely to take advantage of those charge rates before passenger electric cars.

Jonker said that they are particularly looking at the UK for future deployment:

“With the announcement of the Road to Zero strategy, the UK is becoming increasingly important as one of our major markets, and we are in active discussion with several organisations in the automotive, utilities and fleet sectors about the deployments of both rapid chargers and high power chargers.”

The company recently opened new offices in the US and Europe in order to support the demand in those markets.