These days it seems like there is a never-ending supply of new electric bicycles being announced weekly. From inexpensive e-bikes with just 7.5 mi (12 km) of range to specialty e-bikes with 400 mi (643 km) of range.

But consumers have always had to take these range estimates with a grain of salt due to the various and sometimes unscrupulous methods that some retailers take to eek out more impressive results. Until now that is, as a new standard for measuring the range of electric bicycles has finally been developed.

The German vehicle association ZIV (Zweirad-Industrie-Verband) has just announced that they have developed a standard meant to measure the range of electric bicycles in such a way that all e-bikes can be compared on a level playing field.

Known as the standardized range test R200, the new standard is intended to aid not just manufacturers to quote more realistic range estimates but also to help electric bicycle shops assist customers with better comparisons between different brands and models of e-bikes.

Most importantly, the new standard is designed to achieve reproducible results, something that is unfortunately uncommon when it comes to range estimations in the electric bicycle industry.

Many manufacturers, especially those of lower cost and pedal assist bicycles, use test methods that include professional cyclists, manicured bicycle paths or other advantages to achieve the best possible range on a single e-bike battery charge. That impressive range is then listed as the max range of the e-bike, often with a small caveat included warning customers that e-bike ranges vary based on factors such as terrain, weather and the individual rider.

The ZIV’s new standard is outlined in this report, though you’ll need fairly good German to understand it.

Essentially, the new testing procedure uses a qualified test rig to normalize all e-bikes to a uniform assist factor of 200%. This means that the test simulates the electric bicycle providing twice the amount of assist that the rider provides himself. So if the rider is providing 100 W of power, a typical amount for a casual cyclist, the e-bike would provide 200 W of assistance for a total combined human/e-bike hybrid output of 300 W. 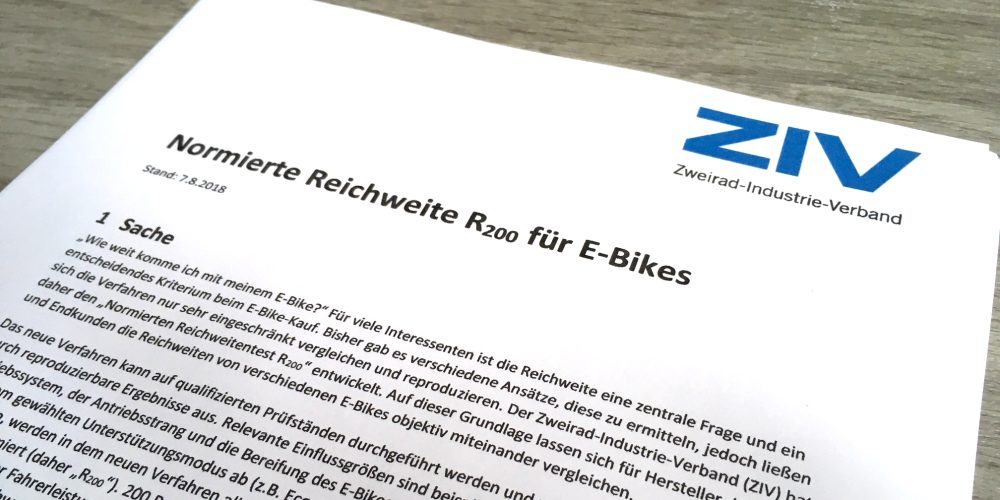 Factors that are considered by the testing standard include everything from the road surface and weather conditions to the weight of the bicycle and the type of tires used.

Unrealistic electric bicycle ranges has been one of my biggest EV related pet peeves for a long time. It has always frustrated me to no end when I see companies that take advantage of consumers’ ignorance with unrealistic claims that no one will ever achieve in real world conditions.

So I think that a standard like this has been overdue.

Sure, it doesn’t mean that every e-bike manufacturer is going to use the new standard or that adoption will even happen quickly, but hopefully the big players will hop on board in an effort to demonstrate credibility with consumers. That could help motivate other smaller manufacturers to begin using the standard. Eventually, not using an industry standard to rate range could be seen as a sure sign that something suspicious is going on and cause consumers to walk.

My biggest question that remains is how well this standard can compare pedal assist e-bikes and e-bikes that operate with a hand throttle only.

From what I understand of the standard (which is admittedly reading them with the help of an online translator), the test should be able to apply to throttle e-bikes as well by applying 70 W of pedal power and engaging the throttle to a point that would apply 140 W of motor power. However, I can understand German just about as well as I can breath underwater, so if any German language speakers want to help me verify that, I’d appreciate it!