That’s actually exactly as designed by Tesla and CEO Elon Musk. The ranking is mostly based on the capacity of the dealerships to turn potential customers into buyers, but salespeople in Tesla’s stores are not being very sales-oriented as they focus on education.

Pied Piper, a real consultant and market research firm (not based on the HBO series Silicon Valley), has a yearly study that sends “mystery shoppers” to dealerships across the US in several different locations per brand to measure “how well dealerships follow sales processes, such as asking qualifying questions and ultimately asking for the sale”.

Tesla doesn’t use the usual third-party franchise dealership models and instead, it sells its vehicles through the sometimes controversial direct-sale model where they own and operate all their own stores.

The main issue with Tesla using the franchise model is that dealerships are de-incentivized to sell electric vehicles. Most of the cars on their lots are gas-powered and they make most of their profit on servicing the vehicles they sell.

In a 2012 blog post, Tesla’s CEO explained the company’s approach to distributing and servicing cars. He described the goal of Product Specialists, Tesla’s equivalent of salespeople:

“They are not on commission and they will never pressure you to buy a car. Their goal and the sole metric of their success is to have you enjoy the experience of visiting so much that you look forward to returning again.”

Musk was pleased with the results:

Tesla finishes last in being salesy! Good. Also, I can't believe there is a real Pied Piper.https://t.co/9Zzijxxyy4

In the latest edition of Pied Piper’s dealership mystery shopper ranking, Tesla finishes dead last again. For the study, they claim to have “measured treatment of car-shoppers who visited 3,466 dealerships throughout the country.”

Tesla didn’t even come close to the average based on their benchmark: 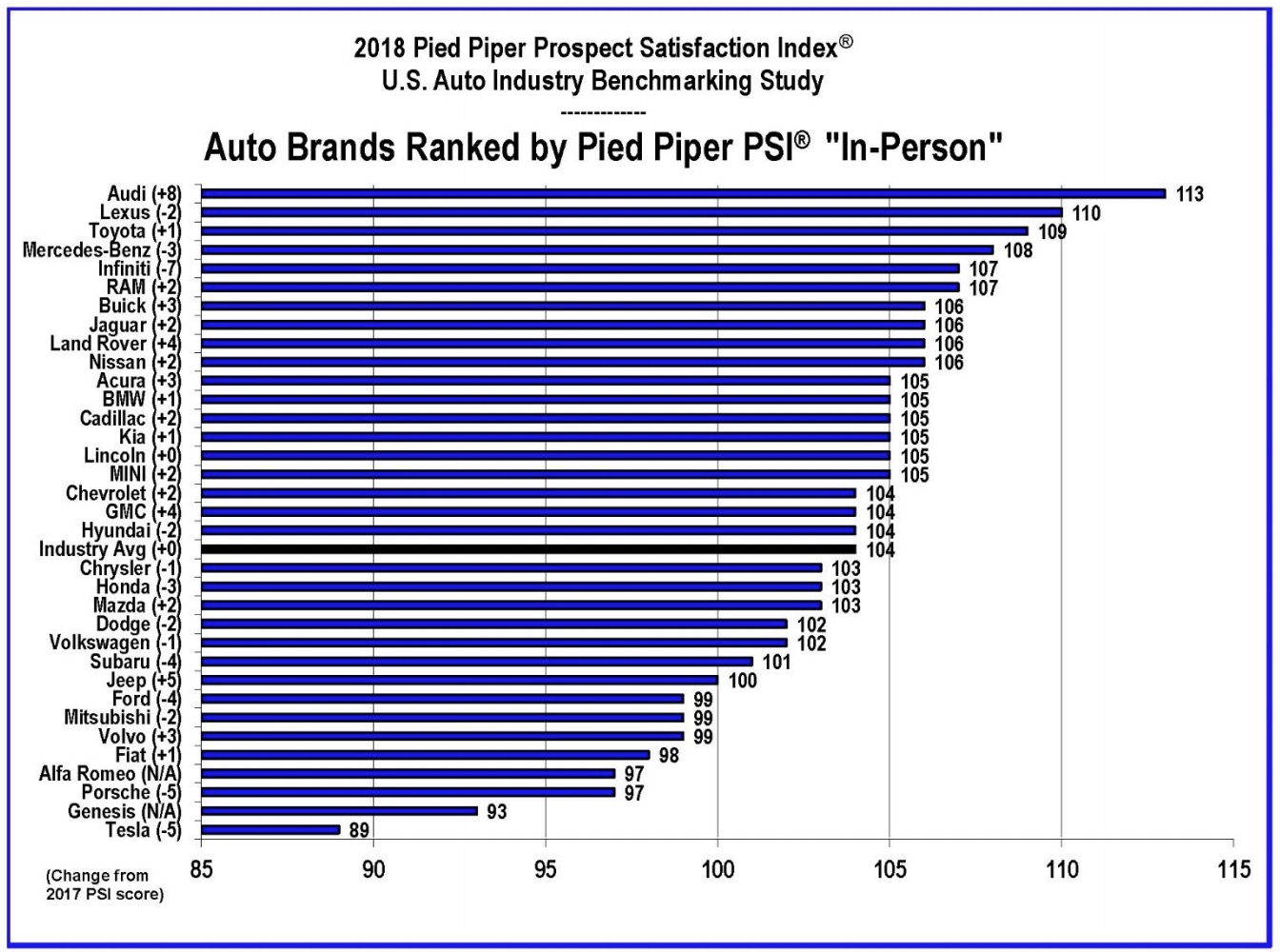 Tesla’s stores are still far from perfect and of course, some are better than others out of Tesla’s more than 100 retail locations, but from my own experience at franchise dealerships and Tesla stores, there’s just no way that those rankings are representative based on how good is the customer experience.

It just shows that the ranking process is based on the old dealership model and doesn’t apply to Tesla’s retail experience very well.

The bulk of the score is based on their ability to close sales, which Tesla doesn’t focus on as much as other automakers. Though to be fair, they do still incentivize salespeople to sell cars.

What do you guys think of the Tesla store experience? Let us know in the comment section below.