Tesla’s vehicles are becoming increasingly popular with taxi and shuttle services, which are pushing their vehicles a lot over short periods of time – giving us a good glimpse at how the cars hold up with high mileage.

Tesloop, a Tesla-only shuttle service based in Southern California, recently had a Model S reach 400,000 miles on the odometer and gave an account of how it is holding up.

Less than a year ago, we reported on one of Tesloop’s Tesla Model S hitting 300,000 miles in just 2 years. The company claimed that the vehicle alone saved them an estimated $60,000 on fuel and maintenance compared to a similar vehicle for their shuttle service, which mainly serves Los Angeles to Las Vegas.

The company detailed its maintenance costs for eHawk in a blog post:

Tesloop has incurred a combined maintenance cost of roughly $19,000 or about $0.05/mile. This cost breaks down to $6,700 for general vehicle repairs and $12,200 for regularly scheduled maintenance. The Model S’ full service record is available here. The record includes comparable estimated costs of running the service with a Lincoln Town Car instead of a Model S or Mercedes GLS class instead of a Model X. Tesloop estimates that a Lincoln Town Car or Mercedes GLS class’ combined maintenance cost to be around $88,500 ($0.22/mile) and $98,900 ($0.25/mile) respectively over 400,000 miles.

A lot of people are probably interested to know how the battery pack held up, but unfortunately, it didn’t. It was replaced twice during the vehicle’s 400,000 miles. 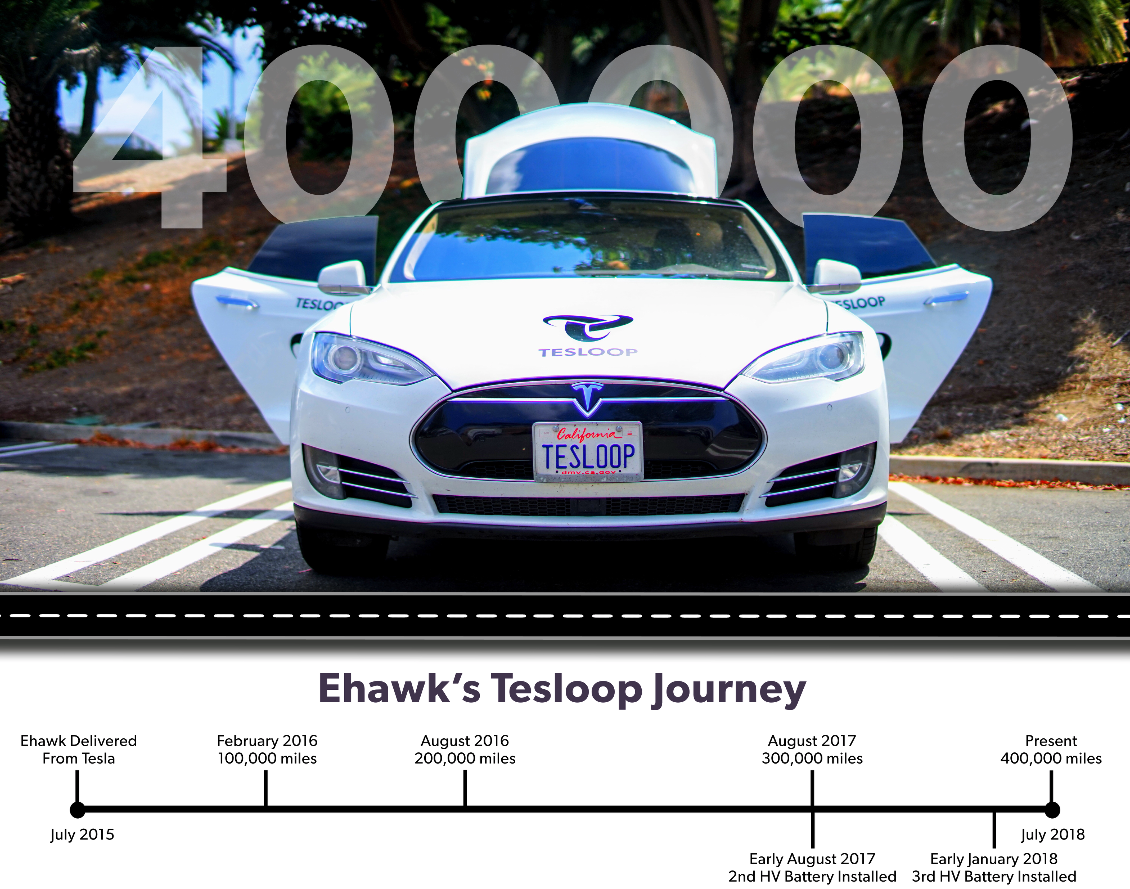 The first battery pack replacement happened after 194,000 miles. At that time, the battery pack energy capacity degradation was at ~6%, which is reasonable, but Tesla found a problem due to Tesloop’s frequent Supercharging.

Here’s the reason Tesla gave for the battery replacement:

Found internal imbalance in HV battery due to consistent supercharging to 100% from a low state of charge (SOC) without any rest periods in between. HV battery has been approved to be replaced. Also recommend that customer does not Supercharge on a regular basis and does not charge to 100% on a regular basis. We also recommend that the customer use scheduled charging to start charge 3 hours after end of drive at low SOC.

Tesloop says that it was supercharging the car multiple times a day and at 95 to 100% state-of-charge – two things that Tesla doesn’t recommend for the health of the battery pack.

The second battery pack replacement happened at 324,000 miles and Tesloop says it experienced a much more aggressive battery degradation of ~22%.

Tesla said that there was an issue with the pack:

Tesla repairs and reused parts of its old battery packs, which in this case were replaced under warranty.

Those actually weren’t Tesloop battery packs with the most cycles since it also has a Model X with its original battery pack after 300,000 miles. The company reports about ~10% of battery degradation.

As for the interior, which can be pretty rough after thousands of rides in a shuttle or taxi service, Tesloop says that it has proven to “hold up well”:

As you can see, the Model S eHawk is one of the rare Tesla sedans equipped with the ‘executive back seats’, which was briefly an option back in 2015.