Tesla is currently making its final end of the quarter push to bring Model 3 production up to its target of 5,000 units per week.

The automaker has now reportedly addressed one of the main bottlenecks as a manager claims that Tesla achieved the targeted production rate at Gigafactory 1, where they make the Model 3 battery packs and drive units.

In an email to employees earlier this month, CEO Elon Musk laid out a few specific areas that still represent bottlenecks for Tesla to achieve its 5,000 units per week target.

Musk has since reported progress at the controversial General Assembly line 4 under a tent at the Fremont factory and now it sounds like the Module Zone 4 bottleneck has also been addressed.

He claimed that Tesla more than doubled its throughput at the plant in about 3 months: 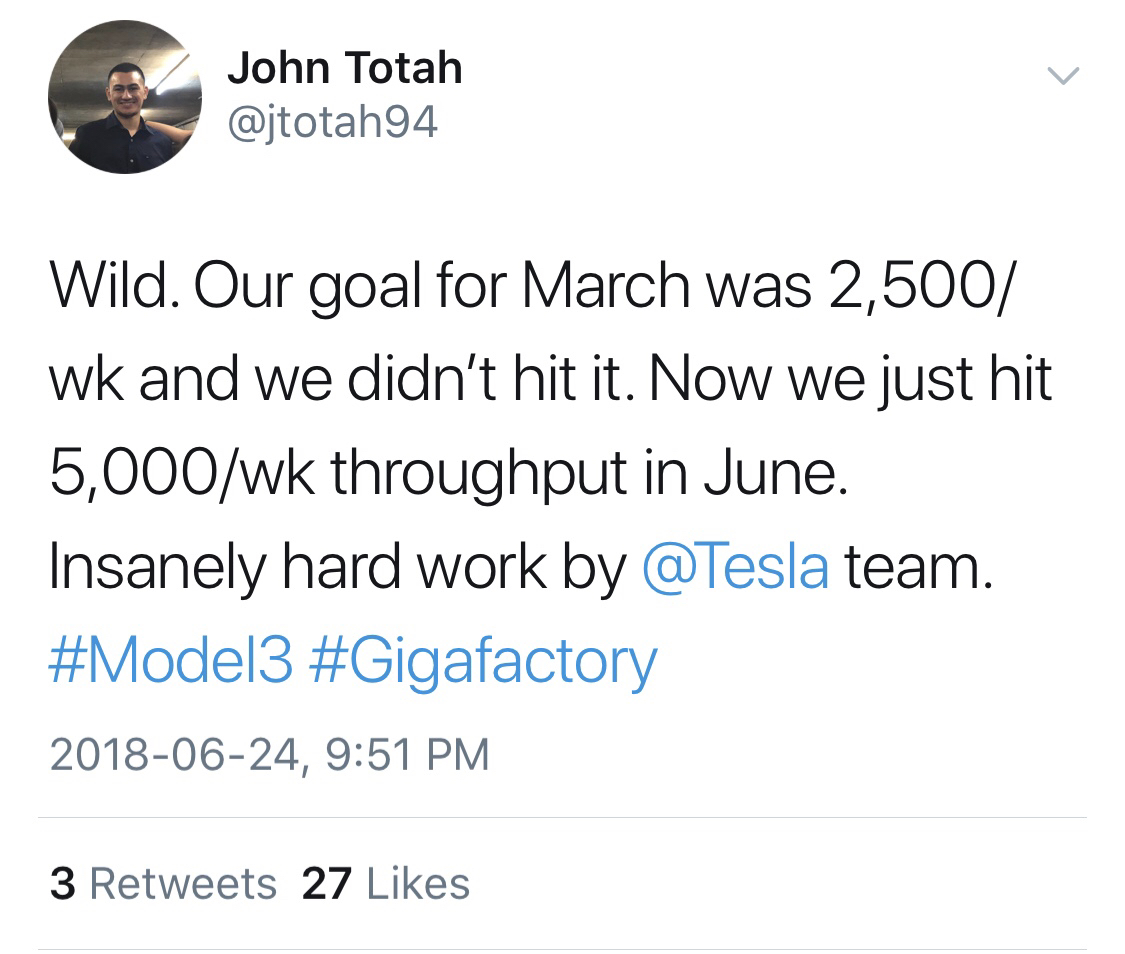 Earlier this month, Musk already claimed that Tesla was producing more batteries than any other battery factory in the world – without confirming the actual output.

At 5,000 Model 3 battery pack per week, it’s around 375 MWh of battery production and almost 20 GWh of annual production if they can maintain it. That’s without accounting for Powerwall and Powerpack production.

Tesla employees are not allowed to make public comments about internal information without being cleared by the media.

Totah quickly deleted his tweets after they gained attention, but not before making a few other comments.

Thank you. We want to sustain over 5k/wk since current capacity of the lines are built for a max 6k/wk. It was incredibly difficult to hit 2500 in March. We revised many processes and built new systems that worked better. Incredible work and brain power.

As we reported in April, Tesla changed its Model 3 production plan to add upgrades in order to increase the production capacity to a max of 6,000 units per week in June.

The idea is that after a margin of error, Tesla will finally achieve its targeted production rate of 5,000 units per week, which was first due in December 2017.

We contacted Tesla to comment on Totah’s statements about Model 3 production at Gigafactory 1. We will update if we get an answer.

We were able to confirm that Totah works at Gigafactory 1, but Tesla hasn’t confirmed the information that he disclosed.

I’d take it with a grain of salt, but it looks like it could be solid.

It looks like everything was on track at Gigafactory 1 aside from Module Zone 4 and in the previously mentioned email, Musk said that Tesla CTO JB Straubel was in charge of fixing the bottleneck.

It sounds like he and the team made it happen.

Now if that’s true, it doesn’t mean that the 5,000 Model 3 vehicles per week target is a done deal. It only means that they achieved the goal at Gigafactory 1.

Tesla still needs to make it happen in Fremont, where there are more bottlenecks according to Musk’s email.

Musk has been very confident about hitting the goal lately. He has just a few more days to hit it.

What do you think? Is Tesla going to hit the goal? Does it even matter if Tesla is still producing 4,000+ units per week? Let us know what you think in the comment section below.