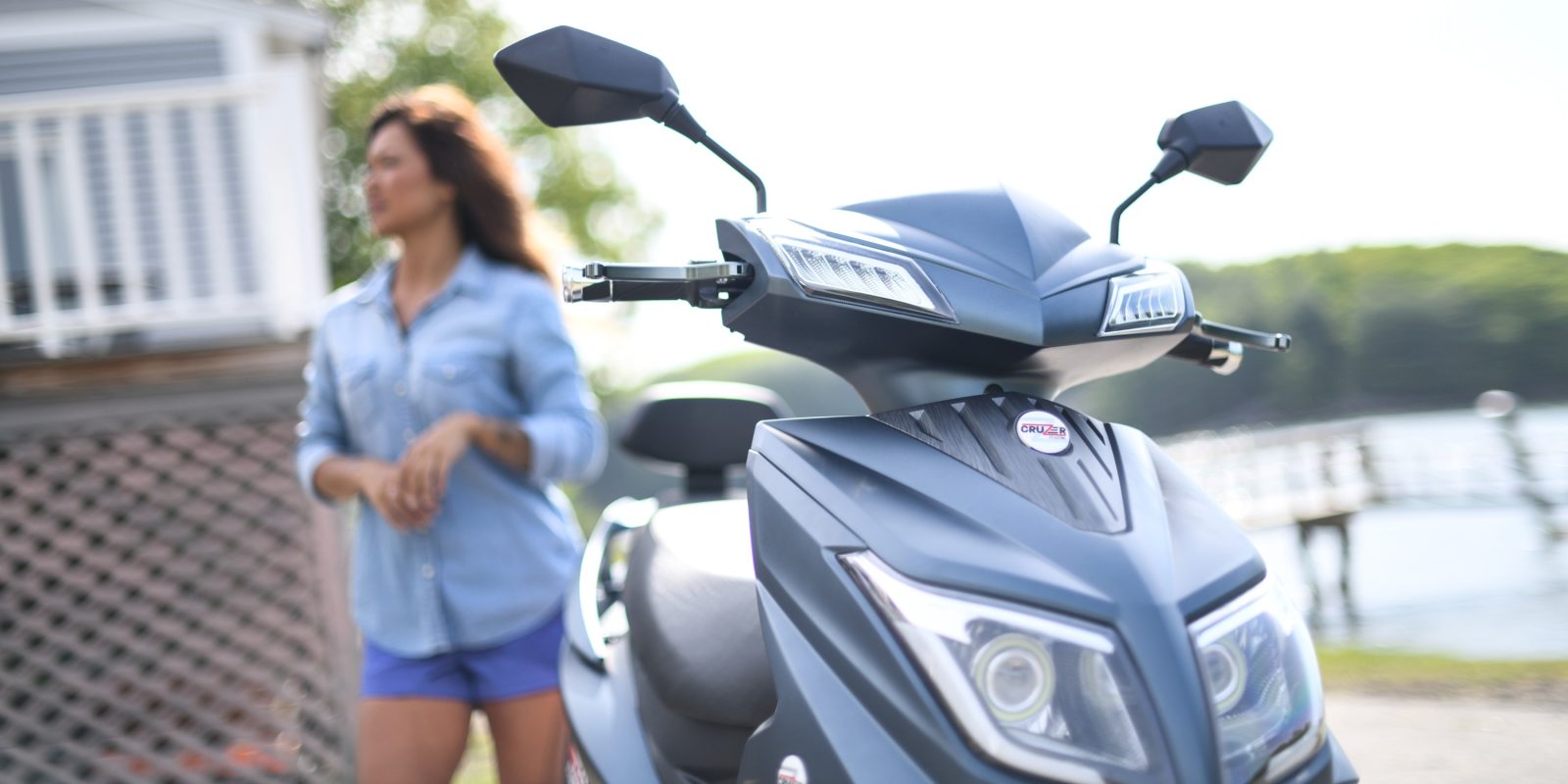 Even though we often talk about Europe and Asia having all the options for electric scooters, there are still a few models available in the US. But except for the Detroit-built GenZe 2.0, most of the currently available alternatives are either small, under powered, or use archaic lead-acid batteries.

Today that changes, as CruZer Scooter has launched their new e2000 electric scooter in the US.

The CruZer Scooter officially has a top speed of 30 mph (48 km/h), though early testers have reported that it packs a bit more of a punch than claimed.

Like many other scooters with a rated top speed of 30 mph (48 km/h), it is not considered a motorcycle in most states and thus does not require a motorcycle license. Anyone with a standard driver’s license should be able to operate it. 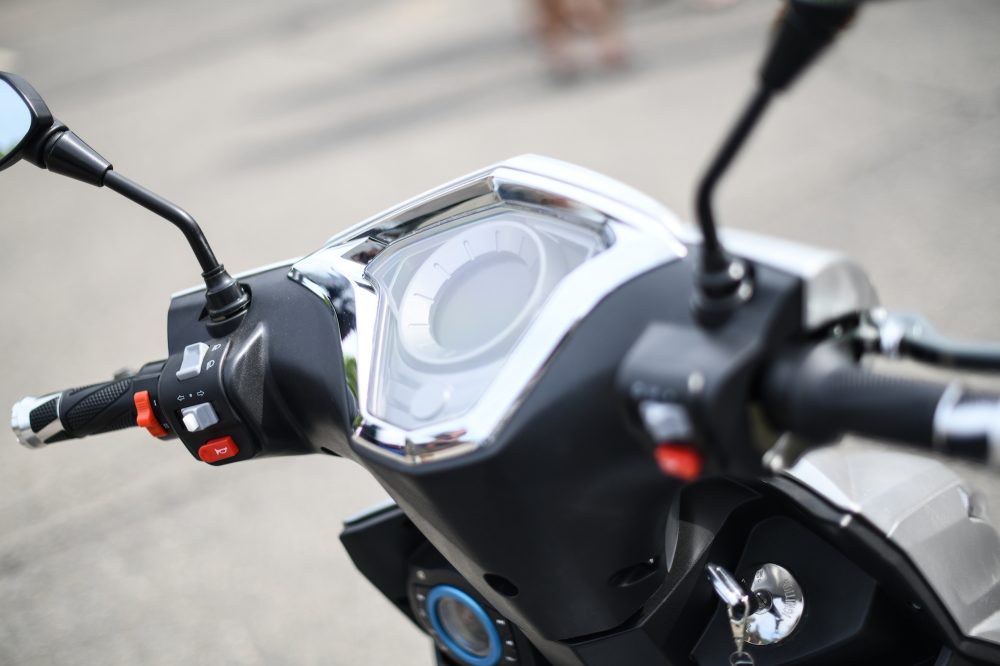 A handlebar mounted selector allows the rider to switch back and forth between low and high-speed modes.

The CruZer Scooter comes standard with a 72V 30Ah removable Li-ion battery, rated at 2.19 kWh and sufficient for 40 miles (64 km) of range. 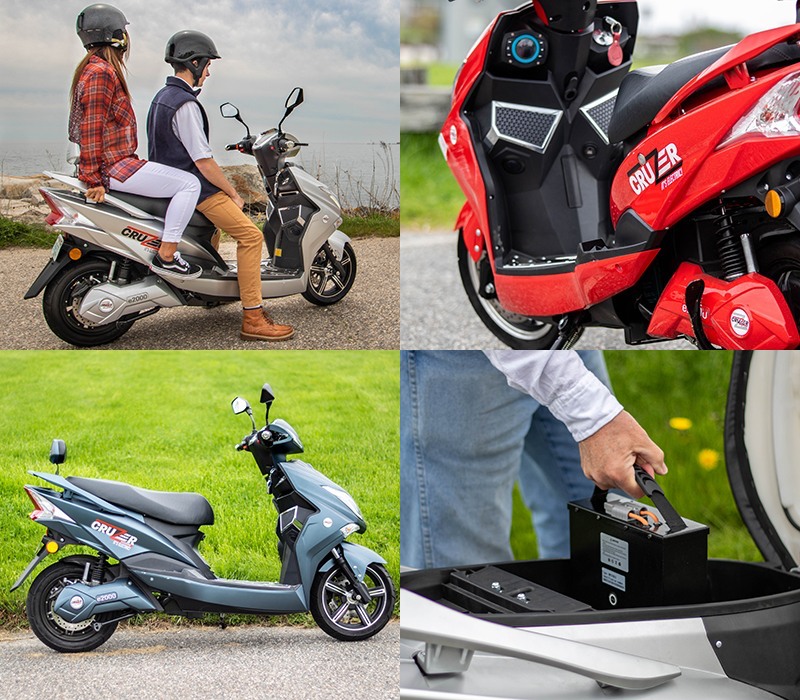 Because the battery is removable, the scooter can be parked outside while the battery is brought inside to charge. Additionally, a removable battery allows for battery swapping, where the user can keep a second fully charged battery on hand to swap in for the first in place of rapid charging.

Speaking of charging, it takes between 4-6 hours with a low power, Level 1 (110 VAC wall outlet) 5A charger, though presumably a higher power Level 1 charger could reduce the charging time.

The swappable battery packs are rated for 700-900 cycles before reaching 80% of their original capacity. 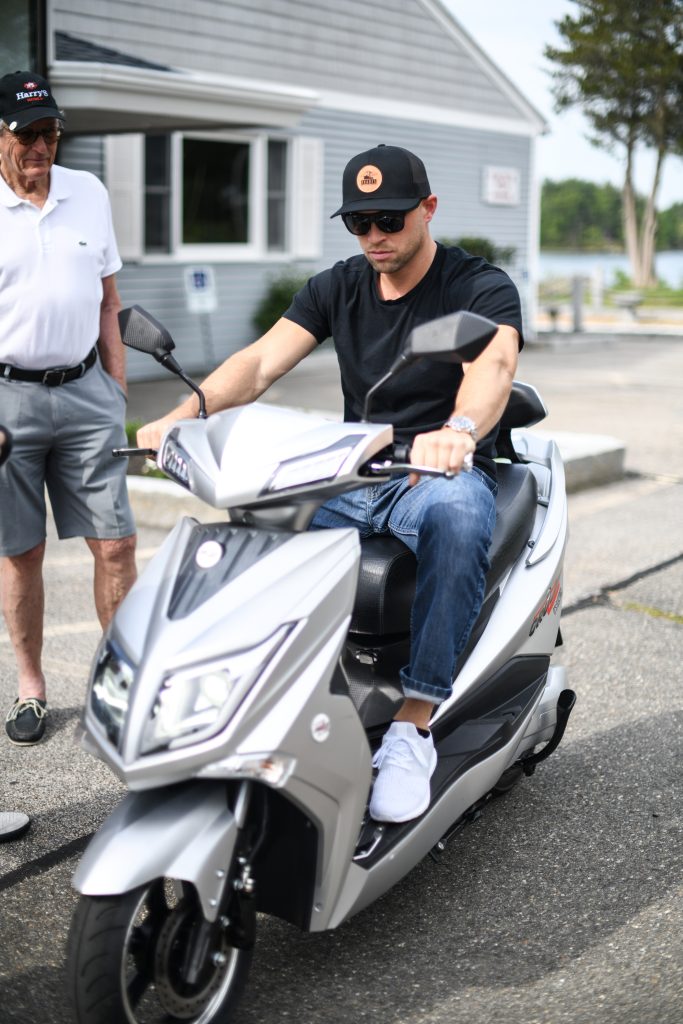 The CruZer Scooter e2000 is built on a longer platform than most smaller electric scooters, allowing for more cargo space and a seat large enough for two people. Now you can pick up that cutie at the bar after you impress him or her with your sensible, environmentally friendly form of transportation – as long as you’re both under the 330 lb (150 kg) carrying capacity of the scooter.

On the mechanical side, the scooter comes with front and rear disc brakes and 12″ tubeless tires. Suspension includes front telescopic and dual rear coilover suspension, and the scooter weighs 225 lbs (102 kg). 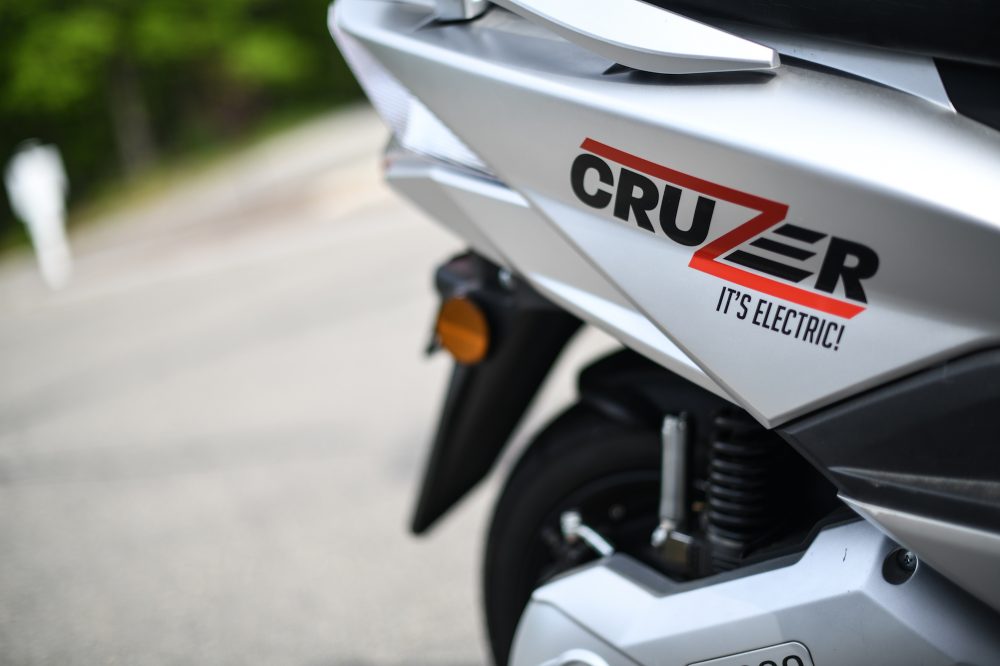 Lighting consists of front, rear and panel LED lights, while the instrument panel is an LED-backlit LCD.

The Chinese-built CruZer Scooter comes equipped with bluetooth, an FM radio and speaker as well as a USB port to keep your phone charged while riding, which is especially important for those that use GPS frequently.

The CruZer Scooter has already met all EPA and DOT standards, and first deliveries are expected in September. Pre-orders are now open via Indiegogo, where the CruZer Scooter e2000 can be purchased for a pre-order price of $2,500. After the pre-order period, the company says the scooter will retail for $3,300.

While that price is higher than most gas scooters, the cost of ownership of an electric scooter is lower, and there is just no comparison to the cost of car ownership. With cheap electricity and a lack of major wear parts, not to mention cheaper insurance, registration and ample parking, scooters make a lot more sense in dense urban environments.

Ted Fuller, the President and CEO of CruZer Scooter, has high hopes for the company’s future, despite the US lagging far behind Europe in scooter use. Speaking to Electrek, Fuller said:

“Projections show that around 11,000 electric scooters will be sold in the US this year, and that number is quickly growing year over year. We are aiming for sales of around 750 to 1,000 scooters in our first year.”

With such little competition so far in the US, CruZer Scooter very well may be on to something.

Yea, it’s not a speed demon, but it’s not meant to be either.

These scooters are for getting around town in cities and suburbs on roads with speed limits in the 35 mph (56 km/h) range or less. That pretty much describes most urban areas in the US. You won’t be taking the CruZer Scooter on any highways, but you can take it all over the city.

Plus, the US isn’t exactly ripe with electric moped and scooter options, so this is a welcome addition to the local market.

I’ve always been an electric bicycle guy, but sometimes it can be tough to do grocery shopping with only what fits in a backpack or panniers. With a scooter, you can hang a few bags from the bag hook on the dash, put a few more bags at your feet on the floorboards, and then cram everything else under the seat. AND you can carry a passenger. What’s not to like?

Of course you have to remember that this is a crowdfunding campaign on Indiegogo, and you are pre-ordering a vehicle that doesn’t yet exist, or at least isn’t imported to the US yet. So there is some risk here, like in most pre-order situations.

But what do you think? Will the CruZer Scooter be successful in the US? And would you ride one? Let us know in the comments below.