There has been a lot of hype around the Volkswagen I.D. R Pikes Peak, an all-electric race car, ahead of the Pikes Peak International Hill Climb.

Now the vehicle looks to back it up with a good performance and it is off to an impressive start as it sets the fastest time in Pikes Peak’s qualifying round.

Romain Dumas is driving the I.D. R Pikes Peak for Volkswagen and managed to set a qualifying time of 3:16.083 minutes – beating the second place by 11.049 seconds, which was set by Simone Faggioli in his Norma M20 SF PKP with its combustion engine.

“That was a very good day for us. The I.D. R Pikes Peak is incredible. I have never experienced acceleration and power like that in a racing car. I am noticing how the car and I are becoming more and more of a unit with every kilometer,”

The famous Pikes Peak competition has been emerging as a proving ground for electric vehicles in recent years. Now VW wants to make some records to showcase its latest EV technology.

In the qualifying round, competitors are starting from the 8.3-kilometre mark (5.1 miles).

It’s encouraging for the all-electric race car, but it hasn’t been pushed to its limit yet.

Previous electric cars attempting the race had troubles with overheating during the climb and turned to unconventional cooling methods like a ice bath: 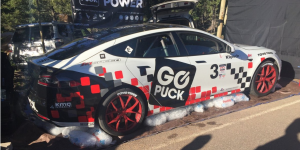 They released more details about the drivetrain last week.

The official race is this weekend. It will be interesting to see how it fairs.