Tesla Model 3 got the Consumer Reports treatment and the consumer review organization announced that they will not be recommending the electric car due to issues with the 60-0 mph braking test, wind noise and touchscreen inputs.

The automaker fired back with its own test results, which are apparently better than CR’s.

Consumer Reports claims that its braking test resulted in a 152-ft average stopping distance from 60 mph. That contradicts Motor Trend which achieved a 60-0 in 119 feet albeit with the 19″ sport rims.

CR wrote in the report:

The magazine says that it let the brakes cool down between tests, but they couldn’t get a decent stopping distance after the first try:

In our testing of the Model 3, the first stop we recorded was significantly shorter (around 130 feet, similar to Tesla’s findings), but that distance was not repeated, even after we let the brakes cool overnight. Consumer Reports publishes a distance based on all the stops we record in our test, not just the shortest individual stop.

Tesla claims that based on its own test with the same tires, the average stopping distance is a significant 20-ft shorter. Car and Driver, meanwhile, gave the Model 3 a much better 70-0 braking report card although they noted:

Tesla barely ekes out a win in this category with its stop from 70 mph, although we did notice a bizarre amount of variation in our test, which involves six consecutive panic stops—the third of these stops took an interminable 196 feet.

Car and Driver also had a long max braking results from their own test – though still better than some competition: 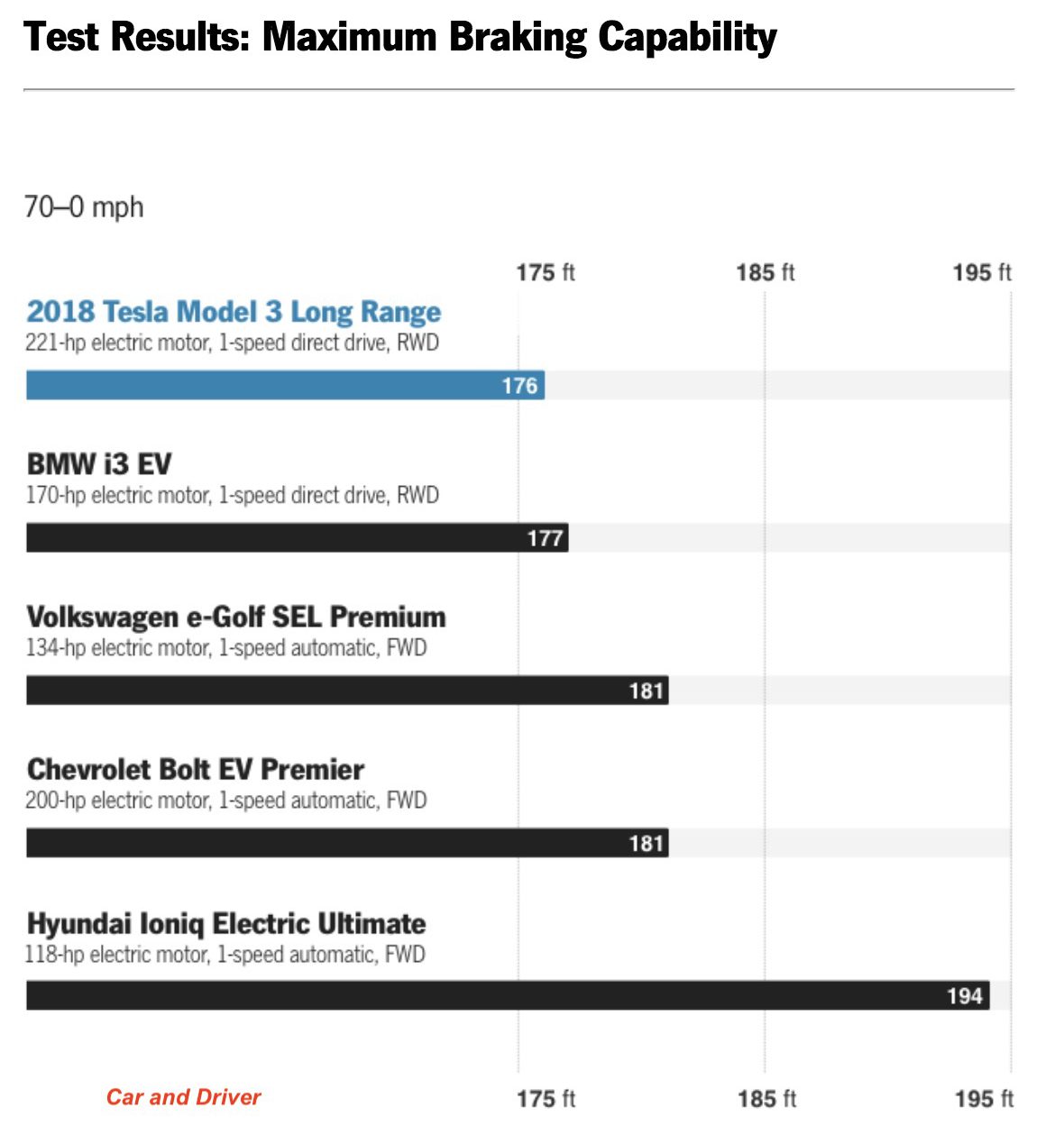 Tesla’s own testing has found braking distances with an average of 133 feet when conducting the 60-0 mph stops using the 18” Michelin all season tire and as low as 126 feet with all tires currently available. Stopping distance results are affected by variables such as road surface, weather conditions, tire temperature, brake conditioning, outside temperature, and past driving behavior that may have affected the brake system. Unlike other vehicles, Tesla is uniquely positioned to address more corner cases over time through over-the-air software updates, and it continually does so to improve factors such as stopping distance.

Last week, the Insurance Institute for Highway Safety (IIHS) released the first results of their safety tests for the Model 3, which included the front crash prevention, which it found to be ‘superior’.

While it mainly tests the vehicle’s automatic emergency braking, the actual brakes are also put the tests, but they only test them up to 25 mph, which can make a significant difference from 60 mph.

Under then their findings from the braking test, Consumer Reports also didn’t like that all the controls are on the touchscreen, wind noise, and a “stiff ride”, which all led to the magazine not recommending the vehicle.

Very strange. Model 3 is designed to have super good stopping distance & others reviewers have confirmed this. If there is vehicle variability, we will figure it out & address. May just be a question of firmware tuning, in which case can be solved by an OTA software update.

Even if a physical upgrade is needed to existing fleet, we will make sure all Model 3’s having amazing braking ability at no expense to customers

I am admittedly a bit concerned about the brake test results. I myself didn’t use the brake much at high-speeds when driving the Model 3 due to the regenerative braking.

With this said, I’ve never heard this was a problem with the many owners I’ve spoken to aside from the time an owner brought his Model 3 to the race track, but that’s to be expected to a degree due to the extreme driving style.

I’d like to see more tests and if you have experience with the Model 3’s braking system, please let us know in the comment section below.

As for Consumer Reports’ other complaints, I am surprised by the claim of wind noise being an issue. I found the Model 3’s cabin to be much quieter than my Model S’ and I’ve heard similar reports from Model 3 owners.

When it comes to the touchscreen input, I think that’s a bit dumb. Buyers know what they are getting into with this and it’s basically a preference thing. I can’t see it being a deal breaker.

But it wouldn’t be the first time that the magazine made controversial moves to create headlines about Tesla – sometimes positive and sometimes negative.

Most notoriously, the product review magazine said that the Model S was “the best car it had ever tested” and that it “broke its rating system”. It had to be modified because the P85D was so good that it scored 103 out of 100, which didn’t sit right with a lot of people.

Last year, they have been calling for Tesla to disable the Autopilot and change the name of the system – something Tesla refuses to do.

Tesla’s stock plummeted after CR downgraded Model S because the new vehicles with the second generation Autopilot hardware didn’t have Automatic Emergency Braking. In that case, the magazine strangely originally gave points to Tesla in the original testing of the new Model S even though it didn’t have AEB and it took those points away right when Tesla was releasing the update.

So I don’t know. They have certainly done some weird things in the past, but that doesn’t mean they are wrong about the brakes here.