For earth day, Tesla released some interesting data about its fleet of electric vehicles and its energy products with a fun Lord of the Rings theme.

Back in October 2016, we reported on Tesla reaching the 3 billion electric mile milestone and the company’s global fleet has managed to add 500 million in less than 3 months – bringing the total to 3.5 billion in December and another half a billion more by March 2017.

We were able to track the progress through the Tesla road trip page and Tesla confirmed that its global fleet reached over 5 billion electric miles driven last July.

The tracker is not available anymore, but Tesla released a new number for earth day – 7.2 billion miles – along with several other stats (via Tesla’s Instagram): 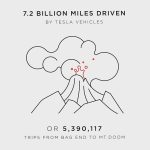 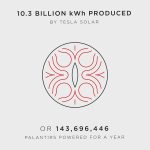 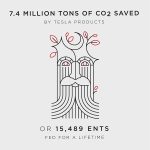 Normally, Tesla likes to compare the total mileage of its fleet to trips to the moon or around the earth, but they went with a Lord of the Rings theme for (middle) earth day, as they put it.

They claim that between the EV fleet and its energy products, Tesla saved 7.4 million tons of CO2 from being released into our atmosphere.

As for the growth rate of the fleet, we are talking about over 2 billion miles added in less than a year.

Back in 2016, Tesla CTO JB Straubel highlighted how quickly the company is adding electric miles by comparing the Roadster fleet with the Model S/X fleet:

Now a similar situation is happening with the Model 3 launch and production ramp, which should in turn eclipse the Model S/X fleet in terms of global mileage.

Tesla added record numbers of vehicles on the road during its last two quarters and it is expected to keep doing it for the rest of the year as the Model 3 production ramp is finally starting to increase more consistently.

As for Tesla’s energy division, things have definitely slowed down on the solar front since the acquisition of Solar City.

The company started focusing on more profitable projects and it slowed down the overall deployment, but they are expected to pick things up again this summer as Tesla starts to roll out the solar roof tiles in more significant numbers while the energy storage is picking up steam in a big way with tons of new projects announced in recent months.

It think it’s going to be an exciting year for Tesla and the EV/clean energy industry in general. We are already off to a great start.