Last week, we reported on the first few customer installations of the new Tesla solar roof tiles, but the systems were unfortunately not up and running due to delays with the local electric utility.

Now one of those first customer installations is now connected to the grid and working.

We spoke with Tri Huynh and his ‘Tesla house of the future’ with a Tesla solar roof installation and 3 Powerwalls.

He gave us a great exclusive look at his new energy system, but he didn’t expect it to be ready until a long-delayed grid connection was up and running with his local electric utility, which could take up to 2 months.

Another early Tesla Solar Roof customer was in a similar situation, but she confirmed this weekend that her system is now up and running – making it likely the first working Tesla solar roof installation aside from the early installation at the homes of Tesla employees and company insiders:

Tesla Solar roof is up and running. Current output is 5.0kw on a cloudy late morning. pic.twitter.com/FMWhpIHgJ2

The screenshot on the right is the power flow information from the Tesla mobile app and in this case, it shows that the system is producing 5 kW and feeding 300 watts to the house while also charging the Tesla Powerwall at a rate of 4.7 kW.

Tesla told Electrek last week that the system is rated at 9.85 kW at full capacity.

Later on, the owner shared another screenshot on Twitter showing the system producing 6.2 kW and since the Powerwall was now charged, it started feeding electricity from the solar roof into the grid: 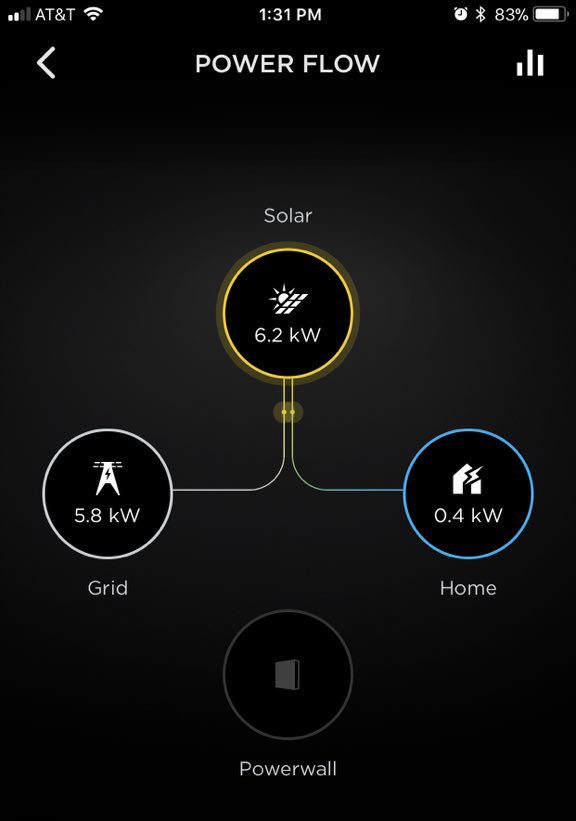 The owner of the house also shared on Twitter a few interesting images showing the installation process of the solar roof tiles:

Interestingly, she also said that Tesla optimized the system with “about 40%” of the tiles having solar where it is best positioned to get sunlight and that the new solar roof with Powerwall ended up costing in the “mid $50,000” after the federal solar tax incentives.

For comparison, Huynh told Electrek that his system, which is very similar but with more Powerwalls, ended up costing about $100,000 before the federal incentive.

As we previously reported, Tesla says that the “typical homeowner can expect to pay $21.85 per square foot for a Solar Roof” with a mix of regular tiles and solar tiles.

We will keep a look out for more installation during this spring and summer. If you have one or know about an installation, please let us know at the contact information below.

Tesla solar roof products are perfect for homeowners who want solar and need a new roof relatively soon, but a regular solar panel installation is still a good solution for people who don’t need a new roof. Solar and energy storage prices are highly dependent on your market (electricity cost, gov incentives, etc.) and your property. We suggest getting quotes from more than one installer to make sure you get the best energy solution for your place. UnderstandSolar is a great free service to link you to top-rated solar installers in your region for personalized solar estimates for free.