For DIY enthusiasts in the green energy community, homemade lithium-ion battery packs have long been a holy grail. For everything from home solar energy storage to garage-built electric bicycles, go-karts and full-size EVs, lithium-ion batteries were once one of the most limiting factors for hobbyist and makers.

However, the last few years have seen an impressive upswing in availability of parts, tools and knowledge in the DIY lithium-ion battery pack space. This has led to increasing opportunities for creative DIYers to shuck the bonds of traditional suppliers of expensive Li-ion battery packs and instead develop their own custom batteries for a variety of projects and applications.

I’ve personally been building my own battery packs since 2011, when I realized that the limited options available to tinkerers like me simply weren’t enough to fit the needs of my solar and EV projects. Back then, battery cells were limited to a few commercially available options. If you wanted something special, like high power or high-capacity battery cells, you had to tear apart power tool battery packs to harvest the specialty cells.

Today though, well-known companies such as Samsung, Panasonic, LG, Sanyo and Sony are producing dozens – if not hundreds – of different types of high quality battery cells that hobbyists are using to build battery packs for countless green energy projects. In addition, sophisticated tools needed for battery pack building, such as spot welders that used to be $1,000+ specialty machines, have come down in price and size to the point where hobbyists can use them in their homes and garages.

Large communities have sprung up all over the internet, showcasing the homemade battery projects that creative individuals have produced around the world. One of the first and largest of these communities revolved around electric bicycles. Ebikes were some of the first consumer products to require large Li-ion batteries with dozens of individual battery cells.

Combining the high cost of these batteries with the DIY nature of many in the early ebike communities, DIY batteries were an inevitable result. Custom ebike makers that wanted more options for batteries began buying up the newly available consumer spot welders to create their own custom battery configurations. A DIY battery renaissance was born.

Because they are used to power entire homes, DIY powerwalls often require many thousands of individual battery cells. At $3-6 per cell though, builders had to get creative. The community discovered that old laptop batteries destined for recycling centers often contained perfectly good battery cells, largely as a consequence of computers dying long before the batteries had served their useful lives.

Scrupulous DIYers could harvest the cells from these laptop batteries, sometimes even finding them for free at computer repair shops and retailers that are often required by law to take back old Li-ion batteries. This had a fascinating effect on the battery recycling economy. In a matter of months, old laptop batteries went from being annoying e-waste that most retailers and collection centers had trouble dealing with to a commodity that was being sold off by the pound.

Unlike most DIY electric bicycle batteries that are spot welded together like professionally produced battery packs, DIY powerwall builders needed a way to economically join thousands of cells quickly, cheaply and in a way that would allow them to remove cells that went bad over time. Thus, the DIY powerwall community adopted the sometimes controversial method of soldering battery cells together into their massive battery packs. This soldering process had the benefit of allowing builders to add in cell-level fuses like Tesla includes in their packs, but the jury remains out on exactly how large of an effect the heat of a soldering iron can have on the longevity of Li-ion battery cells.

As battery pack building started becoming more accessible, I began committing to paper all of the knowledge and experience in DIY lithium-ion battery pack building I had collected over the years. This effort to create a single source of high quality educational content on DIY batteries eventually turned into the Amazon bestselling book DIY Lithium Batteries.

Between writing the book and running a YouTube channel that teaches people the art of battery building, I’ve interacted with countless makers and hobbyists that wanted to join the DIY lithium battery craze. One of the most common desires I saw was for a modular battery pack building system. Instead of using welding and soldering to create permanent battery packs, DIYers wanted to be able to swap out lithium batteries the same way you swap out AA’s in your TV remote. Nothing like this existed on a scale and power level appropriate for powering large energy storage installations or electric vehicles. So I got to work with a team of bright, enthusiastic young engineers and designers and we created a solution.

Last summer we debuted the first version of our idea, called the Vruzend battery building kit. It incorporated press-fit battery caps that fit on the end of common lithium-ion battery cells, using spring-loaded terminals and threaded terminal posts. The caps lock together, allowing the battery builder to create the exact size, shape, voltage and capacity of battery needed for any project. 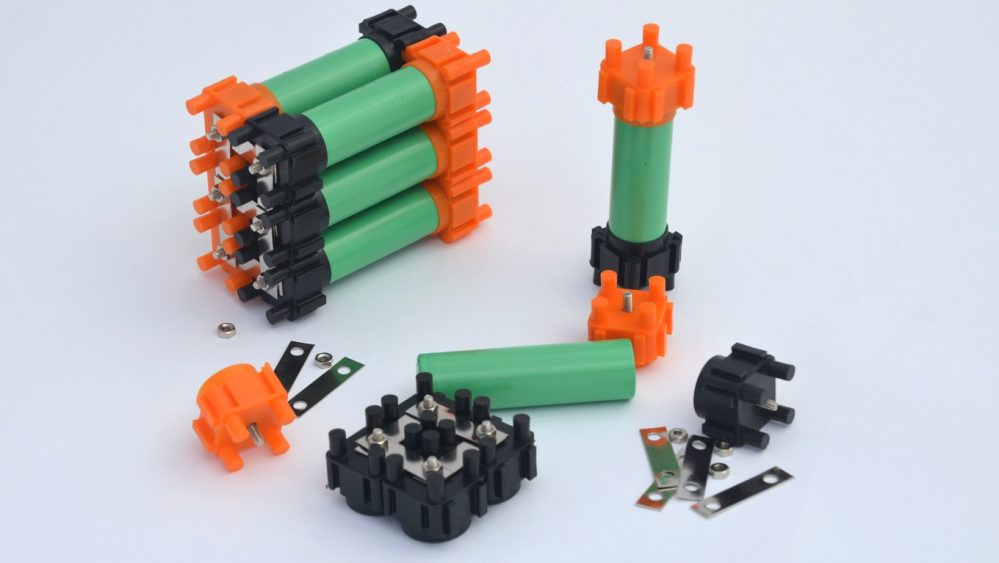 I believe the future of DIY lithium battery building is incredibly bright for hobbyists and makers in the green energy field. Whether you’re building a solar-powered toy or an electric race car, a growing DIY battery building industry is waiting at your fingertips.

[Editor’s note: A few commenters have noted concern that this is an ad or sponsored post. The circumstances are that we’ve known Micah for awhile and were excited about the product that launched this week. Rather than write about it, we thought it would best to hear directly from the horse’s mouth. We didn’t receive any money or benefits from this post. . -Seth Weintraub]