Here’s something you don’t see every day: an electric autonomous rideshare concept car from a major automaker.  Oh wait, nevermind, it’s the Geneva Auto Show.  That’s exactly what you see every day.

But this one, Renault’s newest effort, doesn’t seem like it’s just more-of-the-same.  While it’s obviously a concept car, with extra emphasis on “concept,” it truly embraces that concept nature and steps away from the realm of “normal” and into a totally different driving future which actually looks fairly palatable, and even realistic.

First off, as an autonomous vehicle, there’s no need for a driver, so there’s no place for a driver.  The entire cabin is wide open, with a bench seat for up to 6 passengers surrounding the whole vehicle.

The EZ-GO will be capable of Level 4 autonomy, which means that no driver will be needed or expected at any time in the car’s normal operating parameters (downtown in a city, as opposed to, say, off-roading).  This means the car can make its way from station to station with no human to help it, and if it gets in an accident, it will be able to pull over safely and do any other critical vehicle functions expected of a human driver. 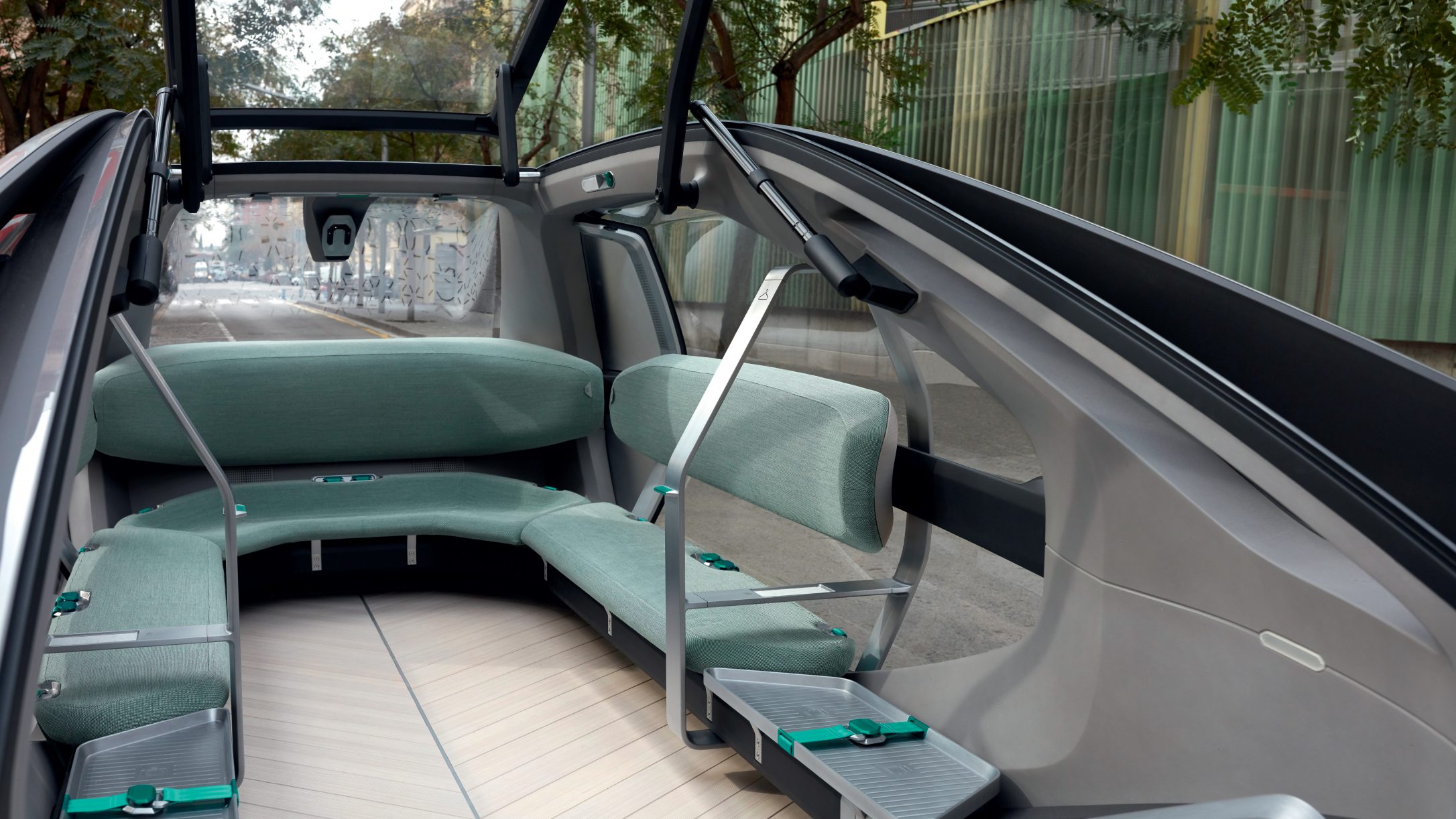 We have seen several other autonomous “shuttle-like” concepts in recent years from Toyota, NAVYA, VW, and more. 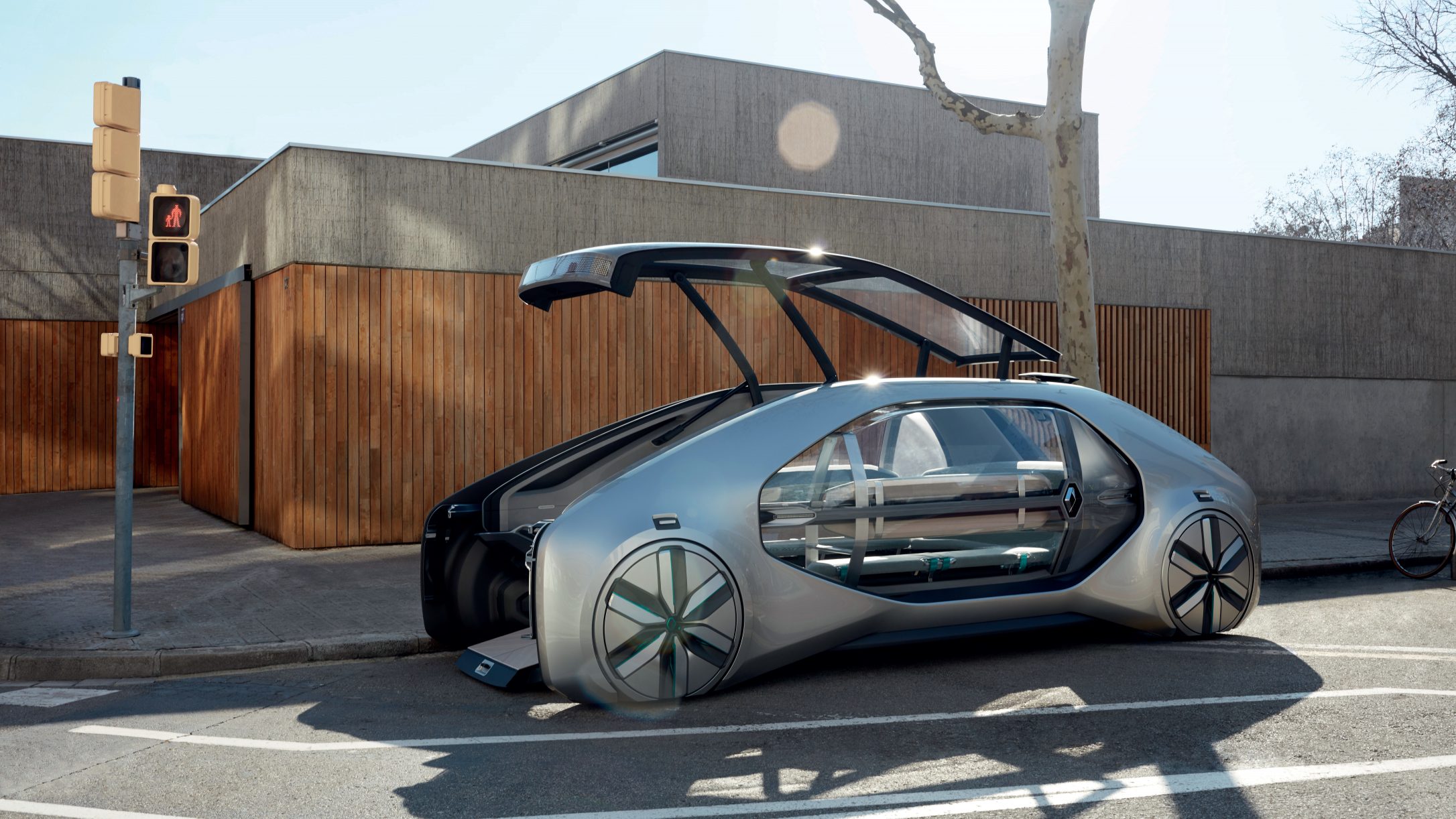 But in its stated purpose, they do seem to have checked all the boxes.  The car can be ordered through an app to pick you up anywhere, or it can be ordered at physical stations set up around the city like small bus stops/taxi stands.

These physical stations have a raised platform which the car can connect to for ultra-simple entry into the car, even for people with limited mobility.  The car’s “door” consists of nearly the entire roof which lifts up to create a massive, yawning portal which passengers can walk, or ride wheelchairs, or push a stroller into.  Even when not mated to a platform station, there is a fold-out ramp to allow wheelchair access.

The ordering process through the app lets riders specify whether they want the car to themselves or whether they don’t mind sharing it with others, which could allow for a fun social atmosphere for up to six passengers, or your own quiet ride in which you can do work, or read, or sightsee through the large glass roof and windows.  The car has built-in wi-fi and charging points for devices to help facilitate this, and a display which shows information about the city. 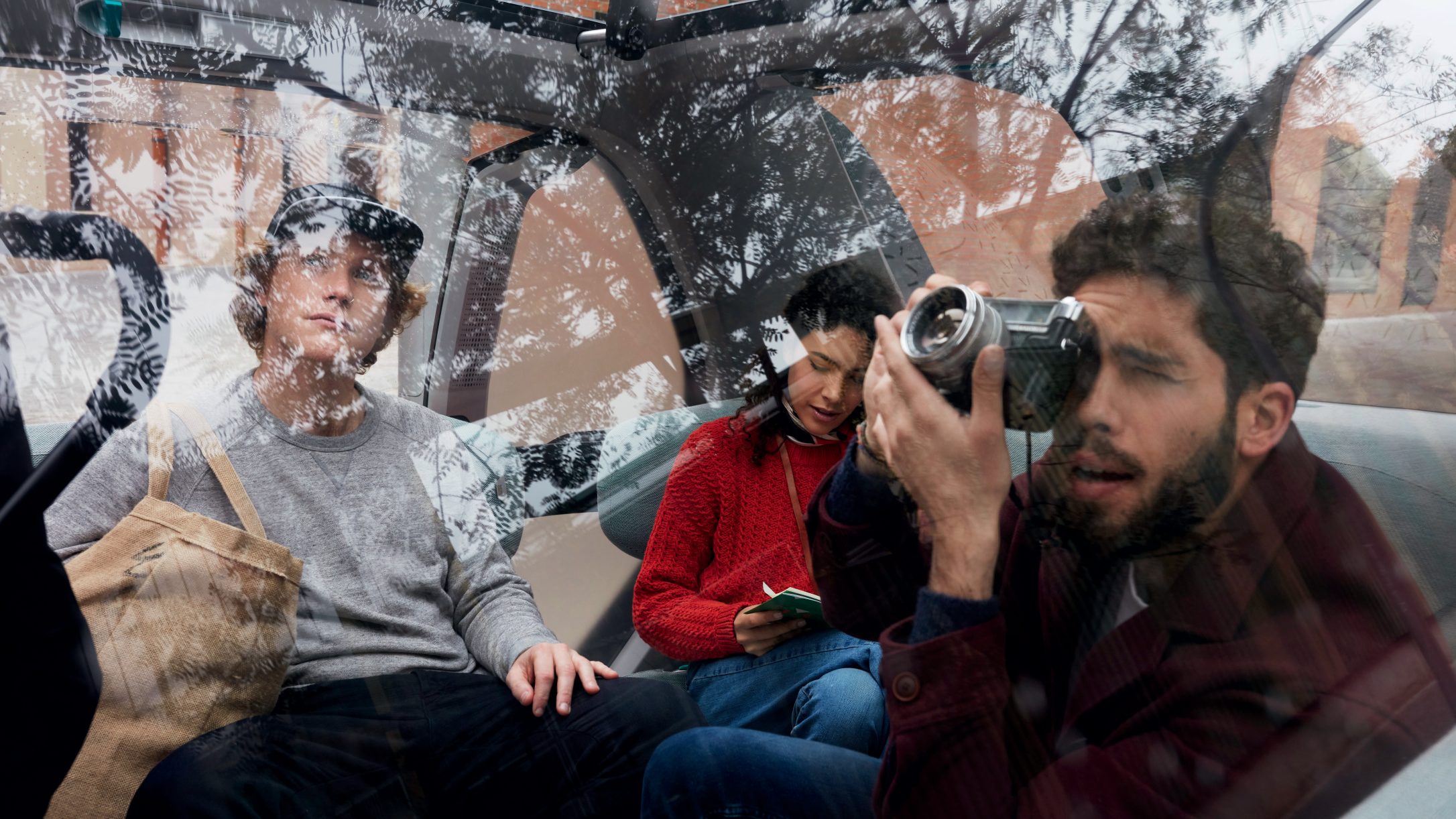 Vehicle performance is obviously not the main design parameter here with a top speed of just 30mph, but the car does have active suspension to reduce bumpiness of city roads and 4-wheel steering for more agility in tight spaces.

The vehicle’s low speed works well within a city environment, but is also an intentional part of the design in order to make the vehicle more safe, both for occupants and pedestrians.  Renault points out that many of the car’s features have been designed for safety – the large front opening lets passengers get in and out of the car without having to open their doors into traffic, the opening is lit up so it’s easier to see the ramp at night, and there are light strips on the front and back of the vehicle which provide a visual signal to pedestrians showing when its safe for them to cross the street in front of the vehicle.

Finally, Renault claims that the price of the car will be affordable for private owners or for fleets, with a “highly competitive” price per mile.  As a private owner, you could use the car as your personal shuttle around town, or any member of the public can use it as a taxi replacement for what would likely be a smaller fee than a traditional taxi (with less energy cost and labor cost involved).

Renault’s “Drive the Future” strategic plan for 2017-2022 includes 8 pure electric models, and they are targeting an EZ-GO release near the end of that period, in 2022.  While most automakers have similar plans and not much to show for them yet in terms of cars on the road or sales, as a member of the Renault-Nissan alliance Renault is part of an entity which has sold more pure EVs than any other in the world – including Tesla.  So while this is a crazy concept car, they can be taken more seriously than most when it comes to electric car plans, at least.

That said, 2022 seems like a very close target for a fully autonomous city car, and it’s quite likely that these would be limited in their rollout as I doubt many, if any, cities will allow for fully autonomous cars in anything but a testing capacity that near in the future.  But after a few do, as long as those launches are successful (and not premature), then other large cities will probably fall in line rather quickly.

Renault has shown other autonomous-drive concepts before, such as their SYMBIOZ concept from last year, but those were a little more on the “traditional car” side of things, and the EZ-GO is a significant departure from tradition, a much bolder concept.

But along with that boldness comes a design which feels consistent to me – that instead of just bolting on an autonomous drive system to a traditional car design, they completely separated themselves from tradition and reimagined a different driving future.  This is what concept cars should be, visions for the future with neat new ideas incorporated into them, which actually seem practical for their use case, instead of just slightly-more-boldly-styled incremental improvements over previous model years.

What do you think?  Tell us below.