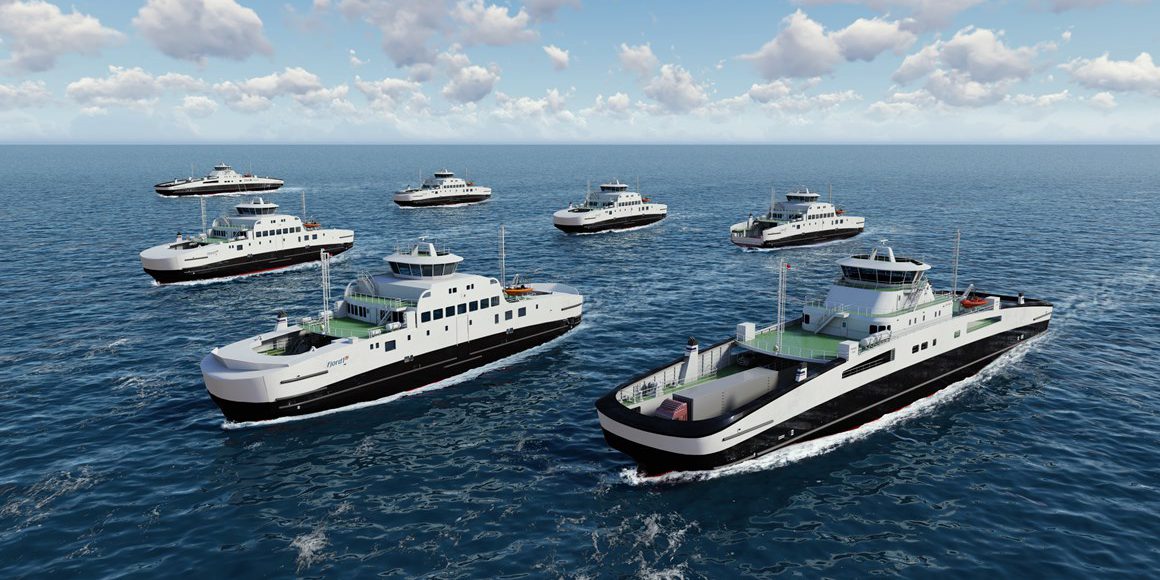 Several recent projects seem to indicate that maritime transport is well on its way to go electric and ferries are at the forefront.

The Havyard shipyard announced that it received a contract to build seven battery-powered ferries for Fjord1, Norwegian transport conglomerate.

The news comes after the operators of the first all-electric ferry in Norway, the ‘Ampere’, reported some impressive statistics after operating the ship for over 2 years.

They claim that the all-electric ferry cuts emissions by 95% and costs by 80%.

Unsurprisingly, the potential cost savings are attracting a lot of orders for new electric ferries and for the conversion of existing diesel-powered ferries.

Now Fjord1, a major Norwegian transport conglomerate which operates 75 ships, placed an important order with the Havyard Group to build a fleet of battery-electric ferries – rendered above.

Unlike most current electric ferries on the water, like the two massive ferries that became the biggest all-electric ships in the world last year, the fleet will not be electric conversions of current ships, but they will instead be designed from the ground up to be electric.

“We have “put the ferries in operation” by using advanced simulation tools, this way we could optimize them to the outmost. Various operating profiles have been tested and reviewed, and we have achieved results that have made Fjord 1 choose us as contractor for designs.”

Fjord1 says that the ferries will be used in Hordaland and Møre og Romsdal, starting on 1 January 2020.

The company is currently modernizing its fleet as the Norwegian authorities have demanded zero-emission technology solutions as part of the effort to reduce emissions from the country’s ferry fleet, which is one of the most important in the world.

Norway is already leading the way for electric ground transport. It’s now starting to take the lead in electric maritime transport on top of seriously looking into electric air transport.

But ferries are right now a lot easier to electrify than most of those other modes of transportation.

The fact that they operate on relatively short routes between the same ports where they can install charging infrastructure makes it a lot easier to go electric than with cargo ships, which can have more complicated and longer routes.

They will install a massive 1 MWh battery pack to power the 185-meter long ship – making it one of the largest electric ships in the world.