Tesla gives update on Model 3 production: on track for 2,500 per week by next month

After a few difficult months in what CEO Elon Musk called “production hell”, Tesla gives an update on the status of Model 3 production as part of the release of their fourth-quarter financial results after market close today.

The company says that it is on track for 2,500 units per week by the end of next month, but it is leaving room for more delays.

“We continue to target weekly Model 3 production rates of 2,500 by the end of Q1 and 5,000 by the end of Q2. It is important to note that while these are the levels we are focused on hitting and we have plans in place to achieve them, our prior experience on the Model 3 ramp has demonstrated the difficulty of accurately forecasting specific production rates at specific points in time. What we can say with confidence is that we are taking many actions to systematically address bottlenecks and add capacity in places like the battery module line where we have experienced constraints, and these actions should result in our production rate significantly increasing during the rest of Q1 and through Q2.”

The update follows Tesla announced that it achieved a production rate in the last few days of 2017 that translates to “over 1,000 Model 3’s per week.” 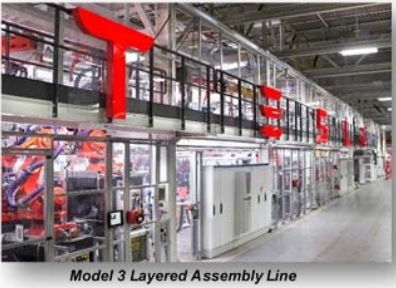 Tesla says that the Model 3 reservation backlog has been increasing recently:

“In recent weeks, they have continued to grow as Model 3 has arrived in select Tesla stores and received numerous positive reviews, including Automobile Magazine’s 2018 Design of the Year award. We want to thank both our Model 3 suppliers and our customers, who have continued to be such great partners and advocates, while patiently waiting as the ramp continues to accelerate.”

In its new earnings report, Tesla’s customer deposits have increased $853 million and the company is getting ~$1,000 per Model 3 reservation. Though the total amount also includes deposits for the new Roadster, Tesla Semi, and deposits for Model S and Model X vehicles ahead of deliveries.

It increased by about $170 million quarter-over-quarter.

In recent weeks, Tesla started deliveries on the East Coast, updated the Model 3 design studio, and made it available beyond first-day reservation holders.