We are getting more evidence that Tesla is getting closer to expand Model 3 options to include its dual motor all-wheel-drive powertrain.

As shown by the Model 3 vehicle identification number (VIN) decoder, the 8th digit represents the type of powertrain and the number 2 means a dual motor.

Last month, we reported on Tesla registering 19 Model 3 VINs with dual motor powertrain with NHTSA in the latest batch of new VINS.

Two dozen of those Model 3 VINs were registered with dual motor powertrain – adding to the previous batch:

As we previously reported, VINs are not an ideal way to monitor a production ramp within a small and accurate margin, but it’s a fairly representative way to figure out the general progress.

But it does seem to indicate that Tesla built two separate batches of dual motor Model 3 vehicles – presumably to test the production version.

We previously reported on Tesla testing Model 3 vehicles with dual motors during the prototype phase, but they are now likely testing them coming out of the production line.

Spring 2018 can mean anything from March to June so it could be coming quite fast. It makes sense since Tesla has been going for higher margin vehicles first with the Long Range battery pack and the dual motor option would be the next logical step in this strategy.

When we reported on the last batch, we asked our readers about how much they expect to pay for the feature, which used to be $5,000 for the Model S. 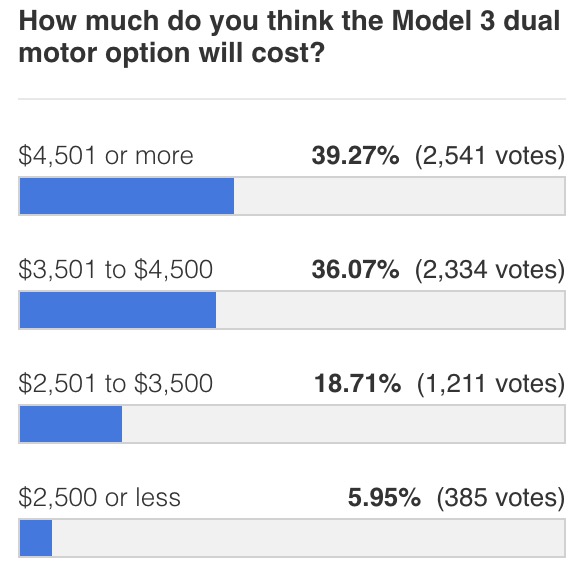 It looks like the majority expects to pay less than it was for Model S, but it could still be fairly close to $5,000 based on expectations.

I think that makes sense, but I would like a surprise at something closer to ~$3,000. The Model 3 is already nowhere near its promised $35,000 sticker price and if the dual motor is the next option coming before the base battery pack, the price range is only going higher.