As we reported earlier this week, the first official Tesla Model 3 display vehicles arrived at two of Tesla’s retail locations in Los Angeles and Palo Alto.

Since Friday, Tesla’s Stanford Mall in Palo Alto and its Century City Mall in Los Angeles became the company’s first two retail locations to have a Model 3 on display.

The automaker plans to gradually add Model 3 display cars to its locations around the US as it ramps up production and continues the rollout of its latest electric vehicle, but for now it’s the only two locations where Model 3 reservation holders or the general public can go see the Model 3 and sit in it.

Chuck Knapp was at the Century City store half an hour before opening time today and there were already a few dozen people waiting for the doors to open – pictured above.

The demand to see the vehicle is so high right now that Tesla has to limit people to 2 minutes with the vehicle.

Chuck came back later in the day and there were even more people waiting in line with a barrier setup:

Reddit user Krodri also stopped by and he told Electrek that he had to wait an hour and a half to get to the Model 3 display car.

That was the scene when he got there:

As for the Stanford Mall store in Palo Alto, it was pretty much the same situation.

Last night, there were quite a few people, but it was manageable – though there were enough people to make Tesla staff stay late to give everyone the opportunity to see the Model 3.

But things got crazier today and the store was mobbed by people wanting to see the Model 3:

We are not exactly talking about the level of impressive lines of people during the first day of Model 3 reservations in March 2016, but it’s still significant crowds – especially for a car.

Here are a few more pictures of the Model 3 display at the Century City store: 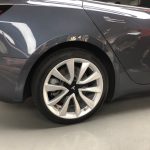 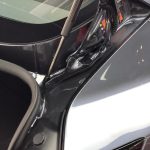