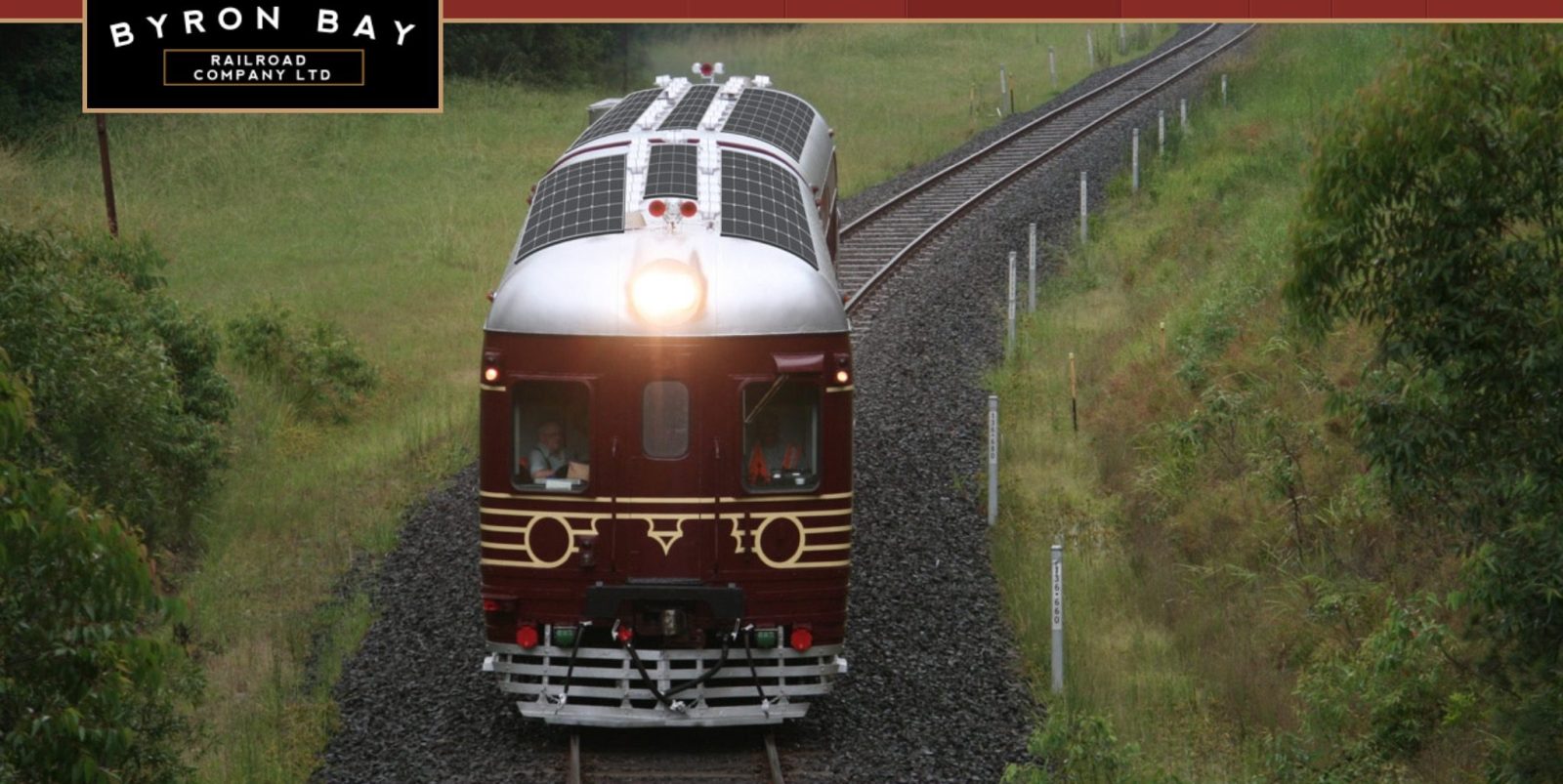 We “found a dilapidated train, restored it, and are powering it with a 4.6 billion year old power source” is how Jeremy Holmes, development director of the Byron Bay Railroad Company succinctly summarized the mission of the world’s first solar-powered train project.  The train, designed to be powered fully by solar panels and electric motors, goes into service this weekend, with a short 3km route near a resort in Byron Bay, New South Wales, Australia.

The railroad company has been set up as a nonprofit, and has partnered with several local companies including ELMOFO, a high-performance EV builder who made this awesome electric Radical SR8.

The train was retrofit from a classic passenger train which used to have two diesel engines.  One engine was replaced by electric motors and batteries, and the other engine was kept for balance and as an emergency backup.  It can and will run completely on solar power, even during times of extended cloud cover, but one diesel engine was kept around just in case there’s a failure.

It has a 77kWh battery which is good for a full day’s worth of trips back and forth, and will be charged both by panels on the roof of the train and a 30kW solar array at the station.

We’ve seen renewables-powered trains before, but most of them are electric trains attached to clean grids, as opposed to directly generating their own power.  Earlier this year the Netherlands announced that their electric trains are 100% wind powered, meeting their target a year earlier than planned.  And India has a “solar-powered train,” except in that case it’s still being pulled by a diesel locomotive and the solar panels only power comfort systems like air conditioning and lights.  This is the first train which we’re aware of which is actually fully powered by solar power, down to the wheels.

It’s 2017.  It’s the future.  Shouldn’t we have solar-powered transport by now?  People have been talking about solar-powered cars for a long time, but for various reasons they are not feasible.  Cars are big, heavy, often drive or are parked in shadow, start and stop a lot, have oddly-shaped roofs, and are otherwise not ideal places to put solar panels.  It’s possible to drive on sunshine if you plug your electric car into a house with solar panels on it, but we’re still some way off from direct solar drive on small passenger vehicles, if we’ll ever get there.  There’s only so much sun hitting every square foot of ground and there’s no way to change that.

But trains don’t have a lot of those problems, which makes it simpler to come up with a solution to make a solar train work within the bounds of physics and current technology.  Trains also stop at a station where it’s possible to put up large solar panels and to briefly charge batteries at each stop – as this one will do.

And this train, in particular, has quite a short route – 3km, or just under 2 miles – and will be traveling at low speeds to boot and only running once an hour when it first launches (with the possibility of adding more service if everything goes well).  At that rate, this is more of a novelty or a proof-of-concept than anything serious for passenger travel, but then again that’s to be expected of a “world’s first.”

And for a small beach community, a 2mile route could still prove useful.  It looks like this route will mostly serve a fancy beach resort, so the novelty of the activity will appeal to visitors and it could serve a function of reducing traffic, travel time or emissions from resort visitors shuttling themselves back and forth to the beach.  And it’s a fun idea, so why not?