The LA Auto Show has become a place for automakers to showcase their electric offerings.  There aren’t always that many brand-new concepts unveiled at LA, but production-intent electric vehicles are often front-and-center of automakers’ booths.  And given that California makes up 50% of US EV sales, and that most of those sales are in LA and the SF Bay Area, it’s the perfect spot to show off EVs.

But this year, in the sprawling urban environment of LA we saw a brand new, very different concept from a new Chinese firm called REDSPACE.  “REDSPACE” stands for “Revolutionary Electric Dream Space,” and they are an alliance between former BMW design chief Chris Bangle’s Italy-based design consultancy and a Chinese commercial manufacturer with a decidedly un-revolutionary name: “China Hi-Tech Group Corporation.”  It’s a ground-up reimagining of an efficient city vehicle for the modern age, and it certainly looks like it.

Bangle was involved at BMW from 1992-2009, having taken the last several years off from automotive design but recently resurfacing to critique “banality” in modern car design.  So it’s no wonder that this new design is…unique.

The REDS vehicle is intended as a “megacity vehicle,” designed for use in crowded, high-population areas around the world, but with particular focus on China (a country which has 15 cities with population of over 10 million).  Interestingly, the BMW i3 concept’s original name, unveiled not long after Chris Bangle left the firm in 2009, was “BMW MegaCity vehicle.”

REDS stands for “Revolutionary Electric Dream Space.”  The design was conceived from the ground up to fit into a small space, but to leverage that space as effectively as possible.  The concept is based on the idea that cars are moving for less than 10% of their life, so what can we do during the other 90%?   So the firm set out to design a multipurpose vehicle with the Chinese commuter in mind.

As a result, REDS takes up very little space – it’s about 20 inches shorter in length than a Fiat 500.  For anyone who has ever dealt with parking in a busy city center, this will certainly make a difference.

But despite that very small footprint, the car has space for four seats, and an additional fold-down seat without a seatbelt which can be used while the car is parked.

And about those seats – since the car is meant to be used while parked, the seats can swivel and move in place so that the space inside the car can be used in multiple ways.  The steering wheel can fold up and the driver’s seat can swivel around to turn into a social or meeting space, the front seats can slide or fold down so occupants can sit and relax in the rear seats with their feet up on the backs of the front seats, and various other configurations are possible.

Why would you want to sit in the back seats with your feet up?   The car has a 17-inch screen in the dash which can be extended when parked, to watch movies or play video games.  This is in addition to a smaller touchscreen in the dash used for vehicle and media controls. 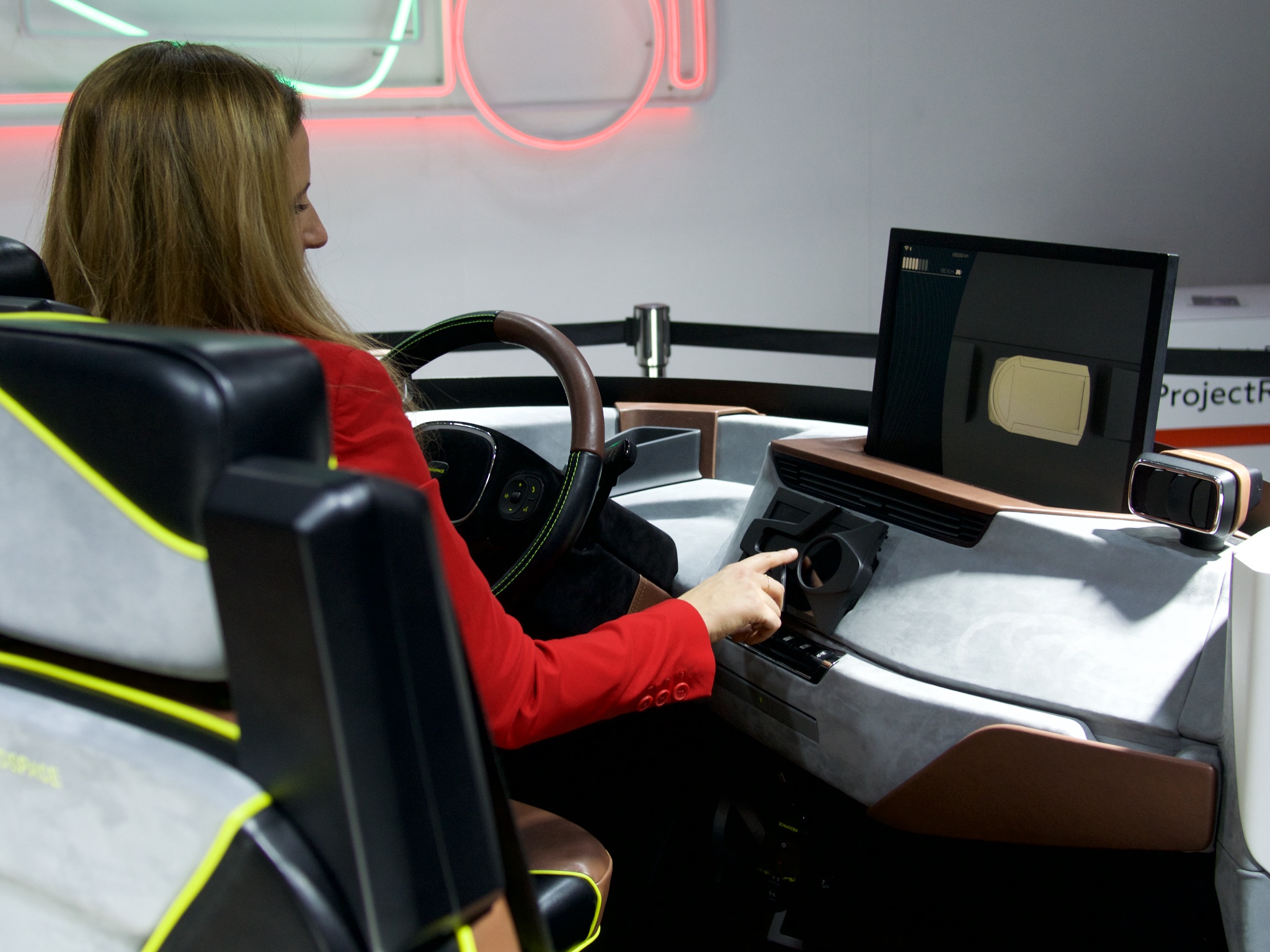 The smaller touchscreen is in a reasonably comfortable place for the driver to reach, but touchscreens typically suffer from the problem of having no tactile feedback, such that drivers need to take their eyes off the road in order interact with vehicle controls moreso than in the case of physical controls.  Redspace has approached this problem with plastic elements which slide over the face of the screen, so your fingers are guided to the portions of the screen used by common interface elements.  It looks a little strange on first use (but then again, what on this car doesn’t?), but I can see how it would be beneficial in terms of functionality.  Redspace claims that they are the first to incorporate an element like this into automotive touchscreens.

This is a common theme on this car – a “weird” design element which does turn out to have an interesting and unique purpose behind it, showing that the designers started with a completely clean slate this time around.

The windshield slopes forward, giving more visibility of the front of the car to aid in parking, shading the dash from the sun, and giving more room on the roof for solar panels.  The driver and passenger armrests slope upward instead of flat or downward, giving a more relaxed driving position.  The roof extends as the doors slide open, which makes for a wider door opening for easier ingress/egress and also covers the entrance somewhat so water doesn’t get into the car when it’s raining. 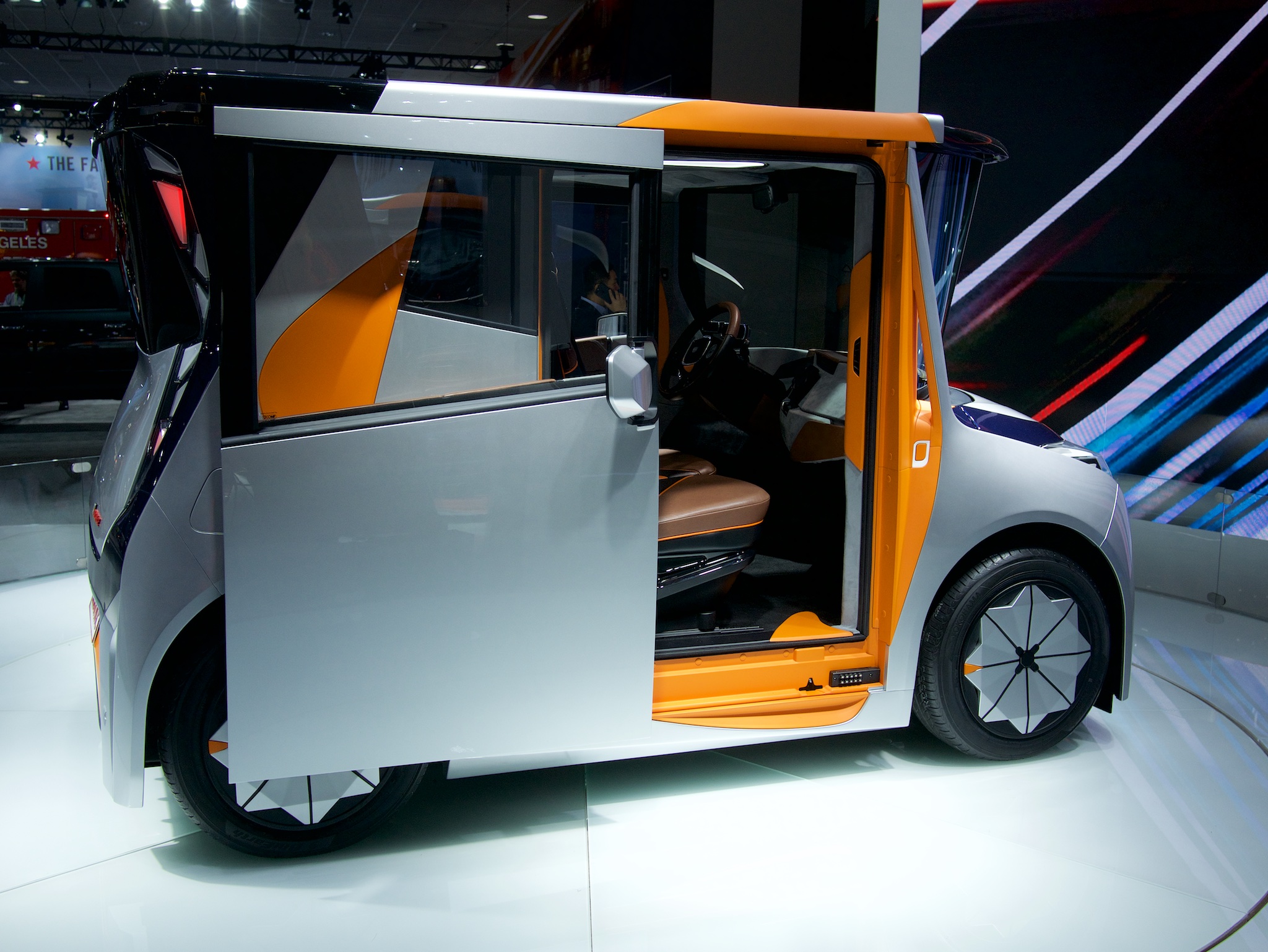 The car does not currently have self-driving capability, but Redspace is aware that the automotive industry is moving in that direction, and that concepts like this may become more popular in the future as a result.  Perhaps in another nod towards this future, the REDS is designed with inductive (wireless) charging in mind, which a future autonomous car could use to park in designated city-recharging spots without needing a human or robot to plug it in.

In the future, when cars eventually do not require the driver’s attention, it will be useful to have an interior which is functional in some way other than just sitting and staring forward at the world going by.  On a commute through city traffic, a young person can watch movies or play games, a businessperson can pull out a laptop and create an impromptu office, or a parent can change their child’s diapers.

And some may come to cherish the time they spend in their car.  In a megacity, there is often little opportunity to find private space.  A REDS vehicle may provide the rare opportunity to have some space of your own – not sharing your home with a large extended family (as is common in Eastern cultures), your office with your coworkers, or your social spaces with everyone else.  It may be a small car, but it’s your space, which you can use for yourself or with up to 4 others.

I mean, it’s got a lot of interesting new ideas, and it is certainly not “banal.”  But will it sell?  In Western markets, it seems like a rough sell.  On the one hand, this car’s target audience, city-dwellers, younger people, tend to be more willing to forego tradition and get something “weird” as long as it’s functional.  But there are so many “weird-mobile” electric concepts out there, and so few of them ever see the light of day, or get many sales if they do (I’m looking at you, i-MiEV).

Putting a lot of thought into the design and practicality of a car certainly counts for something, but at the end of the day you need to convince people to actually buy it, and people are often quite irrational with their car buying decisions, even moreso than other consumer goods.  After all, if people were perfectly rational about buying cars, everyone would be driving an EV already.

But luckily the Western market isn’t their primary target.  As a Westerner myself I cannot claim to understand the Chinese auto market, but it does seem like this car would be better-received there than here.

But as with every concept car, there’s a lot between where we are and where we want to be.  There are no specs available for the car, no pricing, no intended production date, no eventual sales targets.  There’s not even a press kit, or at least it hasn’t yet been emailed to me.

What they have is a partnership between a design house with some (very) interesting ideas run by a famous automotive designer and a Chinese commercial manufacturer.  They’ve got a (very) interesting concept car, and a target market that it seems to fit.  They’ve got an industry which is changing in so many ways, and which, to REDSPACE’s advantage, is largely populated by old-timers who produce “banal” designs and seem destined to take way too long to respond to the disruption of their industry which is already happening all around us.

Mix those all together and you’ve got a recipe for…something.  They may fold completely and never be heard from again, another marker added to the graveyard of the seemingly hundreds of concept cars we see each year.   They may make it to production, but with a much more “normal” car that debuts to a Chinese audience and does just fine but is otherwise ignored by the industry.  Or they may be the vanguard of the new automotive industry, leading the rethinking of the automobile which we’ve all thought was coming since the Edsel but nobody ever really knew quite how it would work out.

But at least for the next week or so, they’ll turn every head that walks through the back of the West Hall of the LA Auto Show.  That’s more than Audi can say, anyway.