Battery technology improvements are expected to soon enable electric flight and companies in the field are preparing their powertrain technology to support it.

In a major move toward that goal, Airbus, Rolls-Royce and Siemens have announced a new partnership to gradually convert a plane to electric propulsion.

The project they are collaborating on is the ‘E-Fan X’, a BAe 146 plane on which they are testing their electric motor technology.

During ground tests, they already replaced one of the four gas turbines by a two-megawatt electric motor.

“The E-Fan X is an important next step in our goal of making electric flight a reality in the foreseeable future. The lessons we learned from a long history of electric flight demonstrators, starting with the Cri-Cri, including the e-Genius, E-Star, and culminating most recently with the E-Fan 1.2, as well as the fruits of the E-Aircraft Systems House collaboration with Siemens, will pave the way to a hybrid single-aisle commercial aircraft that is safe, efficient, and cost-effective. We see hybrid-electric propulsion as a compelling technology for the future of aviation.”

Once they better test and understand the first electric motor, they will replace a gas turbine with another one and batteries will support takeoff and climbing.

Here are the roles of each member of the new partnership: 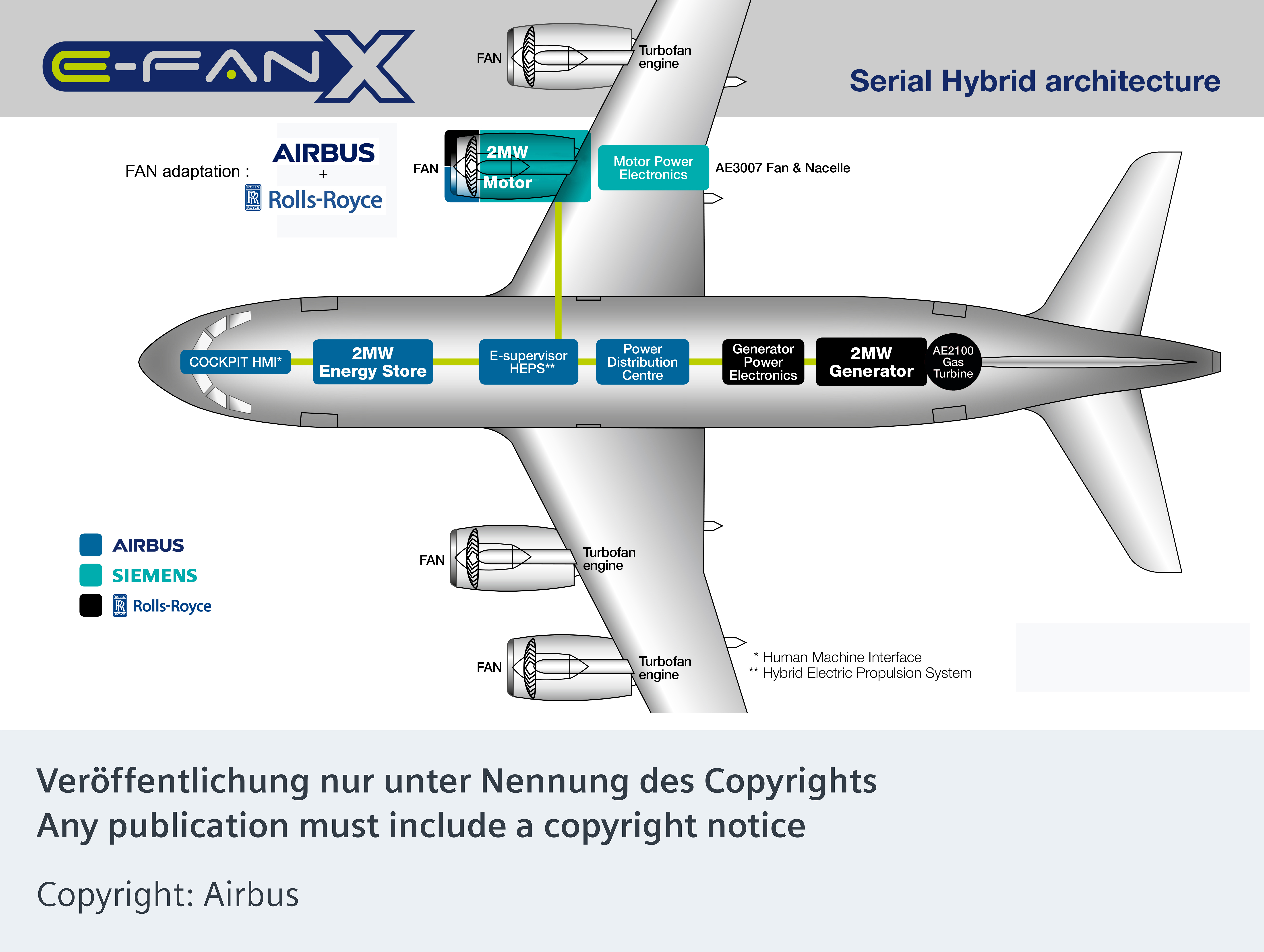 In the E-Fan X, the electric propulsion system obtains its power from a generator that is powered by a turbine in the fuselage. Take-off and climbing will be supported by lithium-ion batteries, each of which will have 700-kilowatts of power. As a flying testbed serves a BAe 146 regional plane with one of the aircraft’s four gas turbine engines replaced by a two megawatt electric motor from Siemens. The maiden flight is expected in 2020.<br />Any publication must include a copyright notice<br />Copyright: Airbus

In terms of commercial aircraft, this is likely the biggest electrification effort to date.

Both Siemens and Airbus have separately produced all-electric aircraft, but those were much smaller planes. Airbus’ E-Fan was the first electric plane to successfully fly across the English Channel and Siemens’ electric plane set new records for a top speed of 340 km/h (211 mph) and first electric aerotow.

But this new effort is for a larger commercial aircraft.

Those are not likely to go electric until some major improvements in energy density for batteries, but it looks like they are focusing on electric motors and controls to be ready when batteries do catch up.