Airbus accomplished an historic exploit last week when their E-Fan concept, a manned electric plane, crossed the English Channel to be the first battery powered plane to do so, 106 years after Louis Blériot made the first crossing with his monoplane. The 37 minute flight itself might not seem that impressive, but considering the current state of electric propulsion, it is a hopeful glimpse into the future of electric air transport.

Battery powered air travel is not currently commercially viable simply because the energy storage capacity of batteries has yet to compensate for their heavy weight. The E-Fan’s battery pack enables it to stay airborne for up to 50 minutes, but the twin-engine plane only weights 500 kg (1102 lb) when empty. The battery pack, located in the wings, represents 33% (167 kg) of the total weight.

The E-Fan uses lithium-Ion battery cells with an energy density of 207 Wh/kg. In comparison, the popular Model S, Tesla Motors’ full electric sedan, uses 233 Wh/kg battery cells. The battery industry observes an average improvement in energy density of about 7% every year, and as much as a 50% to 100% improvement will be needed to make commercial flight viable – meaning we might be able to fly on clean energy in a not-so-distant future.

In the meantime, Airbus shows us what they can do with current technologies and frankly, it is impressive. The crossing was 45 miles (74 km) long and the total energy capacity of the batteries was about 34.5 kWh. Another comparison to the Tesla Model S; the base version of the car can travel 240 miles (386 km) with a 70 kWh battery pack. Comparing electric ground transport to electric air transport is far from ideal, but with the later being almost nonexistent, I think it is a useful perspective to look at what we do know from available electric transport.

Here’s the technical data of the airplane: 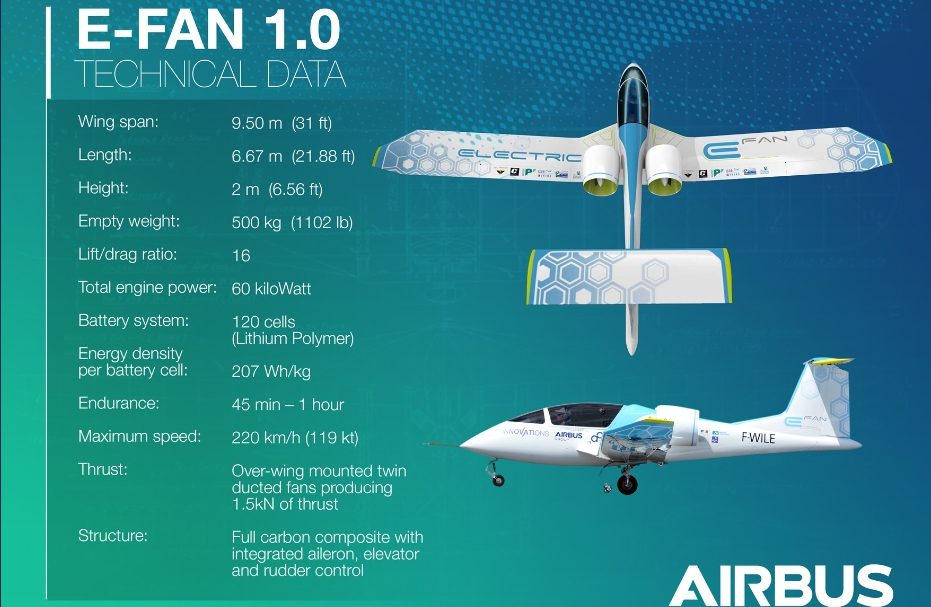