We have seen bits and pieces of Tesla’s Model 3 Owners Manual before, but it has now leaked in full just as Tesla finally opened up Model 3 orders to regular reservation holders.

Generally, Tesla makes its user manuals available online, but it hasn’t been the case for Model 3 yet.

A Redditor on /r/Teslamotors going by the username of pn02ner said that he called Tesla’s Roadside Assistance service earlier this month and that they ended up sending him the Model 3’s owners manual.

Note that the manual dates back from September 2017 and that Tesla could potentially update it before releasing it publicly.

It’s embedded in full below, but here are a few interesting tidbits.

Obviously, several sections are copy-pasted from Tesla’s Model S and Model X manuals since the vehicles share a lot of the same features. For example, Autopilot takes up a significant part of the manual.

But there are also several new aspects unique to the Model 3 in the manual.

One of the most interesting of those new features in terms of user interface is all the new controls associated with Tesla’s new bidirectional scroll buttons on the steering wheel:

The owner’s manual goes into details about the system, which I’m sure will be interesting for all the reservation holders who never had the chance to play with the Model 3 yet.

Also unique to the Model 3, Tesla also shows how to put on and remove the aero caps, which they apparently call ‘hub caps’: 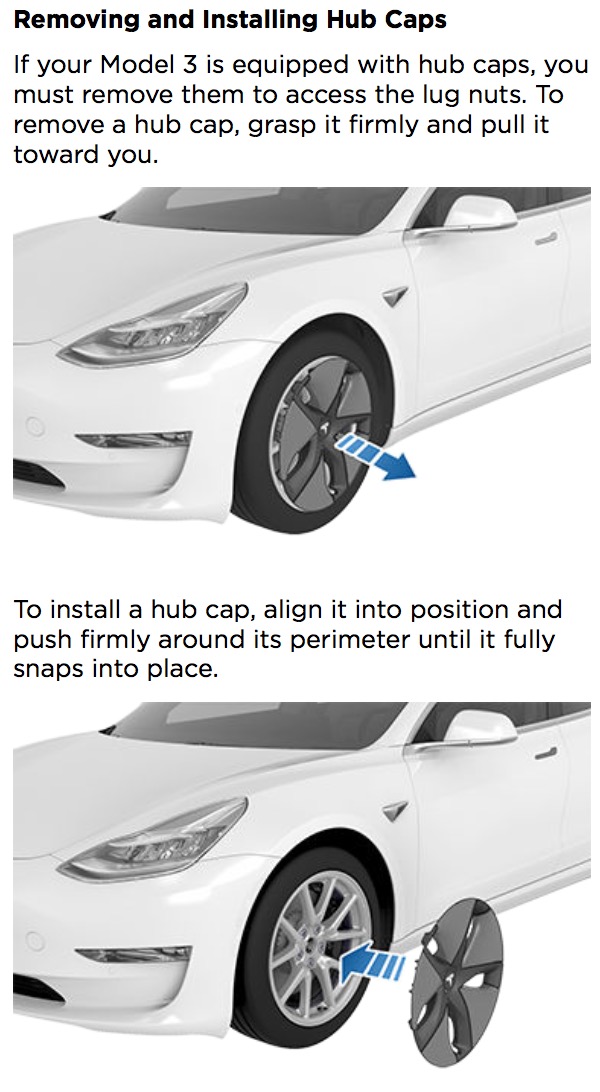 Other interesting tidbits include Tesla listing the peak power output of the motor at 165 kW and 3,700 Nm maximum wheel torque:

The manual also reiterates that the Model 3 doesn’t support towing, though it says that it “currently” can’t – possibly opening the door for future capability. Tesla CEO Elon Musk previously said that the Model 3 would allow towing.

You can find all this and many more details in the Model 3 owner’s manual embedded in full here: