Data is now confirming what most people likely suspected, that Tesla’s next-gen Roadster stole the show from the company’s electric truck at the new vehicle’s own launch event.

The event last week was about the Tesla Semi, the automaker’s new electric heavy-duty truck, and while they unveiled some impressive tech that had people excited, it was nothing compared to how the crowd went nuts when that new Roadster came out of the trailer.

Everyone around me started yelling out of excitement.

That excitement was also reflected outside of the hangar in the Hawthorne airport in Los Angeles. Just from my own feeds, it looked like the new electric sports car took a larger part of the media and social media coverage than the Tesla Semi.

While it would have been interesting to see where there’s more excitement for the new electric vehicles, it actually looks like the whole world got pretty excited about it based on the data.

More specifically in the US, they have looked at the chatters for Tesla on Twitter leading up to the event and the reactions after it based on the percentage of total geotagged tweets from each state: 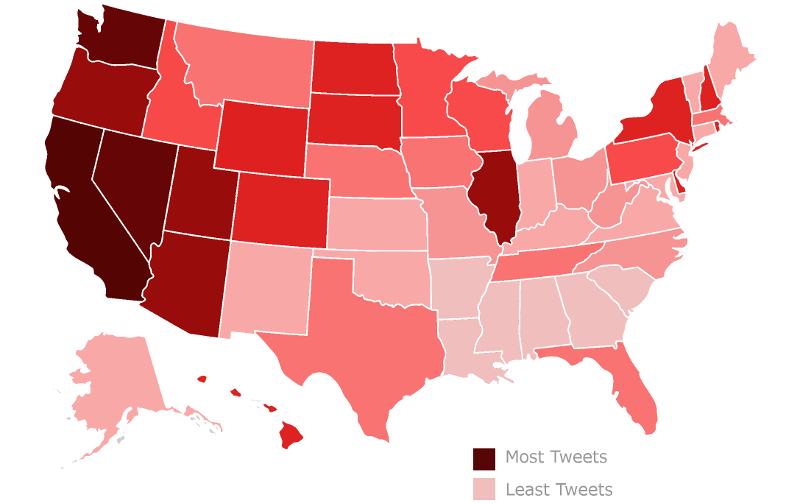 Surprisingly, they found out that as much as 5.2% of all geotagged tweets from California were about Tesla from October 18th to November 18th.

But it’s still interesting data considering the launch event was supposed to be about the Tesla Semi.

I think it was actually brilliant marketing for the trucks. While most of the coverage is about the Roadster because they announced that their prototype was beating all the specs records of production vehicles today, most of the coverage also made mention of the Tesla Semi.

At this point, I’d be surprised if not all the fleet operators in the world don’t at least know about the launch.