Tesla Semi met and then crushed almost all of our expectations 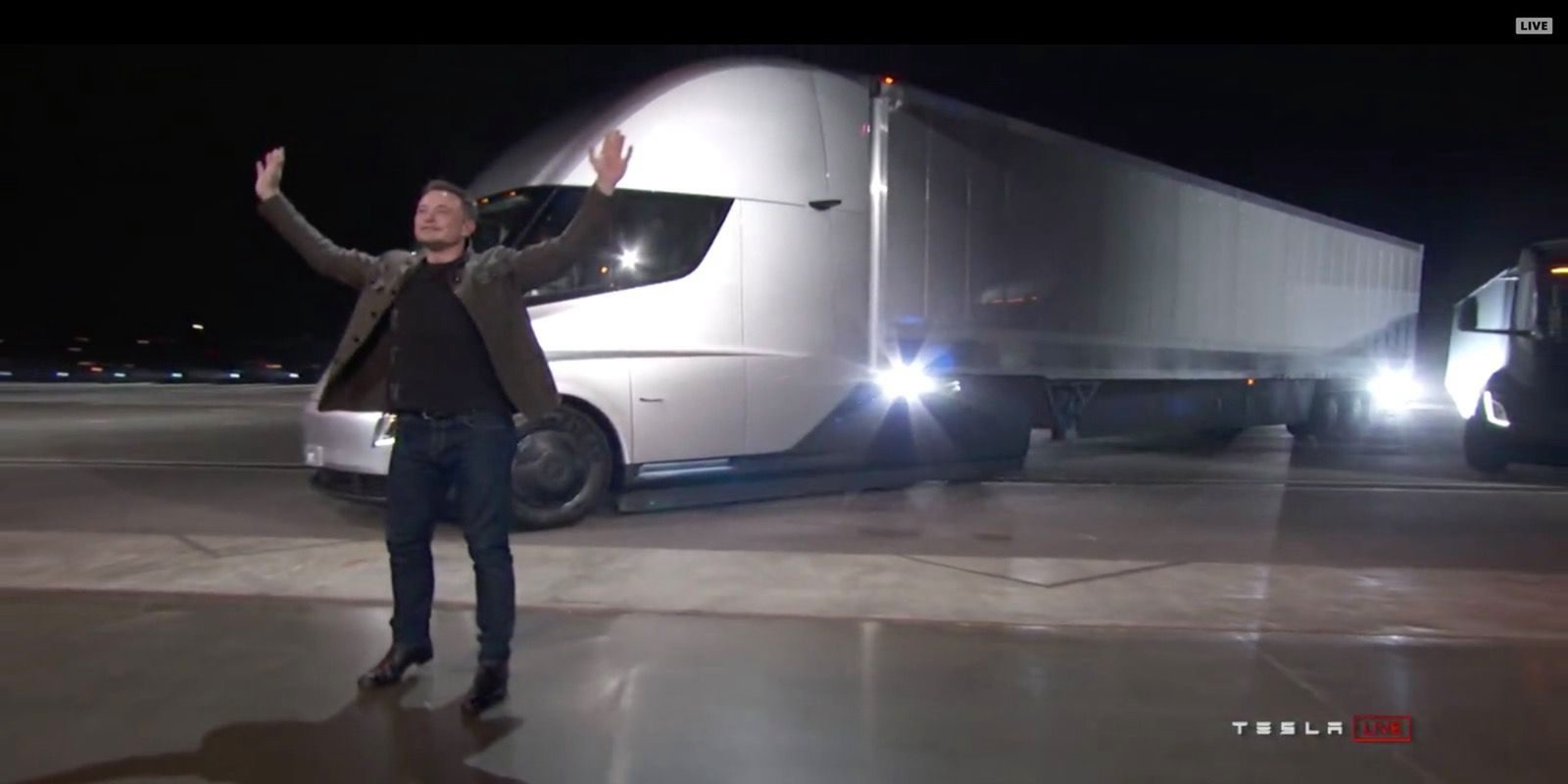 I’d argue that leading up to the event, CEO Elon Musk was hyping the Tesla electric truck unveiling even more than your average Tesla event, which led us to set some crazy high expectations for the truck.

Surprisingly, Tesla actually met most of our expectations and they even crushed a few of them. Here’s our quick recap of the event.

As usual, Tesla knows how to throw a nice party.

Of course, as usual, it was also late, but the company made sure to feed drinks to the few hundred attendees while we waited packed shoulder to shoulder in a hangar at the Hawthorne airport, where Tesla’s design studio is located.

The first surprise of the night came as soon as those two trucks drove down the tarmac in onto the stage. 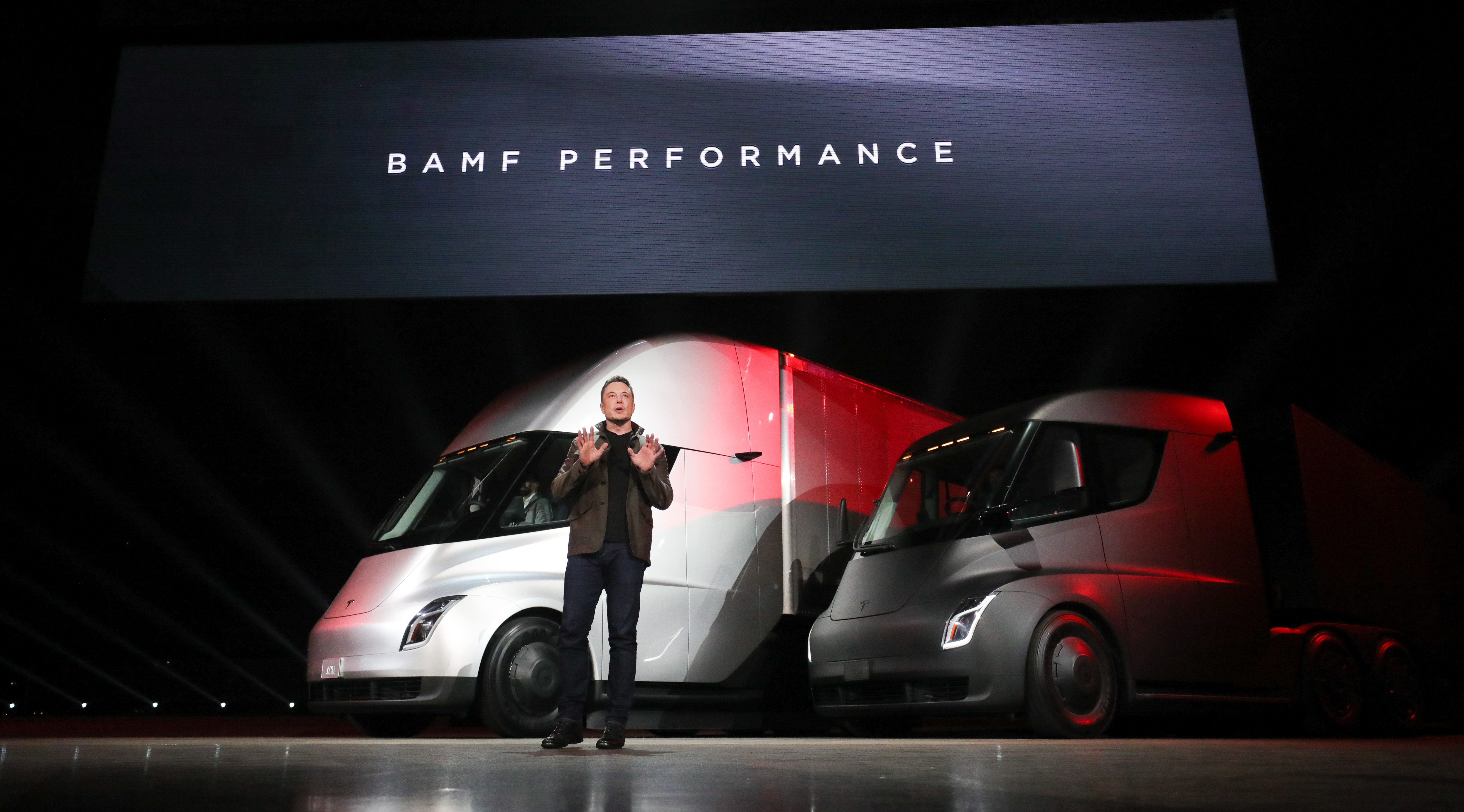 Musk then went into the truck’s performance, which he described as “BAMF”, which stands for “bad ass mother f**ker.”

The truck achieved a drag coefficient of 0.36, which is unprecedented for a truck and even beats several modern passenger cars.

He confirmed that it is equipped with 4 independent electric motors on rear axles – enabling insane torque for a 0 to 60 mph acceleration with a full load in 20 seconds.

That’s one of the specs that was right in line with our “mind-blowing expectations.” As for without a full load, we are talking about 5 seconds to reach the same speed.

The powertrain also enables another interesting performance spec: a speed of 65 mph going up a 5% grade.

That’s about 50% faster than your average truck, which is both good for travel time and to reduce traffic.

So far, we are talking about Tesla meeting our insanely high expectations, but when it comes to range, they crushed it.

Musk announced two different battery pack configurations for 300 and 500 miles of range on a single charge. While a 300-mile range was within our expectations, a 500-mile range is definitely something else and should easily enable long-distance routes. And that’s with a full load:

Tesla didn’t want to release the battery pack specs in those trucks to enable this kind of range, but we can deduct a rough capacity of 1,000 kWh if we take Tesla’s “<2 kWh per mile” of energy consumption times 500 miles of range at highway speed.

That’s definitely way bigger than we anticipated and almost rises to a battery breakthrough level.

Musk also briefly mentions some semi-autonomous driving capacity – though he made sure not to mention anything about the possibility of fully self-driving capacity, which would be sure to upset a lot of truck drivers.

Instead, Musk announced that the Tesla Semi will come standard with ‘Enhanced Autopilot Features’ and that it will be able to create semi-automated convoys.

The last important spec that Musk announced at the event was the charging capacity of the truck.

Now the long-awaited Supercharger V3 announcement was part of our expectations and we hinted at a ‘Megacharger’, which Tesla now confirmed is the new name of the charging stations, but the actual charging rate has simply blown our minds and crushed our expectations.

Musk talked about the new megachargers adding 400 miles of range on the Tesla Semi in just 30 minutes. Using the same metrics released by Tesla for energy consumption, it would translate into roughly 1.6 MW charging or about more than 10 times more powerful than Tesla’s current Superchargers.

They apparently look the same too:

After that, Musk moved into what fleet operators actually want to know: the economics of those trucks. After all, freight transport is a business and no matter how cool the truck looks and how insane the specs are, they want to know what kind of economics those specs enable.

Unfortunately, Tesla didn’t announce the price tag of the truck and instead, the company appears to have included the price into the cost of operation.

Here it is (without and with convoy enabled):

It’s hard to say without a comprehensive breakdown on those numbers, but it seems to be roughly in line with our expectations or even beating our expectations when talking about the convoy cost of operations.

It is certainly good enough for plenty of fleet operators. Dozens of them were at the event and they had already placed reservations for the truck with a $5,000 deposit per truck, which is not expected to hit the market until 2019.

What do you guys think? Are we alone in having our minds blowns by those specs? Let us know in the comment section below.