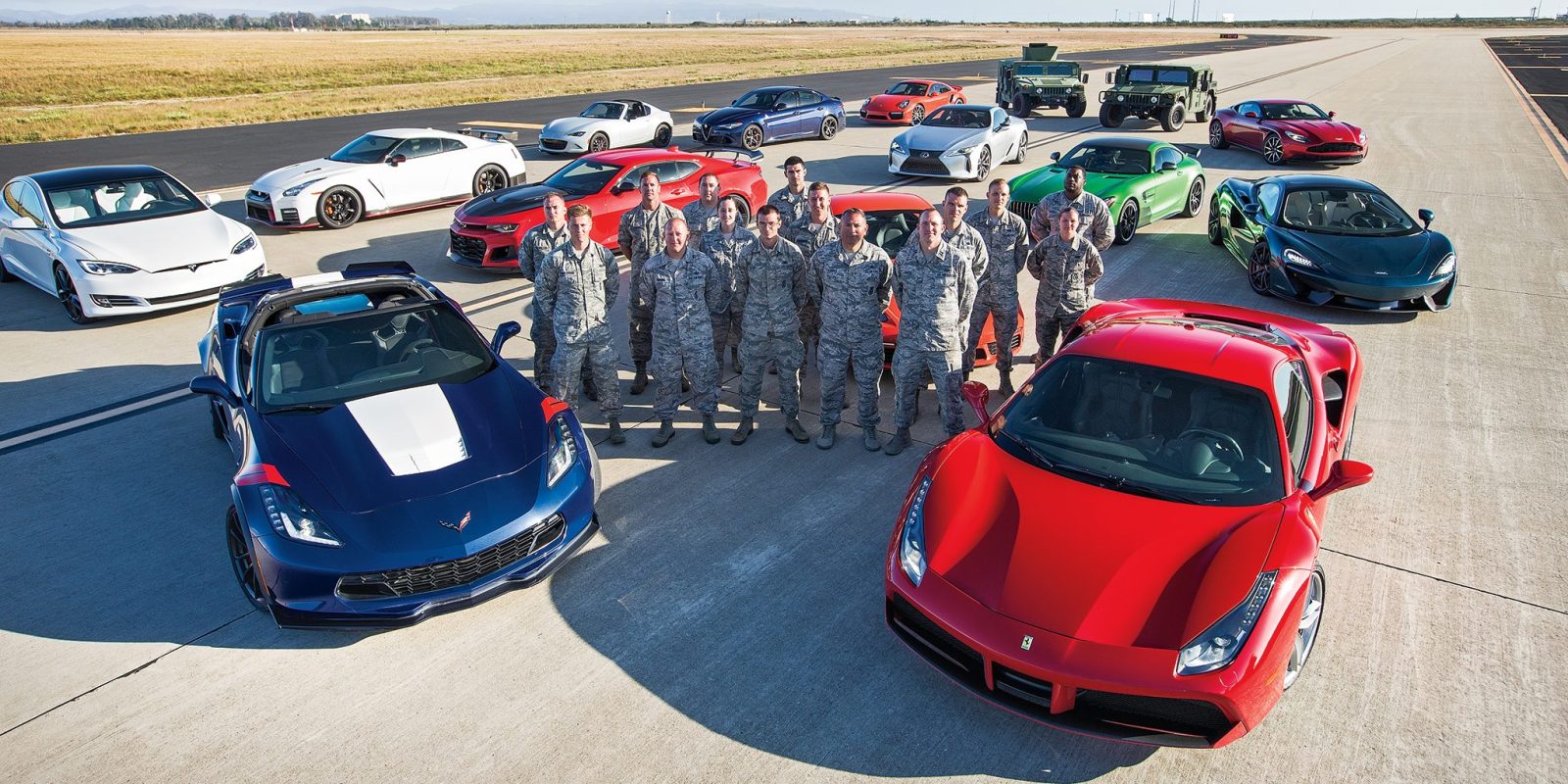 Each year, Motor Trend gives out the title of “best driver’s car” to a sportscar which is the most fun to drive, but which is perhaps impractical for everyday purposes.  As part of this “best driver’s car” competition, for the last 7 years they’ve taken this group of the most exciting sportscars in the world to race in what they’ve called the “world’s greatest drag race” – all 12 finalists doing a simultaneous quarter mile race against each other on an airstrip – this time at Vandenberg Air Force Base in California.  It’s always quite something to see.

The only problem is, for the last several years, there has been one great quarter mile car conspicuously absent from their test: the Tesla Model S.  Since the Model S is particularly practical – 5 (or 7) seats, lots of cargo space, efficient, quiet, comfortable – and isn’t really made for racing on a track, it doesn’t quite fit Motor Trend’s restrictive definition of a “driver’s car.”  But one car in the competition, the Mazda MX-5 RF, despite being a great driver’s car, is a little underpowered compared to the rest.  So Motor Trend decided to substitute a Tesla Model S P100D Ludicrous in its place for the drag race, since, let’s be honest, that’s the car we all wanted to see in the drag race anyway.  And you’ll never guess what happened next…

Nevermind, of course you can guess what happened next.  Yes, the Model S won.  No surprise.  In a competition against some of the fastest fire-breathing sportscars available today, Tesla rose to the top, with 11 roaring engines lagging behind as it drove off imperiously in silence.

Motor Trend notes that the Ferrari and Porsche were hot on the heels of the Model S, which is understandable given their lighter weight and higher top speed.  Both lost by about a tenth of a second but finished the quarter mile at a higher speed, which means they would have overtaken the Tesla eventually.  But races go to the finish line, not to some arbitrary point past the finish line, and in this race the Tesla hit the line first.

Notably there were no million-dollar hypercars at this test, as the “best driver’s car” test is meant to include cars which are widely available – not necessarily affordable, but at least not limited to small production runs which are sold out before they’re even delivered.  So no Porsche 918, no McLaren P1, no LaFerrari.  But the list of cars represented is still full of exotic supercars which are well out of reach of the average consumer, with a total sale price among the 12 of them of $1.9 million.  The list of competitors went thusly:

With the Mazda MX-5 RF looking on and wishing the track was a little twistier.

It’s understandable that the Tesla doesn’t have a berth in the “driver’s car” showdown, as the other cars aren’t just “not meant to be practical” but almost “meant to be impractical.”  They’re generally smaller, lighter, have two doors (except for the Alfa), they’re hard to fit in for large people, the back seats are either nonexistent or cramped, there may not be a trunk, and many of them cost much more than the average person would feel comfortable spending on something to get them to work and back.  Whereas the Model S, as Motor Trend describes it in the video, is a “four door, 5 passenger family sedan.”

That said, the Model S is still a good “driver’s car” in many respects – it has great handling for a car of its size and weight due to the low center of gravity, and obviously better acceleration and throttle response than just about anything else in existence.  But it’s not a track car and Tesla has never meant it to be one.  Hopefully some time in the future we’ll get to see the next-gen Tesla Roadster in the “best driver’s car” competition proper.  For now, it’s good that Motor Trend found a way to include the true king of the quarter mile in their drag race (a title which they mention the Nissan GT-R has “long been considered” as having – that car has won many instances of their “greatest drag race” before).

See Motor Trend’s article about the race, or watch the full video below: