Tesla is launching a new “Home Charging Installation Program” for its customers in order to simplify the logistics around the electric car buying process.

The service is currently only offered in a few markets in North America.

Until today, Tesla buyers had to arrange their own home charging situation, which can range from virtually nothing by just using Tesla’s included mobile connector and a regular 110-volt plug to a full wall connector installation.

They had to reach out to local electricians, get quotes, and time their installation to hopefully match the delivery of their new Tesla vehicle.

But now we receive reports of Tesla offering to take care of the home charging installation directly from the ordering process of a new vehicle.

Several potential buyers reached out to us after seeing the option appear in the online configurator of the Model S and Model X on Tesla’s website: 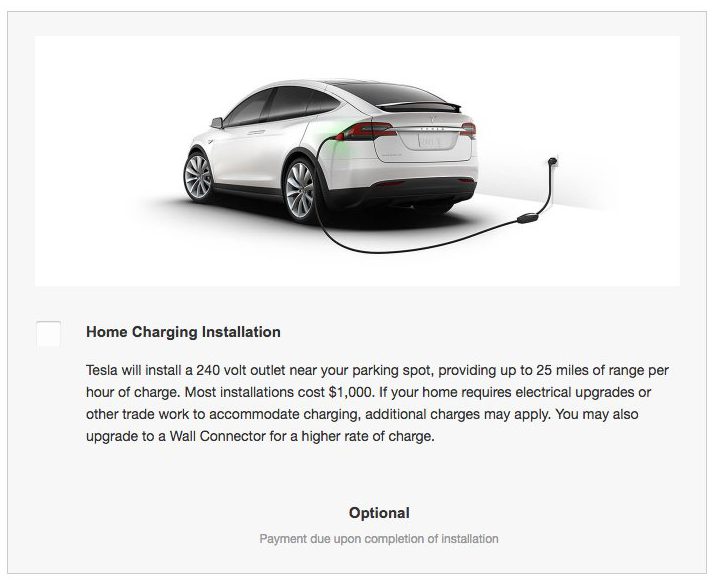 Tesla confirmed to Electrek that they started offering the service in “a few key markets” in North America, which explains why not everyone is seeing the option on the online configurator.

After the acquisition of SolarCity last year, Tesla CEO Elon Musk said that they plan to create a one-stop-shop where customers can buy a solar energy system, a Powerwall, an electric car, and a home charger, all at one place and have everything installed by a single team.

While they don’t seem to be quite there yet, it looks like the first step in this direction with Tesla taking over the logistics of installing home charging solutions.

With this said, the $1,000 price referenced in the configurator seems to be high. If it’s only the installation of a 240-volt outlet, most quotes that I have seen were about half that, but it of course depends on the wiring where you are installing it. As for the installation of a Wall Connector, the actual installation shouldn’t be much more expensive, unless you want to full 72A capacity. In this case, it can go up in price quite a bit.