VW is working with Kuka on robots to charge electric cars 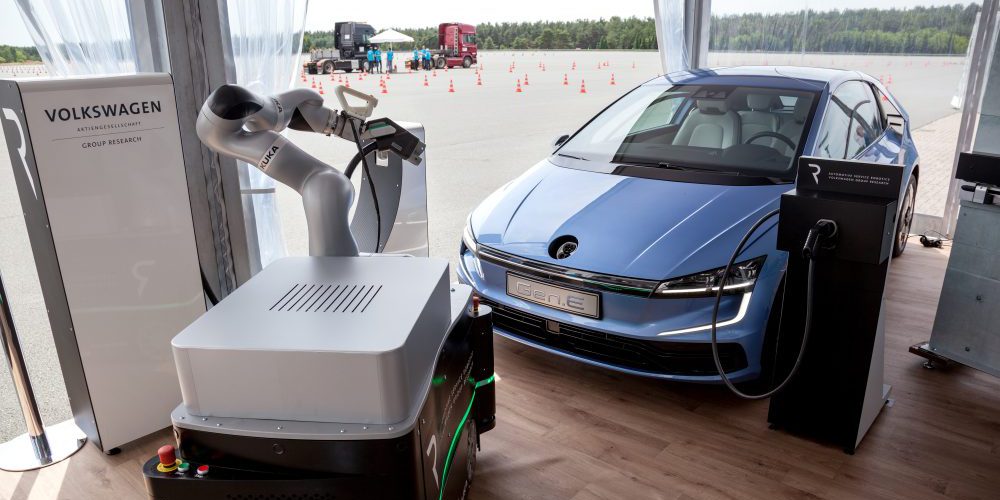 The latter seemed to only be a high-level research project, but now Volkswagen announced that it is working with robot manufacturer Kuka to make it a reality.

The new partnership goes beyond only the charging robot, but it is one part of their collaboration:

“The new cooperation links up with an existing joint research project looking into collaboration between human and robot. The e-smart Connect project includes a practical and user-friendly solution for charging high-voltage batteries of electric vehicles produced by the Volkswagen Group. This involves a KUKA robot independently connecting up the vehicle with a charging station in a specially developed application. The driver simply has to position the electrically powered automobile in a designated parking space. The robot takes care of connecting up the charging cable for the driver.”

Eichhorn confirmed that the project is just as much about electric vehicles as it is about autonomous vehicles:

“Autonomous vehicles will contribute to making mobility safer, simpler and more convenient. This includes innovative services associated with the automobile. “Our aim is to use the new strategic partnership to develop other opportunities in this area.”

They want to automate all the actions required to operate a vehicle, like charging in this case.

“In future, robots will support humans in many routine tasks. And everyday life in future will be inconceivable without autonomous driving. We will work together on innovative concepts in order to shape this future.

Tesla is also working to automate the charging process in preparation for self-driving. They released a glimpse of their robot snake charger prototype a few years ago and a more recent patent showed a different technology that could also automate the process.

Volkswagen also said that “plans are being laid for the development of other concepts for innovative applications in the new strategic partnership.”

VW is trying to change its image since the Dieselgate scandal and it’s clearly betting on new technologies, like electric propulsion and autonomous driving, to make it happen.