While Tesla is definitely a for-profit company with responsibilities to its shareholders, its mission to accelerate the advent of sustainable energy is an altruistic one in many ways. If you think that’s just a front, this might convince you otherwise.

We recently learned some new information about Tesla’s Destination Charging program for businesses and it is even more generous than we originally thought.

As we already knew, the company supplies those chargers for free, officially 2 chargers, but we’ve heard of busy locations where Tesla supplied more, including covering the cost of the installation.

That’s a good deal for the property owners since it enables them to add value to their property while attracting more customers who will have to stop there for an extended period of time. Tesla takes applications online for those ‘Destination Charger’ locations, which recently reached over 5,000 total locations around the world.

In the US (this is not applicable in Europe and some other markets), those chargers feature a connector proprietary to Tesla and therefore, only Tesla vehicles can charge on them – unless they use a new somewhat controversial third-party adapter.

But we often see other universal J1772 level 2 chargers at the same locations where Tesla installed the Destination Chargers.

We assumed that the businesses decided to add chargers for other EVs, but we now learn that in some cases, it was actually Tesla’s idea. The company went out of its way to install chargers for other electric vehicles, technically competitors, in order to expand charging infrastructure.

Electrek has talked to several business owners with Destination Chargers and some of them revealed that Tesla suggested them to install a Clipper Creek Charger, along with the Tesla Wall Connector, at no additional cost.

Now Tesla’s vehicles can technically also charge on those chargers with an adapter, but they are really there for other EVs since any Tesla owner would prefer the Wall Connector, which is simpler and can often offer a higher charge rate. One possible, slightly less altruistic rationale is that Tesla is still trying to keep its Roadster owners, who can’t use the same charger as the Model S/X happy with compatible J1772 adapters.

The total cost of those installations can easily add up to several thousands of dollars after all the equipment and installation. Yet, Tesla doesn’t even have a formal contract with the business owners – only a letter of intent to confirm that the automaker will cover the cost of chargers and the installation, while the host will cover the electricity bill.

Here’s a copy of the letter of intent obtained by Electrek: 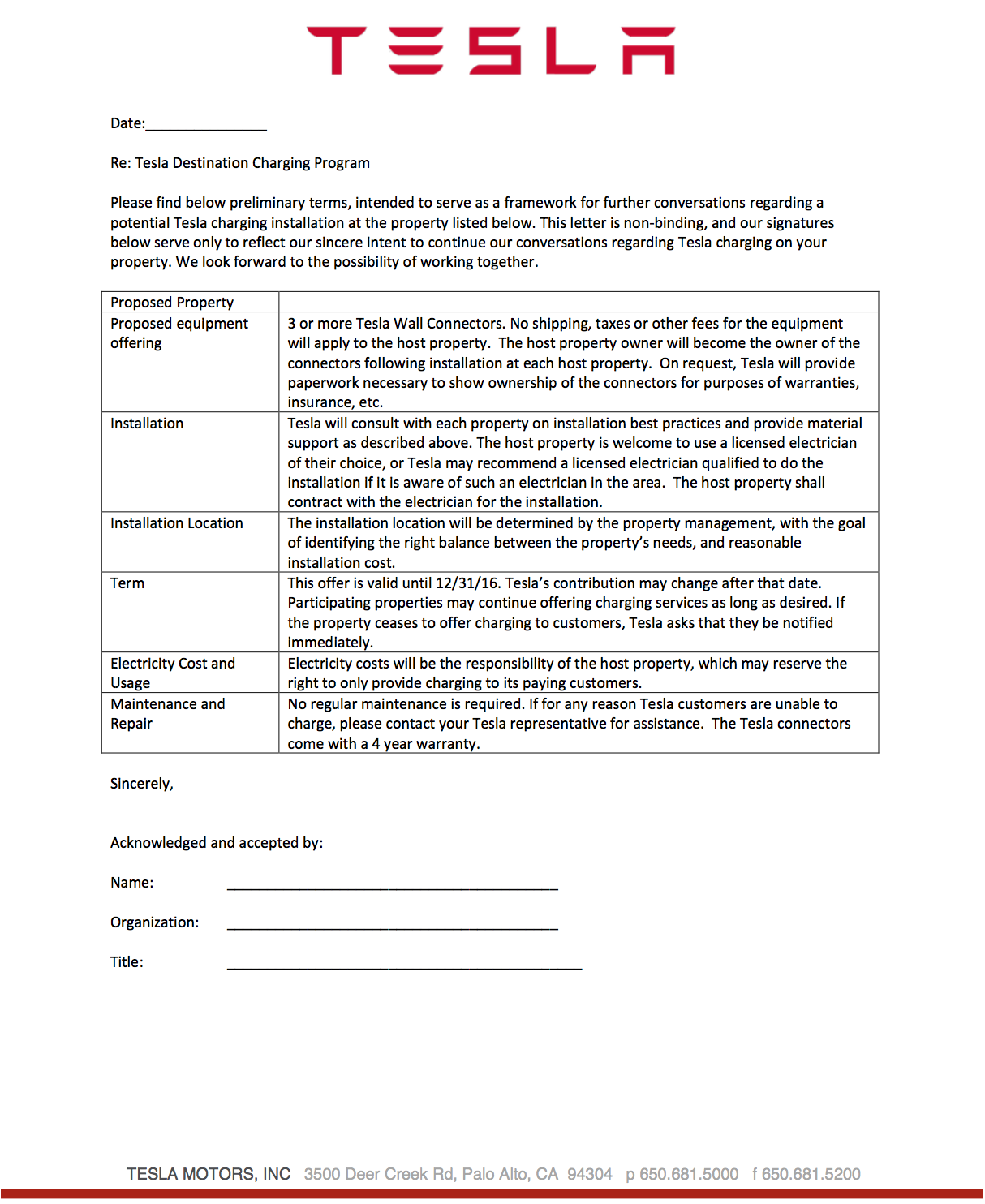 In a sense, other automakers have also helped financed charging infrastructure, but it was always part of a third-party pay-per-use charging network, like Nissan and BMW with EVgo.

Some business owners who applied were happy enough to get the Tesla chargers for free and they were quite surprised to be offered a universal charger on top of it. One of them told us:

“I have never heard of a company that acts the way Tesla does. They truly put their corporate money where their mouth is. And that’s remarkable and laudable.”

The Destination Charging network is apparently not the only way Tesla is planning to contribute to the broader EV charging infrastructure beyond its own fleet.

Earlier this month, Tesla CTO JB Straubel said that Tesla is ‘actively talking to other automakers’ about opening up its Supercharger network, which enables much faster charging than the Destination Charging network.