While the Tesla Model S grabbed much of the attention today with its redesign and a few new features, the automaker also quietly released a new ‘Tesla Wall Connector’ on its equipment website, which went virtually unnoticed.

The new charger is rated at up to 80 amps, just like the previous version, but it’s now significantly cheaper starting at $500 instead of $750, and it now features a “power sharing” function.

The Tesla Wall Connector is a hardwired charging station primarily used at home by Model S and X owners or through Tesla’s Destination Charging program.

The automaker says that the new Power sharing feature is an optimized solution for customers with multiple Tesla vehicles, which will be particularly useful now that Tesla is ramping up production of the Model X given that an important portion of the buyers were already Model S owners.

Power sharing feature that allows a single circuit breaker to be connected and shared, servicing up to 4 Wall Connectors – an optimized solution for customers with multiple Tesla vehicles. 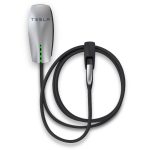 The new charger is now available with a 8.5′ or 24′ cable and can be configured in 13 different circuit breaker settings, from 15 amps to 100 amps. Many houses are now equipped with 100 amps circuit breakers.

When paired with a Model S equipped with a high amperage charger, it can charge the car at a rate of over 58 miles of range per hour.

Coincidentally (or likely not), Tesla is expected to soon launch its destination charging program in Europe – until now it was only available in the North America – which could mean that the European version could also have these new features.