While most of the attention around Tesla’s effort in the solar industry is currently focused on its new solar roof tiles, the company is still installing regular solar panels under SolarCity, which is currently transitioning to become ‘Tesla Solar’.

Earlier this year, Tesla unveiled its new ‘sleek and low-profile’ exclusive solar panel made by Panasonic.

The new panels are part of Tesla’s deal with Panasonic at the ‘Gigafactory 2’ in Buffalo. They will be manufactured by Panasonic at Tesla’s factory for Tesla’s exclusive use. They don’t plan to make them available to third-party installers or individuals.

As of now and since before the acquisition by Tesla, SolarCity, like most solar installers, used solar panels from several different suppliers for its residential and commercial projects, but that’s about to change.

Like the solar roof, the move is part of Elon Musk’s plan to offer solar products with better aesthetics in order to create a distinctive brand that can be differentiated from other installers on a product basis. He said when first announcing that they were working on such solar products:

“I think this is really a fundamental part of achieving differentiated product strategy.”

As part of this effort, Tesla is now advertising those new Tesla-branded panels in store in Washington (raina0624 on Instagram): 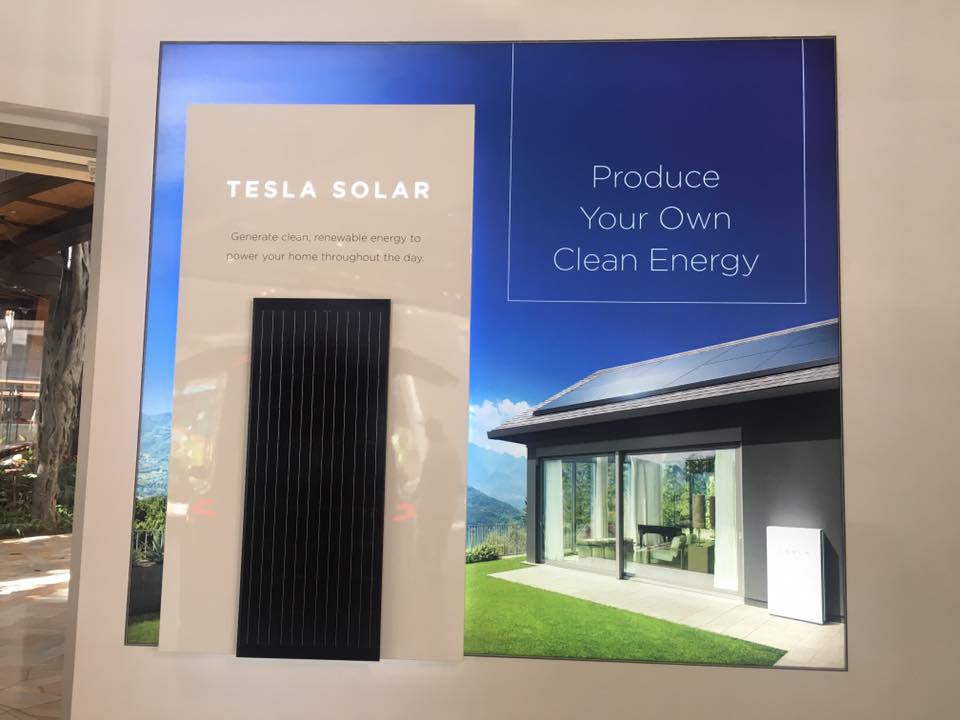 Last month, Tesla said that it conducted a succesful pilot program to start selling SolarCity’s services in its stores, which were previously only for its vehicles.

The program was reportedly so successful that they now plan to staff over 70 stores:

“We are working towards fully staffing more than 70 Tesla stores in the U.S. and abroad with dedicated Tesla energy sales people over the next two quarters.”

And now those stores are also starting to get ‘Tesla Solar’ panels as the company is discontinuing SolarCity’s brand in favor of its own.

We would also expect solar roof tile displays to start showing up in store soon as production is scheduled to start shortly. Though they are reportedly already sold out “well into 2018” so Tesla might not want to push the product just yet.