In the balmy Missouri heat of August 2012, surrounded by what must have been a record forty lithium battery powered EV conversions, I had the opportunity to meet Michael Bream from San Diego.  He hadn’t brought a car to this convention, just a Ziploc sandwich bag containing the remains of a shattered rear differential gear.  Openly unafraid to try new things with electric motors, Michael had partnered up with fellow gear-head Matt Hauber to form one of the coolest conversion shops, EVWest.  They were both convinced that switching from gasoline to electric power was simply the next logical step to meeting their performance goals.

Bream had been successful in the skateboarding market for the previous twenty years with his own business Gravity Skateboards which would eventually grow to incorporate Randal Truck Co., but had since become taken with automotive racing.  When tasked with building a better BMW race car for a friend, they realized that most racing regulations were simply too restrictive for their vision.  So they set out to find an event that would allow cars with electric drivetrains to participate.

The timing seemed all too perfect.  A racing series called EVCUP was just gearing up to host the first ever racing championship for electric vehicles.  The race would welcome a broad variety of electrics – from production EVs to purpose-built electric racers.  The event had gained publicity when high-profile drivers signed up, like former Top Gear “Stig” Ben Collins, British Parliamentary minister and businessman Paul Drayson and other well-known professional drivers.  Drayson’s “Westfield iRacer” was a ground-up build with a striking appearance that promised speeds of 115 mph and sub-five-second 0-60 mph times.

“The pace of [EV] development can be accelerated by racing them […] making them more credible and sexy.” – Lord Paul Drayson 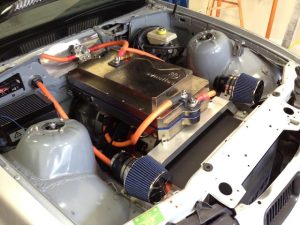 About two months before the first big race scheduled for Nov 26, 2011 in Laguna Seca, CA, EVCUP canceled all events reportedly due to car production delays.  Perhaps the writing was on the wall earlier in the year when both the Formulec World Series and the FIA Formula E Series announced intentions of electric racers reminiscent of Indy 500 cars capable of eclipsing EVCup with their 150 mph top speed and three-second 0-60 times.

The EVWest crew was left with one other option that actually had an all-electric class – the Pikes Peak International Hill Climb in Colorado.  Known for the 4720-ft vertical climb over a mere 12.4 miles of road, this must be some of the most arduous punishment ever dreamed up for an on-road vehicle.  The boys were seduced by the 96-year history of this second-oldest race in the US and welcomed the challenge of using only electrons for mobility.  EV advantages: 1. Abundant torque.  2. Not reliant on oxygen for combustion, whereas gas engines experience up to 20% loss in horsepower as they near the oxygen-starved, 14,000-ft finish line at the summit.  EV disadvantages: current fuel weight (the battery) is a whopping 115 times heavier than the equivalent energy in gasoline form!  Whaa?

The Bimmer needed to be completely rebuilt to satisfy the strict safety guidelines of the notoriously dangerous course.  Due to a 30-day brushfire delay the NASCAR driver they had previously arranged apparently had to bail.  So on race day, after their generator caught fire in the pits, with a skeleton crew of four friends and family and no driver oxygen, Michael would end up switching on the regulation 120-decibel siren for silent EVs and piloting the doped up M3 himself.  EVWest completed the 150-turn hillclimb in an unbelievable 11:58.929!  Here’s the official run and scarier in-car footage of a practice run.  First conversion ever to run, first in their class, fourth in the EV class!  It took 76 years of automotive evolution (1916-1992) for the gasoline car to achieve a twelve minute run.  Electrics are hot on the tail of the gasoline legacy, and just last year (2016) history was made when an electric car took first place overall – Rhys Millen’s 9:07.222 driving a purpose-built Oe PP3 with six electric motors delivering 1368 hp and 1593 lb-ft of torque at all four wheels.  Also it wasn’t until four years after EVWest’s achievement that Blake Fuller would challenge it with an 11:48 in a stripped down, race-ready Tesla P90D.  As of now, both gas and electric powered machines have achieved sub-nine-minute times at Pikes Peak. 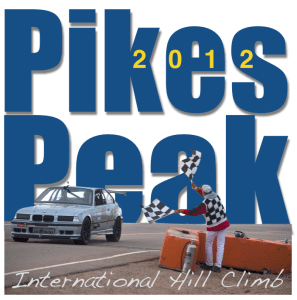 Word of their accomplishment at Pikes Peak traveled quickly and brought massive attention to the modest start-up.  Bream and Hauber wasted no time in applying a similar build approach in an off-road application.  Partnering with Strategic Recovery Institute they produced an insane, 125 mph, dirt-spewing beast for the SCORE Baja 1000 later that same year.  This time they would use a side-by-side motor configuration and hot-swappable battery packs to accomplish the ~1000-mile desert race. 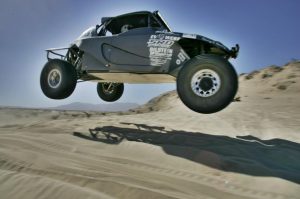 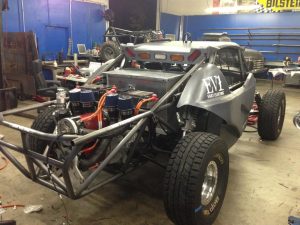 Speeding into uncharted territory does have its costs, according to Bream and his Ziploc exhibit A.  “Gobbling up drivetrain components” like differential gears, transmissions, high-end clutches and some battery-melting is par for taking the road less traveled.  EVWest has been doubling (and tripling!) up on motors since its inception and, more recently, has been leading the way in the incorporation of production EV batteries and motors into its builds – the next big move for conversions that more of us are now exploring.

Whether it’s Millen’s six motors or Tesla’s 7,104 cells, electric powertrains leave the door wide open for extreme modularity and thus endless exploration in the DIY world.  Stay tuned for the next in a series of articles about people of all types who discovered they possessed the resources and potential to build better cars than are otherwise available, thanks to domestically-produced electricity.