EV Conversion: a Lithium prescription for your car

While a growing segment of the population eagerly awaits the arrival of the affordable, long-range electric car, there exists a parallel universe.  A restive, grassroots movement of do-it-yourselfers who grew tired of waiting for the establishment to provide them with sustainable alternatives.  Decades ago.  Those who have seen the documentary Who Killed the Electric Car? understand that not all the reasons for this delay were natural or even market-driven.

For nearly forty-five years now, many folks have been discovering that, with a little guidance, they already possess the skills and resources to turn their gasoline-powered cars into roadworthy electric vehicles.  And in return they can expect to experience an astounding four to five-fold increase in efficiency, usually accompanied by a massive boost in acceleration, with these energy-sipping masters of torque.

These days, electric drivetrains are showing up in basically any machine that moves: cars, pickups, motorcycles, bikes, boats, ferries, riding mowers, buses, tractors, tractor trailers, dragsters, street legal racers…basically if it moves, you can likely find an EV drivetrain to replace it.

The fringe world of electric car conversion has largely fostered its own growth with the number of projects now totaling in the tens of thousands, thanks in part to the existence of the free and open Internet.  Dedicated bloggers have readily shared their real world experiences and hard-won lessons via detailed reports and videos, collectively building a great wealth of publicly available data.  When I began researching this topic, the vast majority of those I contacted responded quickly and willingly to inquiries for more information. 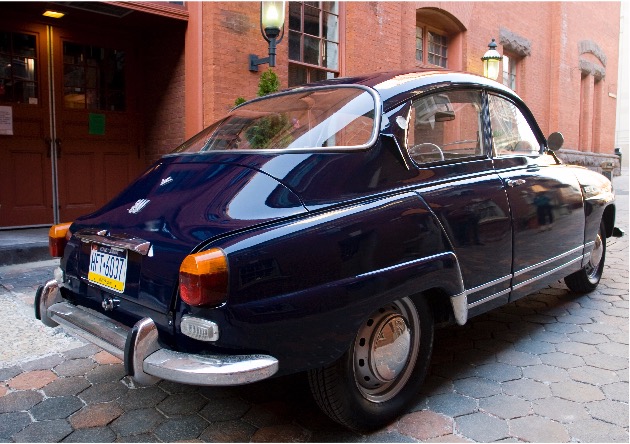 Inspired and empowered by such videos, I launched the website ampREVOLT.com.   Driven by deep disdain for US oil-based foreign policy and long term environmental concerns, I was intent on ditching gasoline and contributing my own conversion activities to the ‘database’.  Instrumental in accomplishing this monumental task was the enlistment of 30-year conversion expert Bob Batson of Electric Vehicles of America (EVA) and several local, talented tradesmen I would come to know.

Fate led me to my first refit candidate, a 1968 Saab 96 literally rotting in the weeds of my auto mechanic’s boneyard.  Ultimately I would purchase two of these cool classics for very cheap, due to faulty engines.  Working out of the two-car garage on the alley behind my house, on a musician’s budget, I started by genetically splicing the donor vehicles into a single healthy specimen.  Qualities that made this model attractive for electric conversion were: low curb weight, manual transmission, decent aerodynamics and its timeless charm.

The excitement was real.  Three months of working in a feverish frenzy in the dead of  winter produced the desired outcome.  With the help of one of EVA’s carefully planned conversion kits and a half a ton of deep-cycle, lead-acid batteries, I produced an electric car that could drive 50 or 60 miles per charge, or about 35 miles at highway speeds.

The bi-colored eSAAB proved both extremely fun and useful for three years and 8000 miles, even with the limited range, and earned itself a slick paint job and new interior.   The damage was done: I was completely sold on electric drive as a viable, accessible and sustainable form of propulsion.

Now the owner of an upgradable car, I replaced the lead-acid batteries with lithium-ion cells. Installing a higher voltage system and other more capable components allowed me to fully reap the benefits of the Li-ion chemistry — superior energy and power densities, better cycle life by an order of magnitude and a barely detectable self-discharge rate.

This profound upgrade effectively redefined the car, granting it double the performance and triple the range per charge.

Meanwhile, attention from the media and the public has been encouraging.  I always enjoy talking with people about the merits of electric drive, from the minimal maintenance and neck-aching torque, to the economics of driving for 2-3¢ per mile on domestic, ever more sustainably-produced electricity.  It’s the inevitable transportation solution for the foreseeable future, and with a retrofit, can assume virtually any shape you wish.

Over the coming weeks, I will cover some of these vehicles and I’d love to hear some recommendations and info from Electrek readers in the comments.