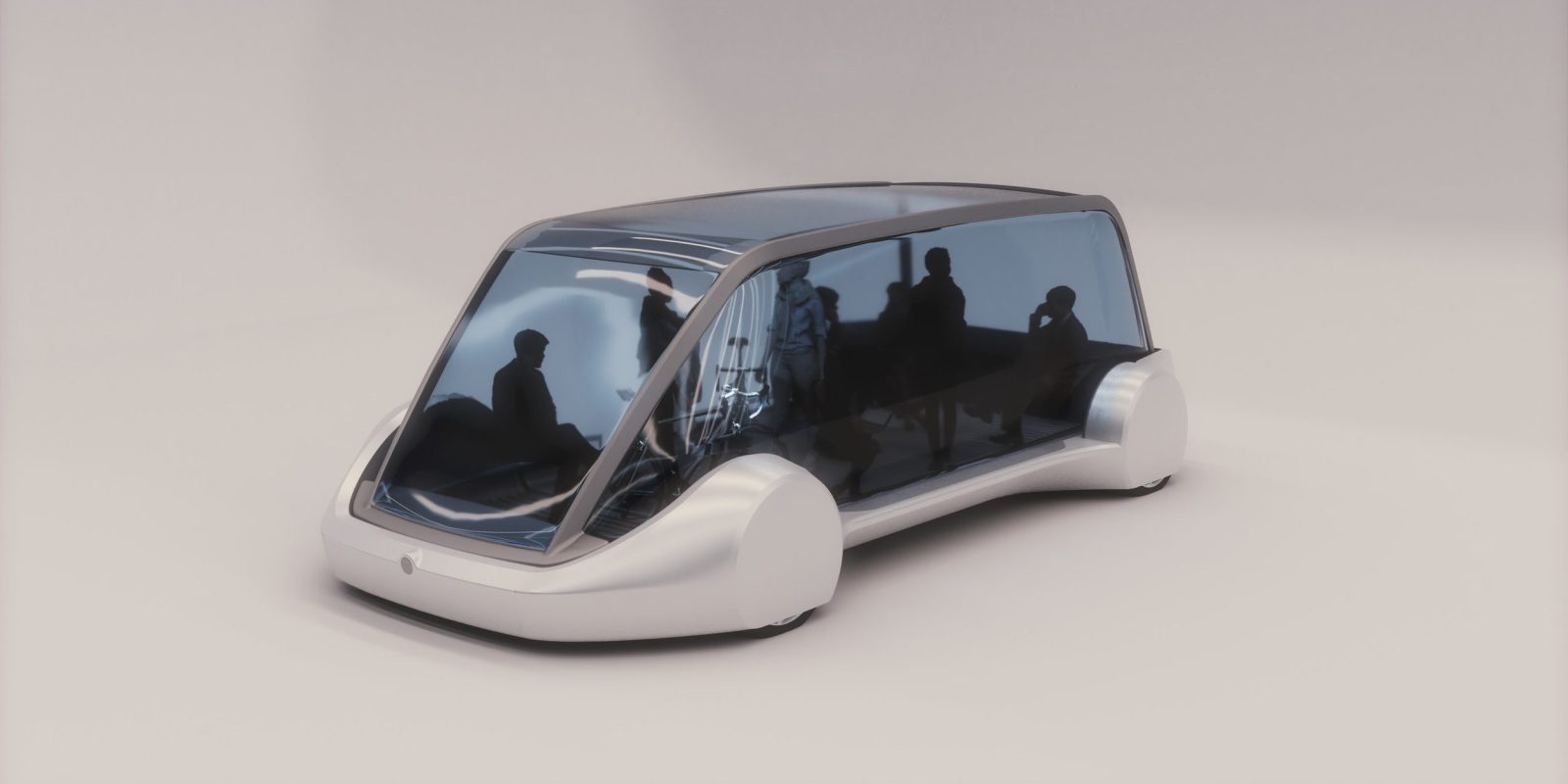 Last month, we learned that Elon Musk’s ‘Boring Company’ is not just about digging tunnels, but it will also electrify transport in the process by putting cars and passengers on “electric sleds”.

The company released this week new images of its electric sled concept for passengers that they plan to use in those tunnels.

The vehicle first appeared in the video of the unveiling of Musk’s vision for tunnels in cities.

There were two kinds of “electric sleds” in the video. One without anything on top but a platform in order for cars to park on it before it goes into the tunnels to connect to an electric railing that propels the vehicle.

The other vehicle had a passenger enclosure and unlike the other sled, it has wheels which mean it should be able to drive on the streets too.

We only saw a glimpse of it in the original video, but now the company released more renders of the concept (pictures via Boring Company):

Earlier this month, we learned that this new electric vehicle is not only just a possible application enabled by the Boring Company’s tunnels, but actually an important part of making the tunnels possible in the first place.

The company aims to reduce the cost of boring tunnels and one of their main ideas to achieve a significant cost reduction is to reduce the diameter – something they think will be possible by stabilizing the vehicles on sleds.

If the vehicle is locked on a rail instead of swerving between two lines, the tunnel’s diameter can be much smaller. Musk estimates that reducing the diameter alone will reduce tunneling costs by 3-4 times.

In a sense, it sounds like this vehicle could also replace Tesla’s planned electric minibus that Musk announced in Tesla’s product lineup last year.

The minibus was supposed to be built on the Model X chassis and feature Tesla’s latest autonomous features in order to enable a point-to-point public transport system, but Musk said earlier this month that he wasn’t so sure “if that’s actually going to be something that makes sense in the shared, fully autonomous environment.”

A higher density of passengers would help for traffic, but Musk thinks that the cost of a fully autonomous shared fleet would be so low that a bus, even if autonomous, wouldn’t be economically attractive anymore.

On the other hand, the same concept in tunnels would enable passengers to bypass traffic and achieve greater speeds since they think they can reach 125 mph on the electric rails.

The concept is actually similar to Hyperloop One’s idea to use pods that can both drive on the streets and enter their hyperloop tubes:

Speaking of the hyperloop, Musk believes that the Boring COmpany’s tunnels could also facilitate the deployment of hyperloop systems in densely populated areas.

A hyperloop tube and a tunnel with an electric railing are virtually the same aside from the pressure being reduced to near-vacuum in the hyperloop.