Update: the article has been updated to reflect the fact that while Musk’s and the Rive brothers’ solar bonds were discharged like everyone else’s, they were transferred to regular bonds under the same terms.

SolarCity launched a Solar Bond Program in 2014. It was presented as an interesting way for people to invest in solar with minimum cost requirements and without having to install panels on their roof. Elon Musk himself, his cousins and SolarCity co-founders Lyndon and Peter Rive, and Musk’s rocket company, SpaceX, ended up being the biggest buyers in the program.

Now we learn that Tesla is discharging most of its solar bonds ahead of the maturity date and paying back all the principal with interests for the life of the bonds – though not for Musk and his cousins.

At some point, SpaceX accumulated about $255 million worth of SolarCity’s solar bonds, but some have now already matured and others are still valid.

Instead, the bonds being discharged this week include a $124 million bond package of 6.5 percent bonds issued last year.

In this round, Musk disclosed that he personally bought $65 million of the bonds, and Lyndon Rive, SolarCity’s CEO and co-founder, and Peter Rive, CTO and co-founder, each bought $17.5 million.

In an email to bondholders, SolarCity wrote that they were discharging most of their remaining bonds early because of “financial restructuring” following the acquisition by Tesla:

“On November 21, 2016, SolarCity was acquired by Tesla. As part of the financial restructuring necessary to combine the two companies, certain outstanding series of Solar Bonds are being discharged in advance of the stated maturity date in accordance with the bond indenture.”

While every bondholder is being paid back early with interest, Tesla told Electrek that the solar bonds purchased by Musk and his cousins have been transferred to regular bonds under the same terms. Therefore, they are not getting their principal and interest early.

One of the investors sent us the message that SolarCity has been sending out yesterday after filling the discharge of the bonds: 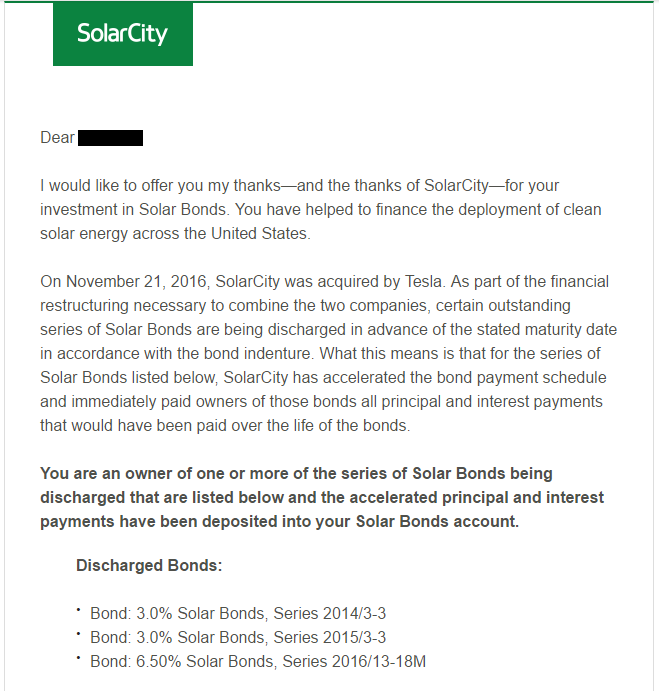 It comes just a month after Tesla closed $1.2 billion capital raise with $350 million in equity and $850 million in convertible notes.

As with most of Tesla’s capital raises, Musk participated in the stock offering and bought 95,420 shares for almost exactly $25 million.