Edmunds, the auto research firm, came up with a grim report titled “Elimination of federal tax credits likely to kill U.S. EV market”. They title says it all. They predict that electric vehicle sales in the US will crash when the main automakers making electric vehicles will run out of the federal credits.

They are mainly coming to this conclusion based on a case study of what happened to electric vehicle sales in Georgia after they ended their own state program for electric vehicles. At least, they are acknowledging that upcoming vehicles, like the Tesla Model 3, could still bring EVs to a wider audience without the tax credit.

They describe the state of the EV market in Georgia during the state program:

“The state of Georgia witnessed tremendous success with EV sales and boasted the second-highest EV sales rate in the U.S. behind California. In 2014, the state accounted for 17 percent of all EVs sold in the U.S. Driving these remarkable numbers was not just shoppers’ dedication to the environment but the state’s offer of a $5,000 tax credit for zero-emission vehicles, in addition to the $7,500 U.S. federal tax credit. These generous incentives could be applied to new vehicles purchased or leased, putting a big dent in the overall cost.”

And then what happened in July 2015 after they removed the incentive:

It looks pretty grim, but here’s the thing. When you break it down by electric car models, it tells a different story: 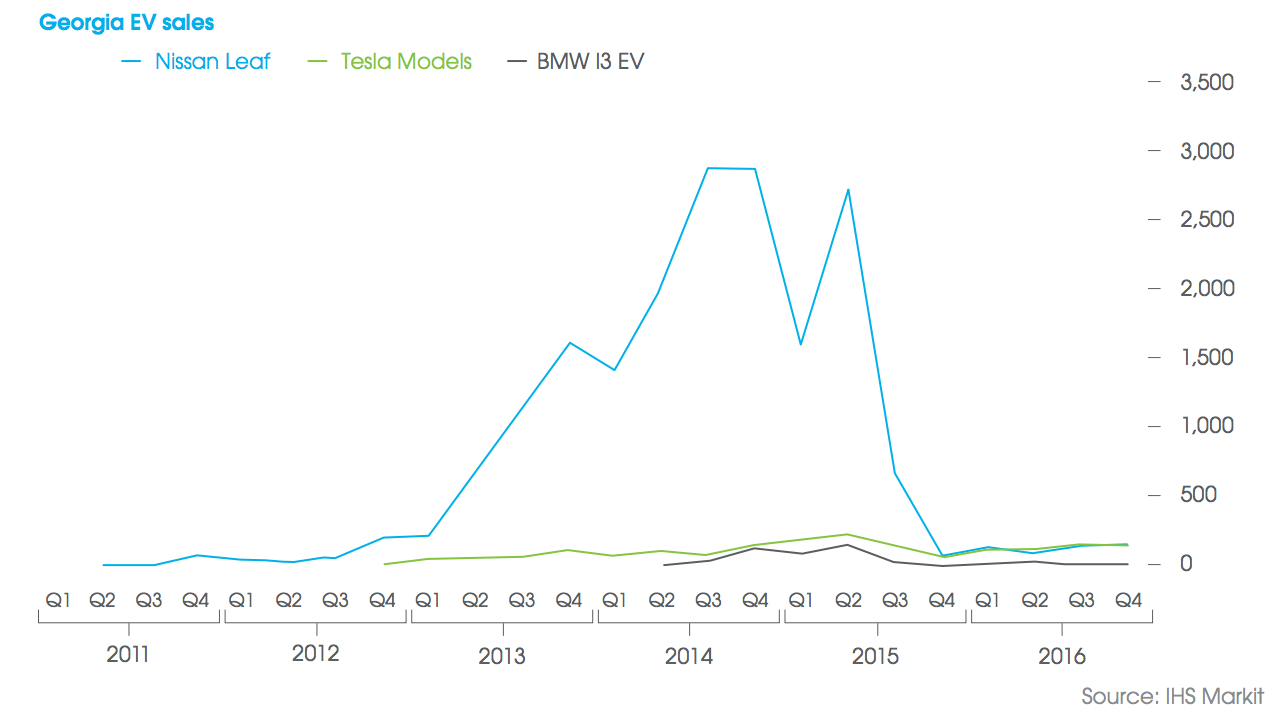 The Nissan Leaf represented the vast majority of the sales and while the Tesla Model S and BMW i3 were affected a little, it wasn’t significant.

As Edmunds mentioned, the incentive also applied to leases which enabled Nissan to create a $132 monthly lease for the Leaf. Over 80% of the Leafs that Nissan delivered in Georgia at the time were leased.

The Leaf falling to meet its unsustainable pace after the tax credit expiring is not exactly a good indicator going forward across the US, but that’s the bulk of Edmunds’ argument.

Overall, it seems like Edmunds takes a view similar to the Automaker Alliance:

“For EVs to achieve mainstream sales levels, better infrastructure is needed nationwide, along with the development of longerrange batteries.However, it’s hard for investments to be made without seeing consumer acceptance. So for the time being, government support for this technology is proving to be very important for the early stages on the market. Without government support, the onus will be on automakers to keep sales afloat — most likely with their own incentive programs and at a detriment to their bottom lines.”

Ultimately, electric vehicles that are competitive against gas-powered cars in term of price before gas savings are what’s needed for EVs to become mainstream. You have a vehicle like the VW e-Golf which starts at ~$30,000 and the same vehicle with an internal combustion engine is available on the same lot for ~$20,000. That’s the barrier for EV adoption.

Tesla’s Model S and X have been competitive against gas-powered cars in their respective segments, but the same thing needs to happen with the Model 3, which is more affordable.

Either way, we will know if they are right very quickly. Tesla crossed the 100,000 mark of electric vehicles delivered in US earlier this year – halfway to phase out of $7500 federal tax credit. If they stick to their production schedule for the Model 3, they should hit the 200,000 phase out mark by the end of the year.

The phase out is gradual, but Tesla could run out entirely sometime by the end of 2018 and at that point, we will see if sales can be sustainable without any tax credit. Wanna make a bet? Let us know what do you think in the comment section below.