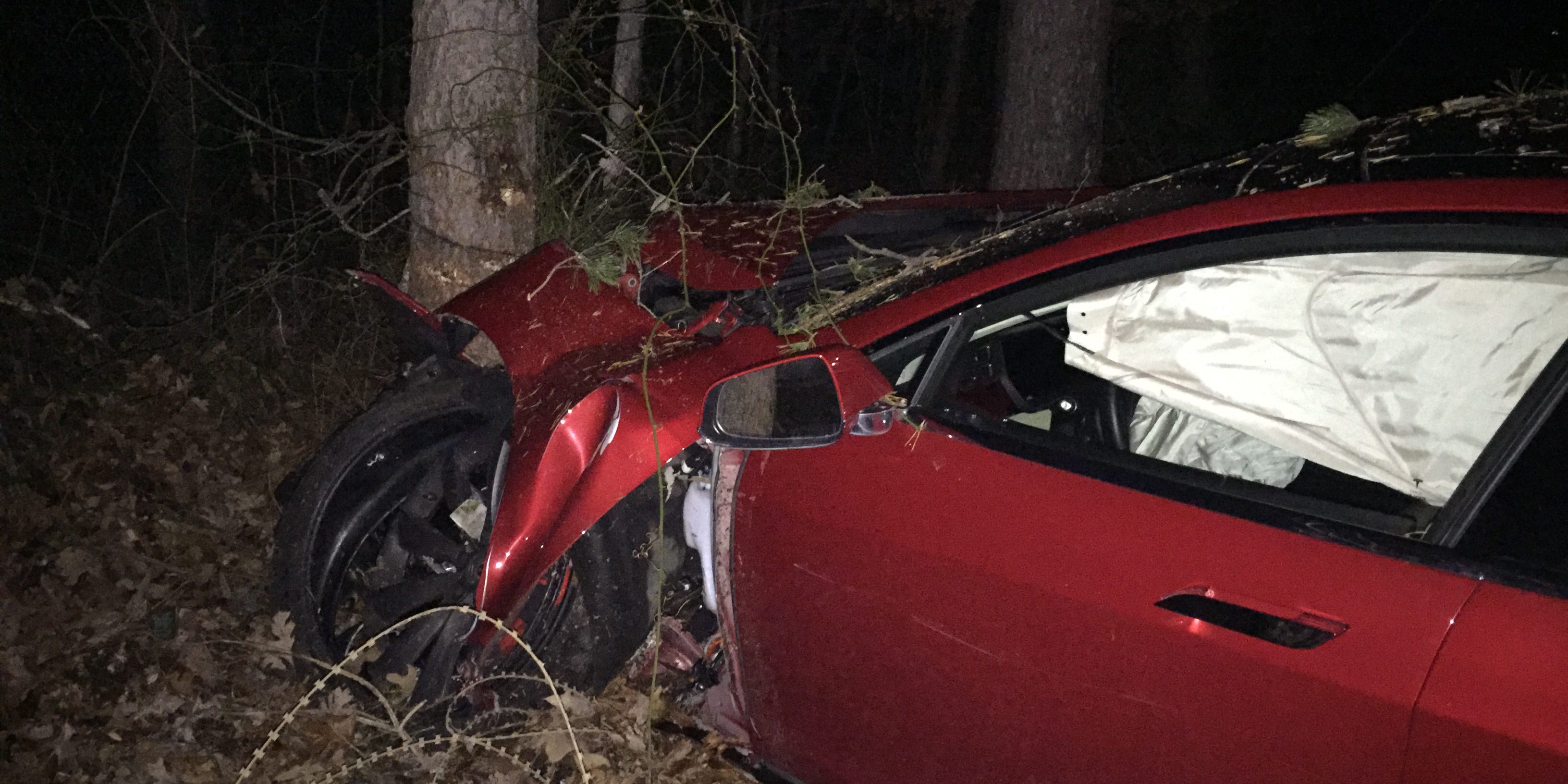 Electric vehicles have an obvious potential for saving lives. A recent study by the American Lung Association suggests that EVs could save thousands of lives per year in the US by reducing air pollution. But there’s also a less known design advantage of electric cars already saving lives today.

We’ve talked before about the lack of a large engine in the front being extremely useful in case of a frontal collision, especially in the Tesla Model S, and now we have yet another great example of it after a severe accident that happened in Virgina last night.

The driver of a Model S P85D, who prefers to remain anonymous, didn’t slow down before a turn on a small road near Quantico last night resulting in his Tesla flying off-road and into a tree, which he described as a “freak accident”. He told Electrek that he isn’t able to say exactly at what speed he hit the tree, but he estimates it at over 45 mph and below 75 mph.

Those kinds of accidents are obviously extremely dangerous since a tree of that size has strong roots and can stop even a 5,000-lb car in its tracks.

Sure enough, the Model S ended its off-road adventure right there and the front-end of the sedan was wrapped around the tree due to the force of the collision.

Despite the severity of the crash, the driver managed to get out by himself, called his insurance company and waited for a tow truck. When the truck arrived, he even felt well enough to help with picking up pieces of the car. He had scratches on his wrist and bruises on his chest, but otherwise completely uninjured.

He was urged to go the hospital this morning anyway just to verify that he was indeed OK, which x-rays confirmed. When showing pictures of the accident to people at the hospital, they couldn’t believe that he was in the car and still walking around like nothing happened – something he credited to the safety of his Tesla Model S.

“If it was any other automobile, the impact would have killed me. There are no solid objects under the hood of a Tesla that would’ve pushed into the car and into me. Also, I believe Tesla did a great job re-enforcing the front of the car to absorb the impact.”

He is referring to the large crumple zone located in the Tesla Model S’ front trunk (frunk), something easier to design with electric vehicles due to the lack of engines and the use of smaller motors. His particular Model S actually has a motor in the front since its a ‘P85D’, which is equipped with both a rear and front motor, but it is several times smaller than an average gas engine and closer to the ground.

An engine in the front could have exercised pressure on the passenger cabin, but instead, the front of the Model S acts as a giant crumple zone to absorb the energy of the impact.

Tesla CEO Elon Musk likes to use the analogy of a pool to describe the effect a crumple zone has during an impact:

“it’s just like jumping into a pool from a high diving board — you want a deep pool and one without rocks in it.”

The driver added that he “can’t see himself ever driving any other car than Tesla” and can’t wait to order a new one.

That’s something that we hear often following similar accidents, like when a truck ran into the frunk of a Model X, destroying it in the process, but leaving the passenger cabin intact.

We could actually be witnessing an unintended impact of the electrification of passenger cars – larger crumple zones leading to fewer injuries and deaths in frontal crashes. More data would be needed, but we already have several interesting examples despite the relatively small numbers of EVs on the road today.

If you like our content and it helps you follow Tesla or in your potential ownership of the car, please consider using our referral code for $1,000 in credit at the purchase of a new Model S or X. We promise to use the prizes of the referral program to improve our coverage of the company.