Earlier this week, a 18-year old took her father’s Tesla Model S for a ride with 4 of her friends in Pullach, Germany. She was reportedly driving at an excessive speed and lost control in a turn. The vehicle jumped off-road “and flew 25 meters [82 ft] through the air” then subsequently crashed in a field at full speed before rolling over at least once.

It takes a lot of speed to flip a 5,000 lbs Model S with a low center of gravity, but fortunately and despite the severity of the crash, none of the 5 occupants in the Model S died.

In fact, all five were all able to exit the vehicle without the help of the first responders, though their injuries were described as “serious but non-life threatening” and they were transported to the hospital by helicopter.

Pictures of the accident show that the front-end of the Model S is completely destroyed while the cabin itself remains whole. This highlights the importance of a large crumple zone, like the Tesla Model S’ front trunk (frunk), something easier to design with electric vehicles due to the lack of engines and the use of smaller motors.

An engine in the front could have exercised pressure on the passenger cabin, but the lack of engine in the font of the Model S acts as a giant crumple zone to absorb the energy of the impact.

Tesla CEO Elon Musk likes to use the analogy of a pool to describe the effect a crumple zone has during an impact:

“it’s just like jumping into a pool from a high diving board — you want a deep pool and one without rocks in it.”

Hopefully the 5 young adults recover quickly and can learn something from this accident.

Update: For people wondering how it flew 82 ft through the air, here’s the ramp it hit at full speed (hat tip to Marc Kudling): 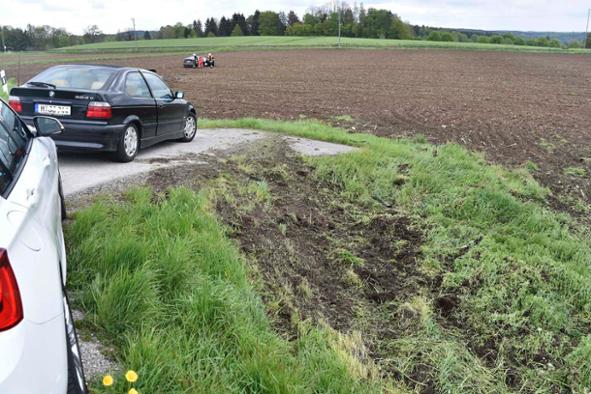 Our recent articles on Tesla: