After the Christmas break, the markets reopened today and Tesla was among the top movers thanks the announcement that they signed a deal with Panasonic to invest over a quarter of a billion dollar in the manufacturing of solar cells and modules at Tesla’s factory in Buffalo.

Tesla’s stock (TSLA) opened 4% higher before settling down at about $220 per share.

The automaker’s stock had a rough few months since the announcement of the merger with SolarCity, but it started recovering in December.

The stock gained over 17% over the last month and it is up 13% since the shareholders of both Tesla and SolarCity approved the merger.

Nonetheless, the price per share is still about 15$ below 2016’s starting price: 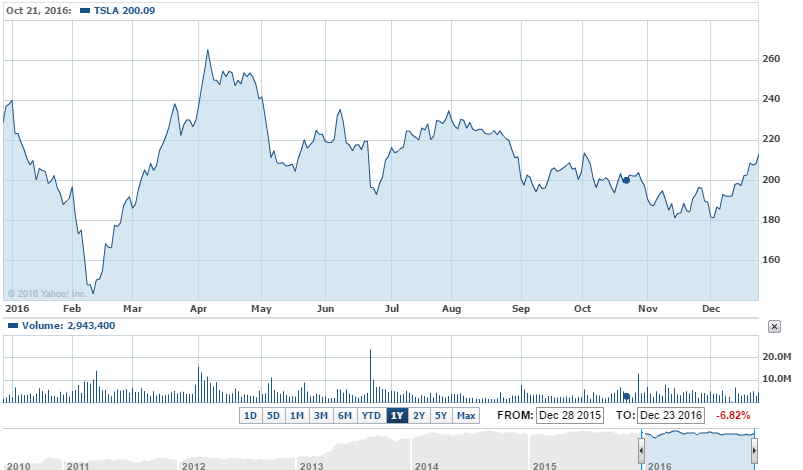 Today, it’s definitely the closing of the Panasonic deal that’s helping the company’s stock. When Tesla CEO Elon Musk announced his intention to merge Tesla and SolarCity, critics of the deal were concerned of the solar company would put a strain on Tesla’s cash balance while Musk surprisingly said that he expects the company to contribute to its cash instead.

It wasn’t clear how that would be accomplished, but last week SolarCity sold $241 million equity in its solar portfolio and now Panasonic’s $250 million investment in the Buffalo plant is money Tesla will not have to get out of its pocket to start producing solar products.

Instead, the long-term purchase agreement will have Tesla pay for the solar modules and the solar cells only when they will start producing and when they can sell them to the end users.

The next big catalyst for Tesla’s stock is the delivery numbers for the fourth quarter due next week. Tesla needs to deliver just over 25,000 vehicles to achieve its goal.