Since the beginning of the decade, investments in electric vehicle startups haven’t represented anything too impressive, but it still trended at a healthy $800 million per year from 2010 to 2012. In 2013, the bankruptcy of a few startups, namely Fisker, A123, and Better Place, spooked the investment community and virtually stopped money from going into EV ventures.

It took a while for the industry to convince investors to send money their way again, but thanks to the successes of companies like Tesla, the electric vehicle startup space is now in a better place than ever. According to a recent report, electric vehicle startups are on pace to raise $2 billion in 2016 – an increase of over 100% from last year.

EV startups have raised more this year than during the last 3 years combined, according to CB Insight’s report. 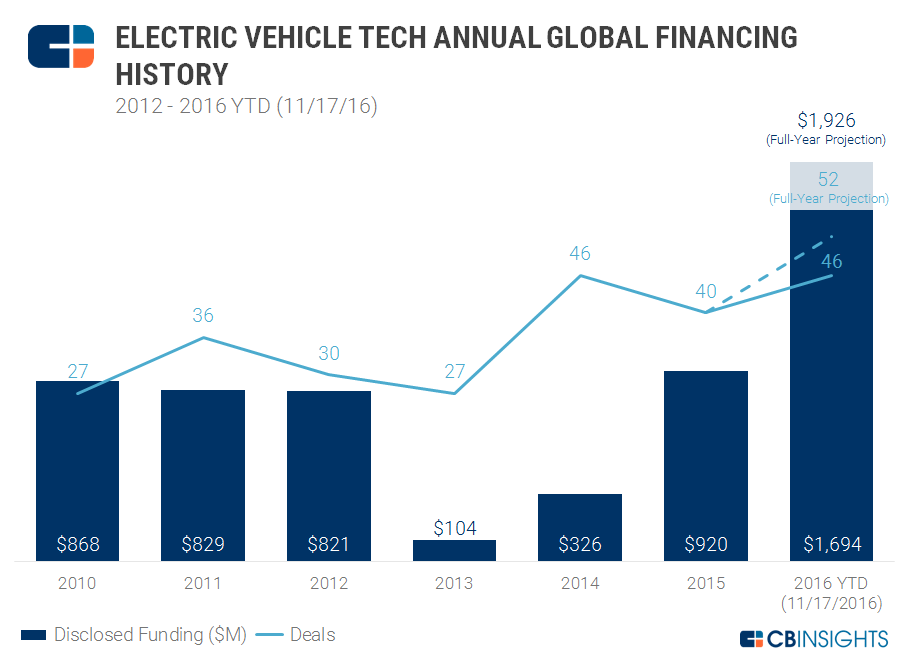 The research firm reports that the record year was driven by several “mega-rounds” of financing. For example, NextEV reported having secured over $500 million in investments. Several other companies have managed to close massive $100 million and more rounds, like Future Mobility, Faraday Future, and Lucid Motors (formerly Atieva).

CB Insight also mentions Zoox, a stealthy California-based startup with a focus on autonomous driving, but for its own electric vehicle platform for ride-sharing. The company reported closing $250 million in funding this year across two rounds, bringing the valuation of the company to unicorn level.

Smaller rounds have also contributed to the record year. CB Insight listed a few in its report:

While statistically speaking, some of those companies will inevitably go under, it is still an exciting time for the electric vehicle space since we will only feel the impact on this record year of investments in the coming years.